Day 1 in Boston. We walked to Quincy Market and Faneuil Hall from our hotel near the Aquarium. Weather was gorgeous! The Quincy Market food court was still very empty, so we decided to grab breakfast there. There really weren’t many breakfast options available, and I had no interest in grabbing a bagel. (Yep, I live in NYC, which is basically the city of bagels, and I don’t really like bagels.)

Al Mercatino at Quincy Market
I had low, *very low* expectations because this is a touristy area, but I didn’t think it would be that bad. We ordered from this place because it was the only option in the marketplace with the breakfast foods we wanted. Two breakfast paninis, an egg sandwich, orange juice and bottle of water came to around $35. Ugh.

As soon as they started preparing my panini, I knew that we had made a terrible mistake. A couple miserable looking pieces of bacon were wrapped in a large egg patty. The patty and cheese were placed on the bread after the bread had been grilled. Uhh, aren’t you supposed to grill/press the panini AFTER it has been assembled? The panini ($8+) was huge, but incredibly bland. No salt, no pepper. Cheese was a tasteless, gooey mess. The bread was hard and kept scratching the roof of my mouth. Yes, I was actually injured by this panini.

Don’t think my sister was too pleased with her sandwich either. I regret not pigging out on a lobster roll that morning. Sure, it would have been overpriced, but anything beats the awful food from Al Mercatino. This was the first time I’ve given a restaurant/food vendor a 1-star review on Yelp. Best part about breakfast: seating on the second floor!

Espresso Royale Caffe on Newbury Street
After breakfast, we wandered along a portion of the Freedom Trail, walked through Boston Common and Public Garden, and ended up on Newbury Street. Love exploring the city on foot, especially as the last time I visited Boston was over 20 years ago. Our poor feet got tired, and we were stopped for iced teas.

Chill place on Newbury Street. No wait to order, and we got our drinks almost immediately. Staff is friendly, but they screwed up our order. Three iced teas: 1 green, 1 crimson berry, 1 red zen. It’s not that hard. By the way, the red zen is fantastic. Lovely blend of flavors. None of the outdoor tables are level. Wobble, wobble, wobble. Kept thinking we would spill our drinks.

After our iced tea stop, we continued along Newbury Street. Walked by the Church of Scientology and on to the Boston University campus before we started looking for food.

Noodle Street
Late lunch at Noodle Street. My sister mentioned this place was recently renovated. Nice space for a casual lunch. They didn’t do a good job with the cushioned seats along the walls. The seats are not deep enough and the backs are too plush. You’re basically forced to sit completely upright. Not comfortable at all.

Dad ordered the Pad Thai with vermicelli and chicken ($7.95). Looked really bland, but apparently tasted okay. Barely had any chopped peanuts though.

Average experience overall. Service was decent, but they do seem a bit inexperienced. I appreciate that the food was brought out quickly. Classic takeout food at a reasonable price. Portions are too small to share, but too big to eat on your own. 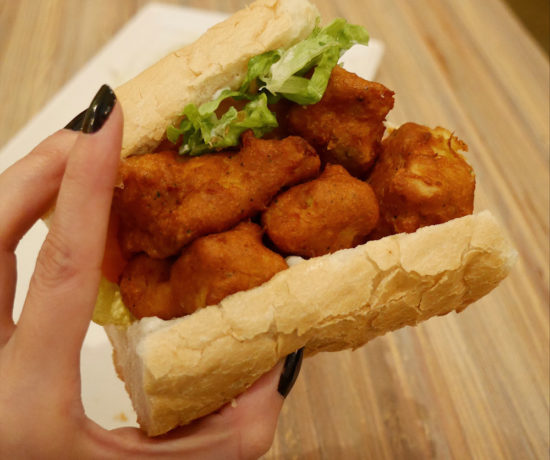