I’ve got three words for you: Eat Drink Vegan. Previously known as the Vegan Beer Fest, Eat Drink Vegan started in 2009 as a small gathering in the parking lot of The Roxy Theater. Today, it’s the biggest vegan festival in the country, drawing over 10,000 attendees from around the world to the Rose Bowl for a day of vegan eats and unlimited pours. I recognized lots of people from Instagram, and just not Insta-famous grammers. All the vegans came out to play.

This year’s EDV teamed up with Seed to be the grand finale to Seed Food & Wine Week LA. My Seed Summit pass included VIP Admission to Eat Drink Vegan. Hello larger tasting glasses, fast pass lines, early admission, and VIP lounge with exclusive pours! We arrived around 11:20am and were among the first 30 people in line, patiently waiting for the gates to open at noon. After Seed Summit and Seed Grand Tasting, I was pretty worn out, but chatting in line about which food vendors to try first got my energy levels back up again.

As soon as we entered Eat Drink Vegan, we stopped by Poseidon Brewery for the Grapefruit IPA before making our way to the first food vendor on my list: the one and only Herbivorous Butcher. Hailing from Minneapolis, Kale and Aubry are a brother sister team who specialize in small batch handcrafted vegan meat alternatives. At Eat Drink Vegan (and this year’s Coachella!), they were serving up their impressive Country Fried Steak Double Down with hickory bacon, tofu egg, and sausage gravy. Holy moly. This beast of a creation was intense, and the flavor and texture of the chicken steaks were phenomenal. #whatatimetobealive The next hour or so was spent in Double Down coma as that sandwich (if you even call it a sandwich) was a hefty portion even after dividing it in half. 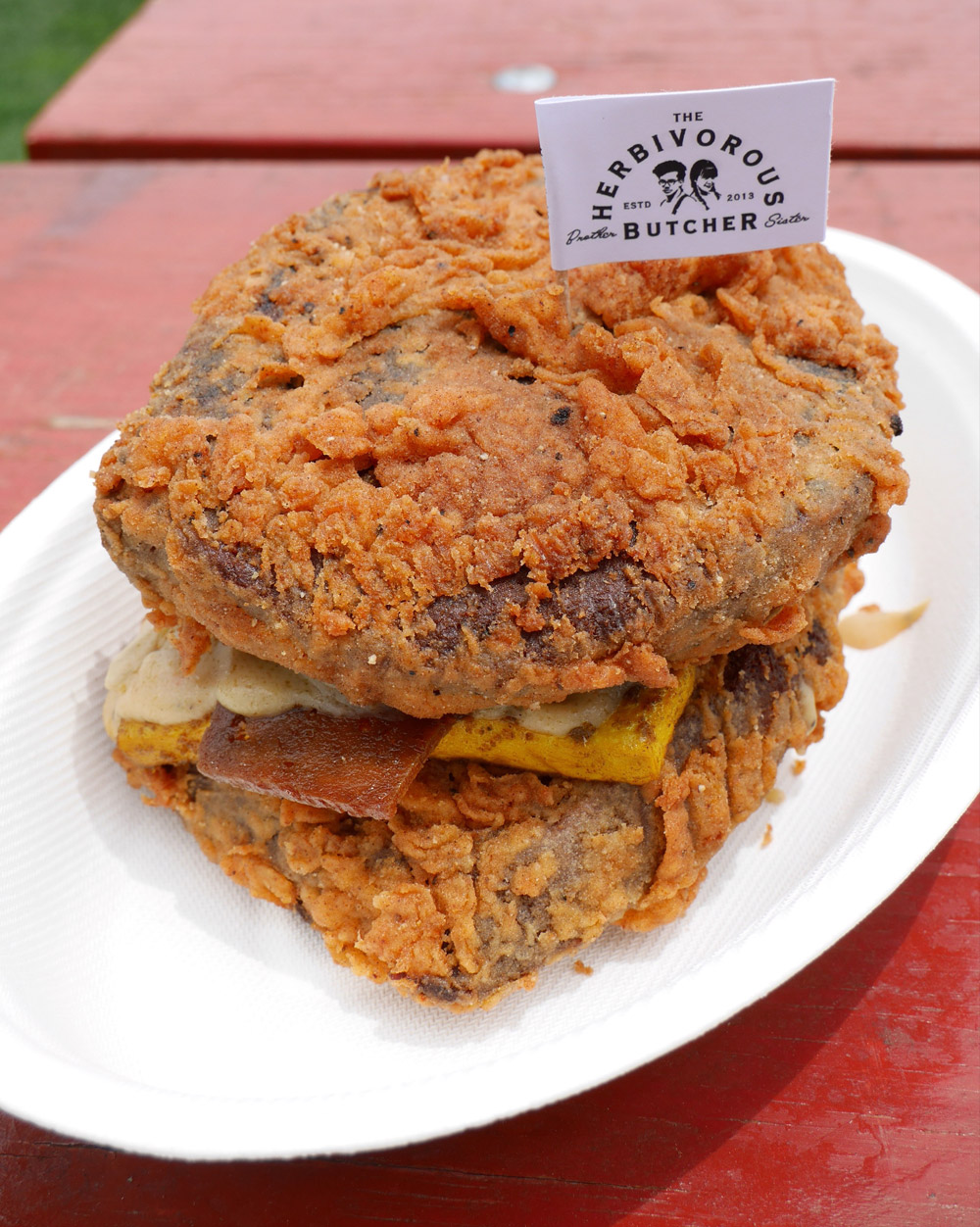 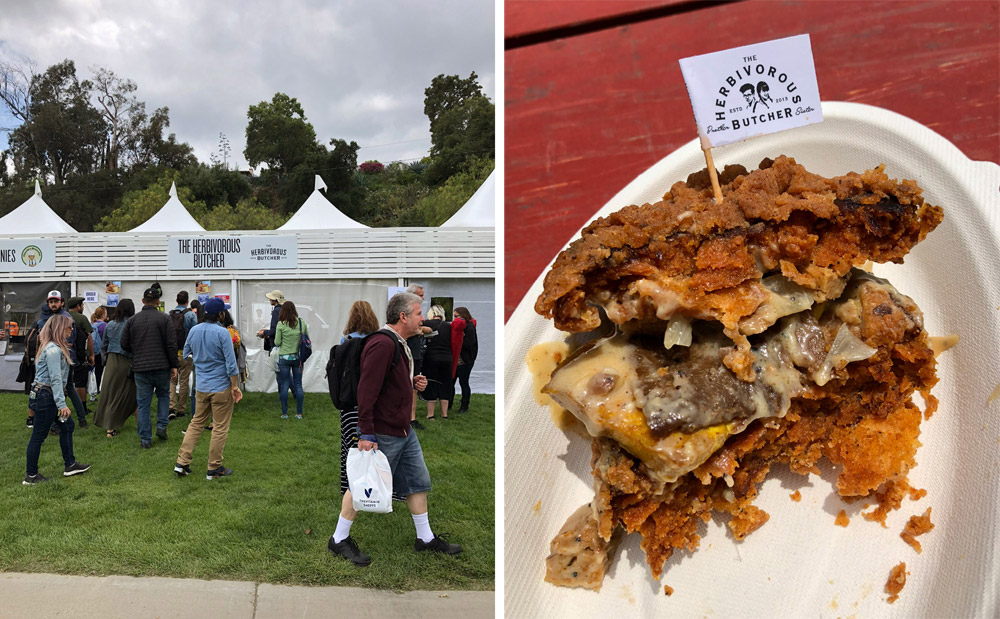 For me, the main attraction at Eat Drink Vegan is the food (duh!). The lineup included vendors from around the country, as well as a handful from the UK. I made my list and checked it twice, but I did not make it through my entire list. Even if you’ve got buddies to share food with, you can only have so many burgers/sandwiches in one day. After the Double Down, we switched to smaller items: mac & cheese from Little Pine (Moby’s restaurant, which donates 100% of profits to animal charities), sushi rolls from Shojin, and spicy ramen from Ramen Hood (overpriced for such a small bowl, but definitely hit the spot).

If food isn’t your thing (who are you?!), there are unlimited pours from over 250 beverage vendors at Eat Drink Vegan. Beer, wine, cider, kombucha, cold brew, craft soda… where do you even begin? The larger VIP glasses allow you to get a full pours of your favorites. I drank so much kombucha at EDV, including GT Kombucha’s tap exclusives and Boochcraft’s 7% abv boozy booch. The cider bar had an Imperial Rose cider from Eden Ciders that’s as full, juicy, and boozy (11% abv) as a rose. 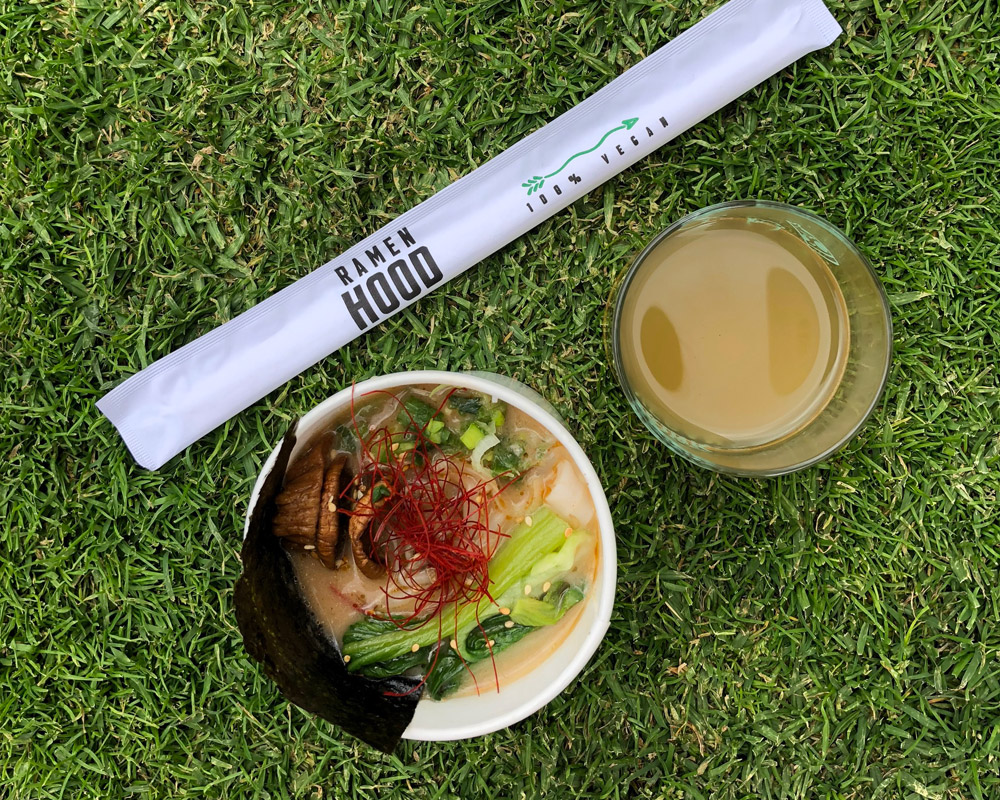 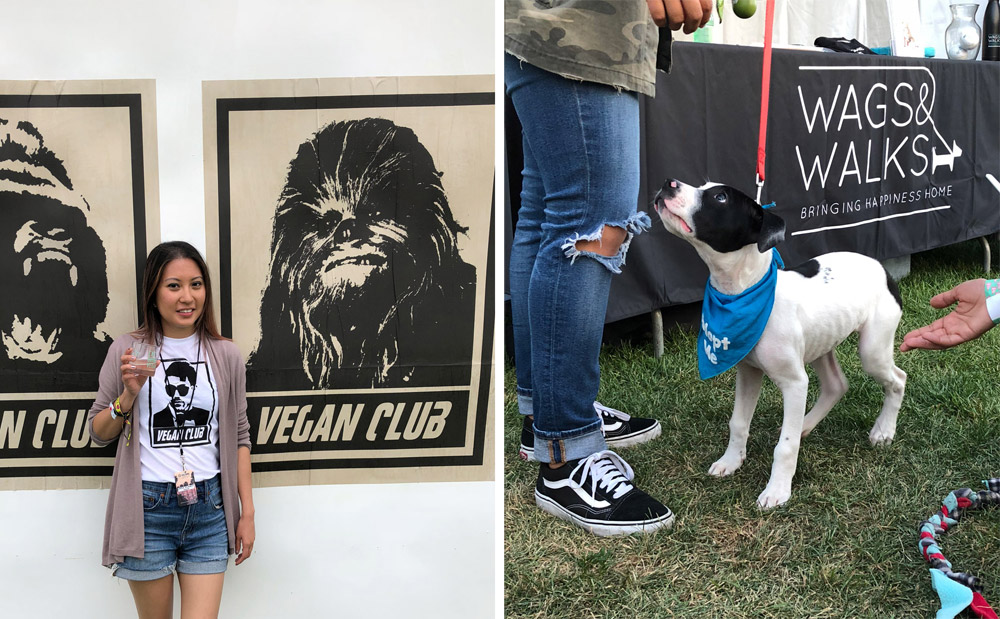 When we needed a break from the eats and drinks, we stopped by to say hello or more like “rrrrrrr-ghghghghgh!” to Chewbacca, one of the newest members of Vegan Club. I figured all the cool kids would be wearing their best vegan shirts so I wore my Vegan Club tee for the occasion. In retrospect, a white shirt probably wasn’t the best choice for a day of eating and drinking, but I miraculously didn’t spill any food/drinks on myself. John, on the other hand, got so much booze on his sneakers.

For my final eats at Eat Drink Vegan, I kept it classy by double fisting Shake Shack’s brand new vegan burger and Monty’s Good Burger, which has been described as vegan In & Out. Back when I was a vegetarian and living in NYC, I loved Shake Shack’s Shroom Burger. The vegan Veggie Shack was released a couple months ago and is a combo of black beans and roasted beets. It’s description never struck me as that appealing, but it was much tastier than I expected. Monty’s was totally killing it with their burger though. You gotta make yours a double with two Impossible patties, vegan cheese, and classic toppings. Sorry Shake Shack, but Monty’s and its adorable mascot, are the winners here. 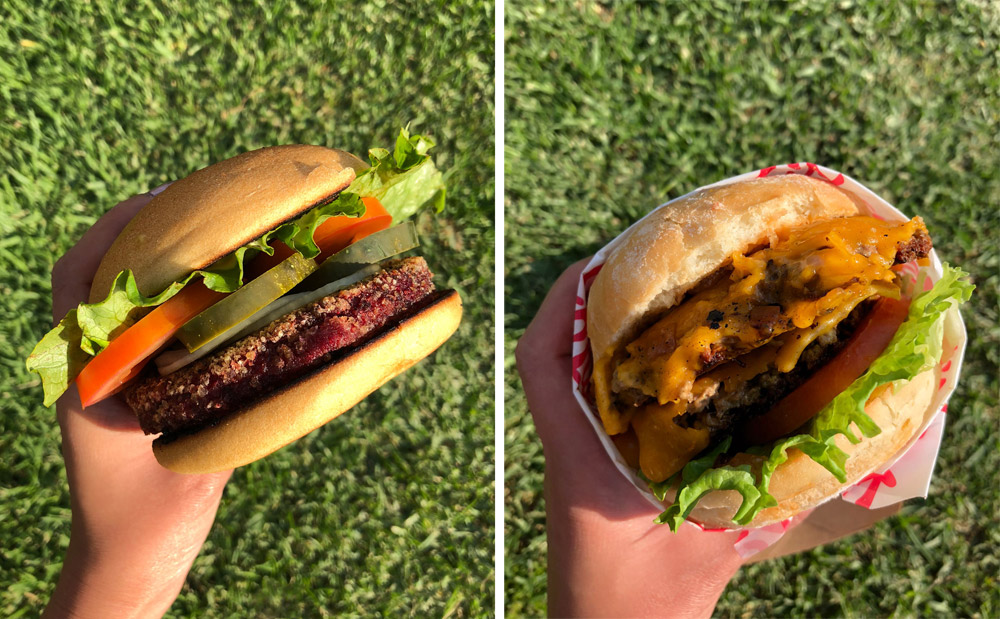 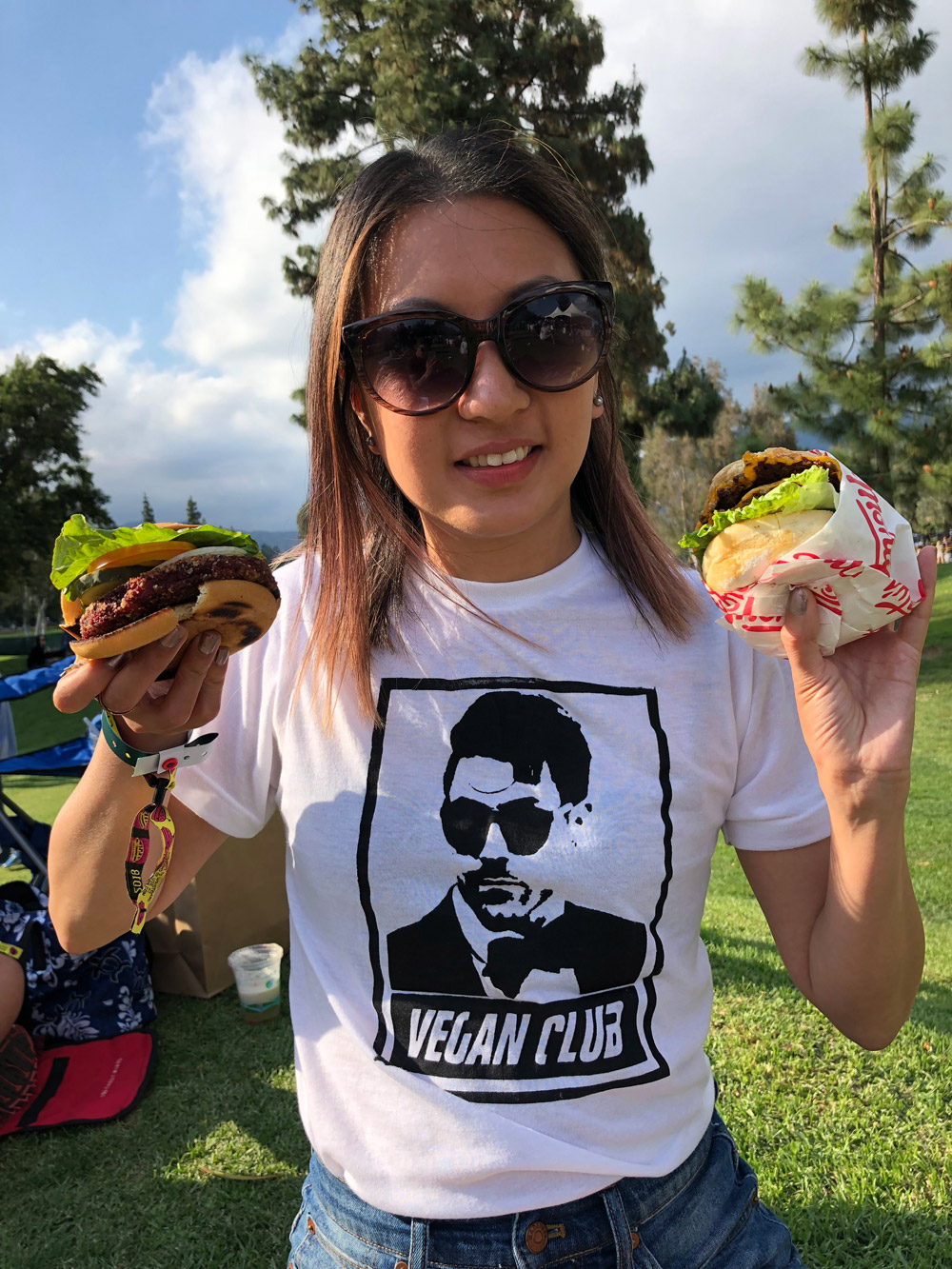 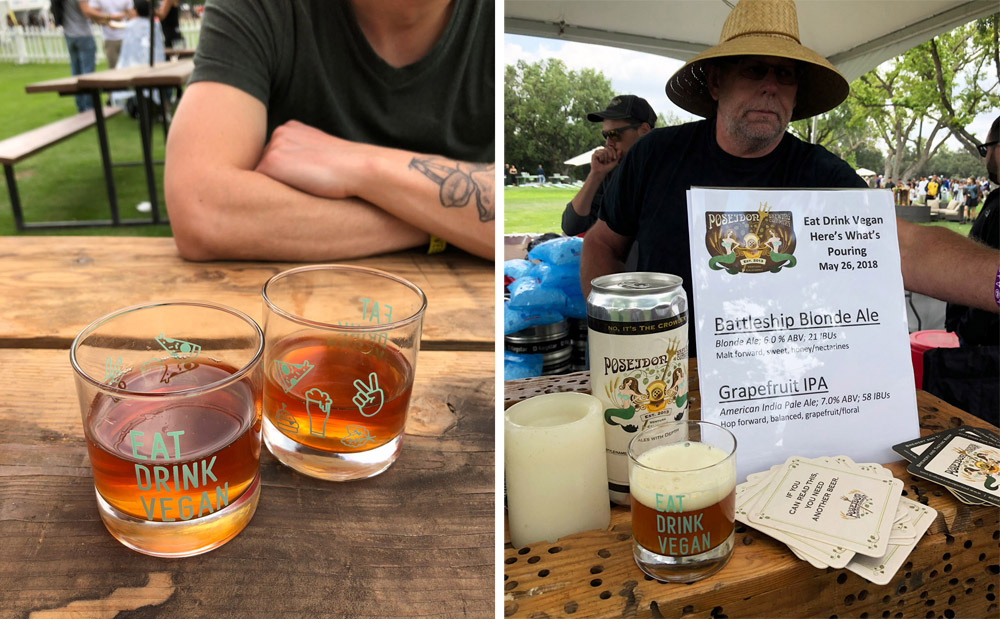 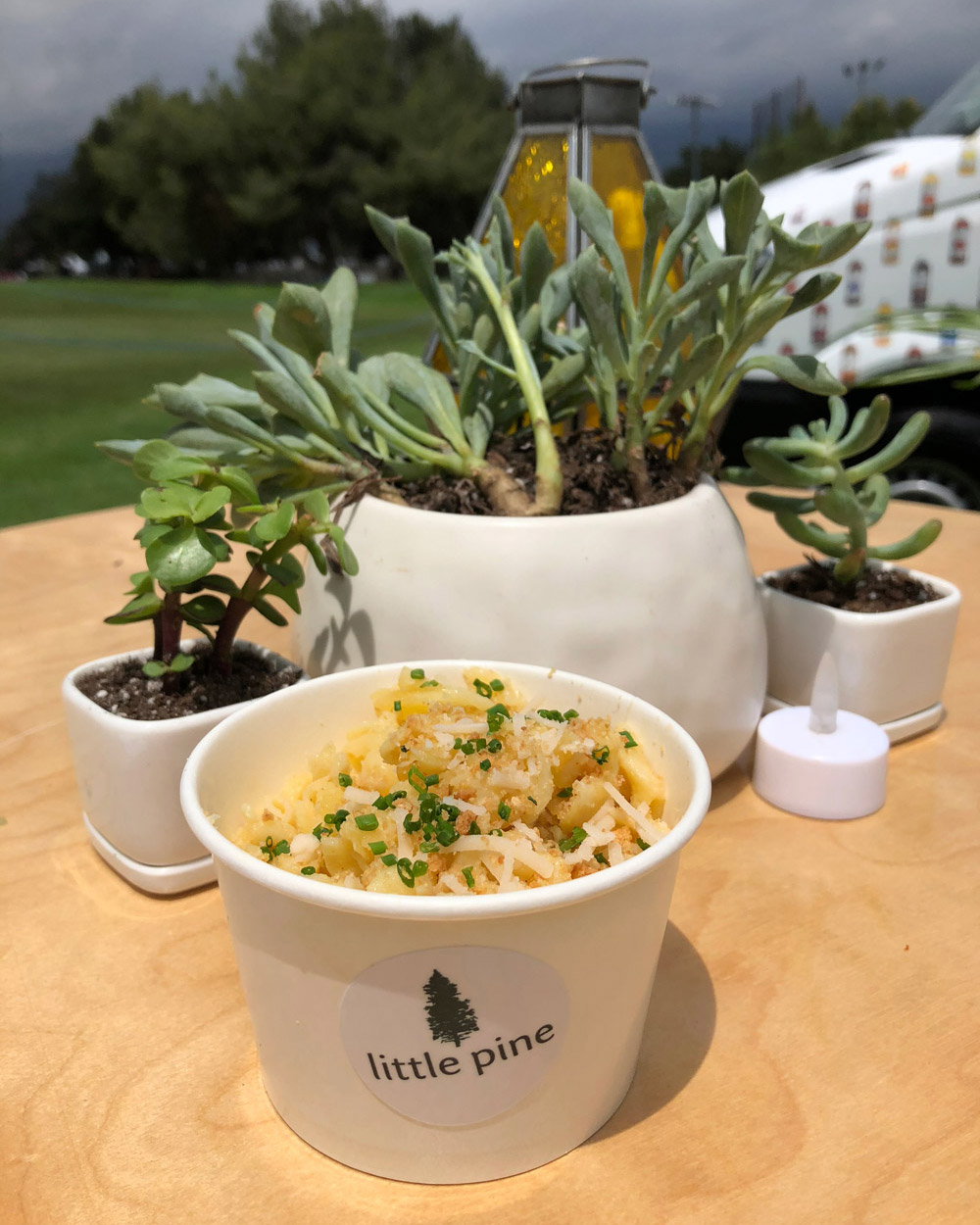 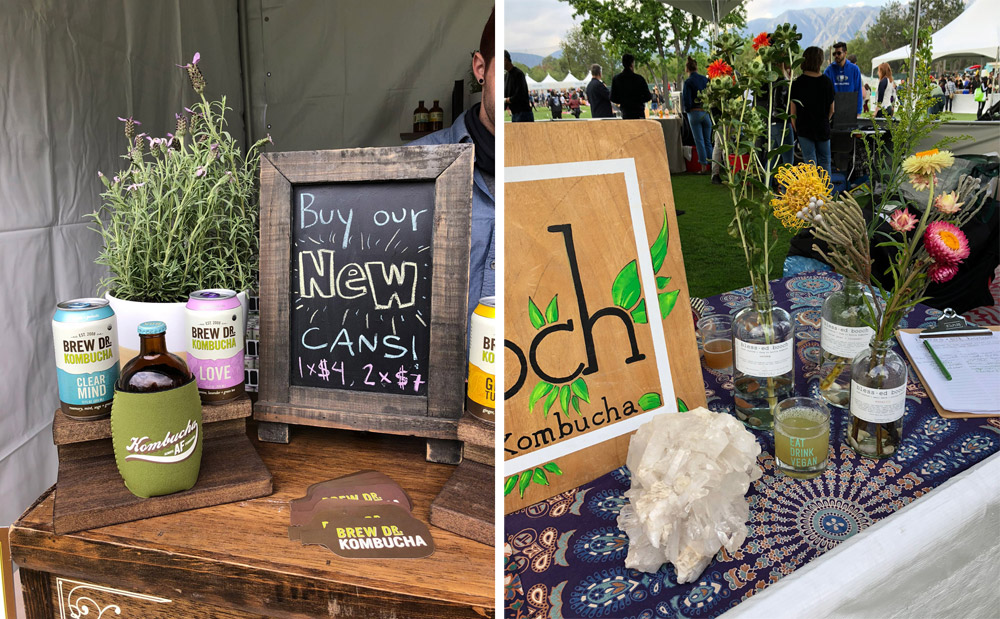 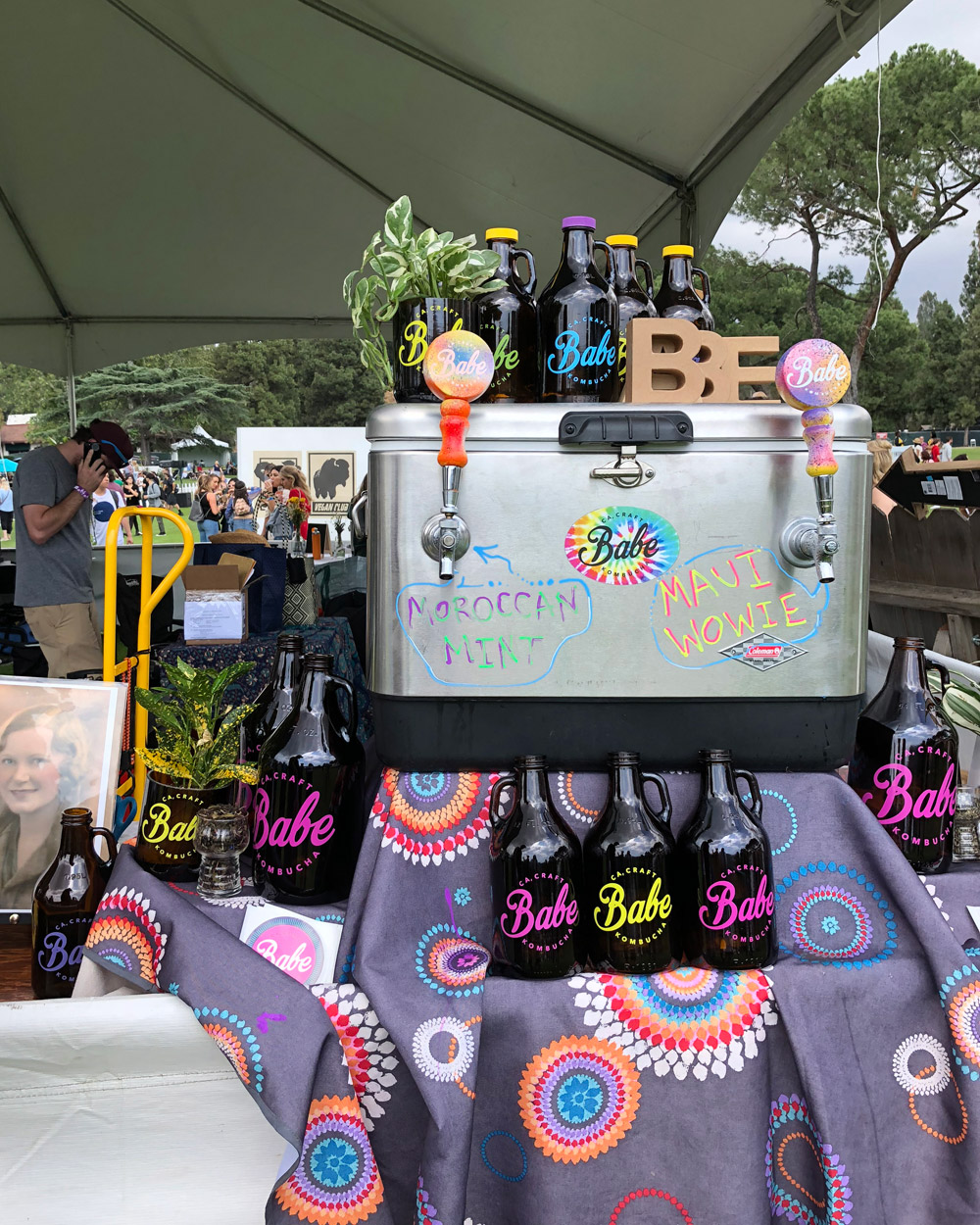 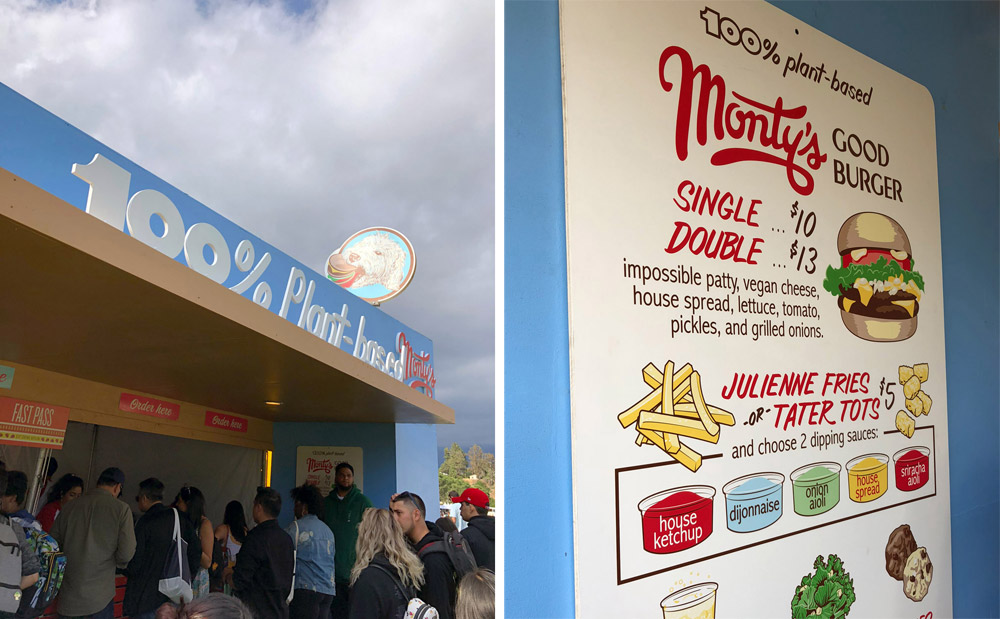 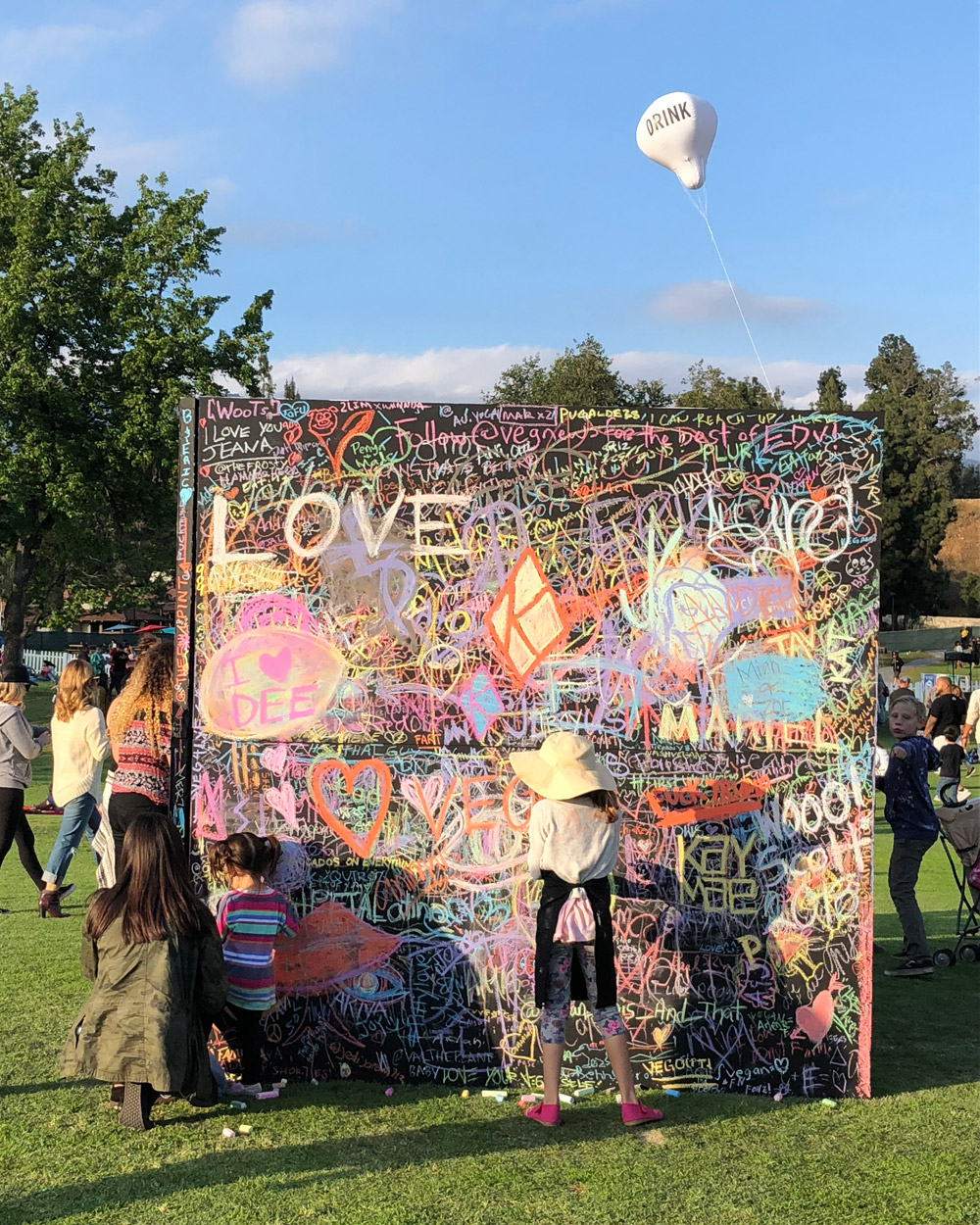 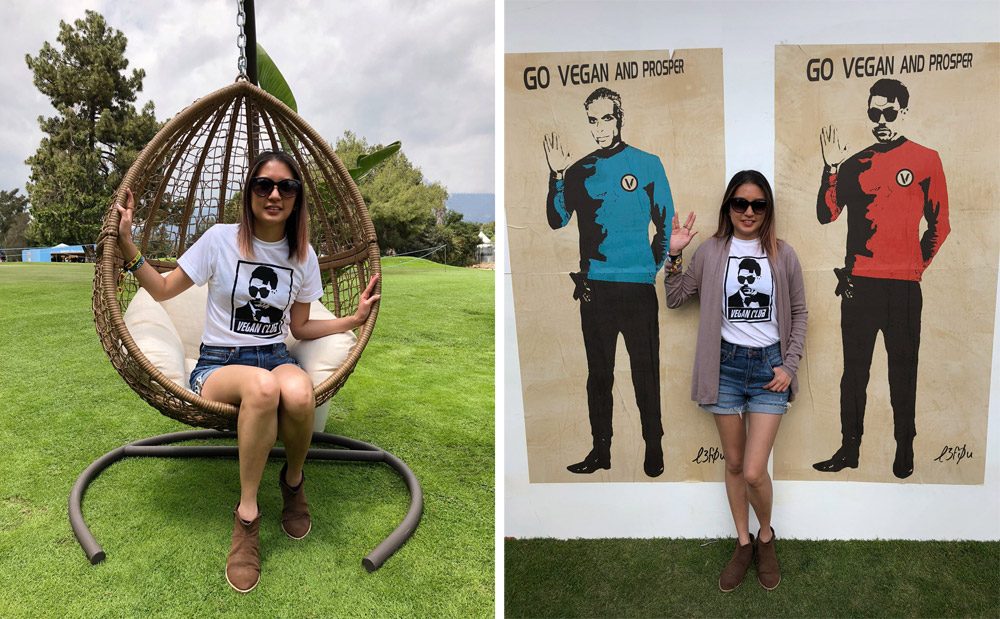 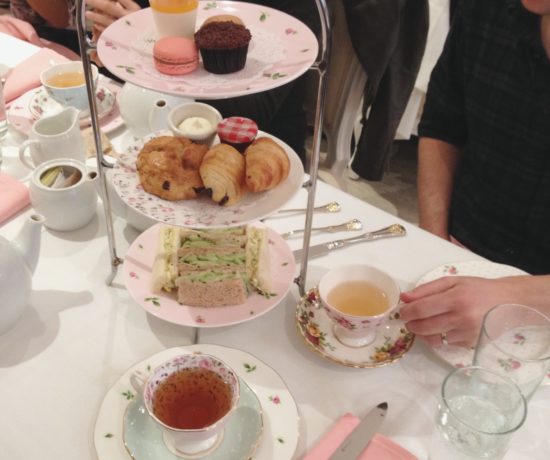 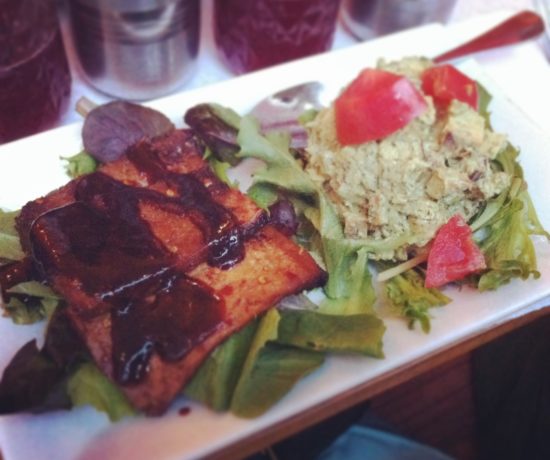 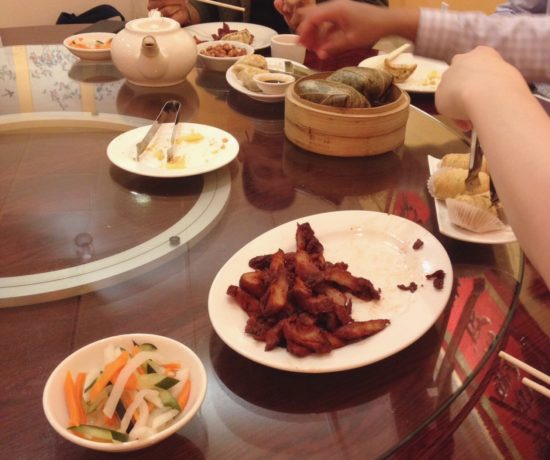