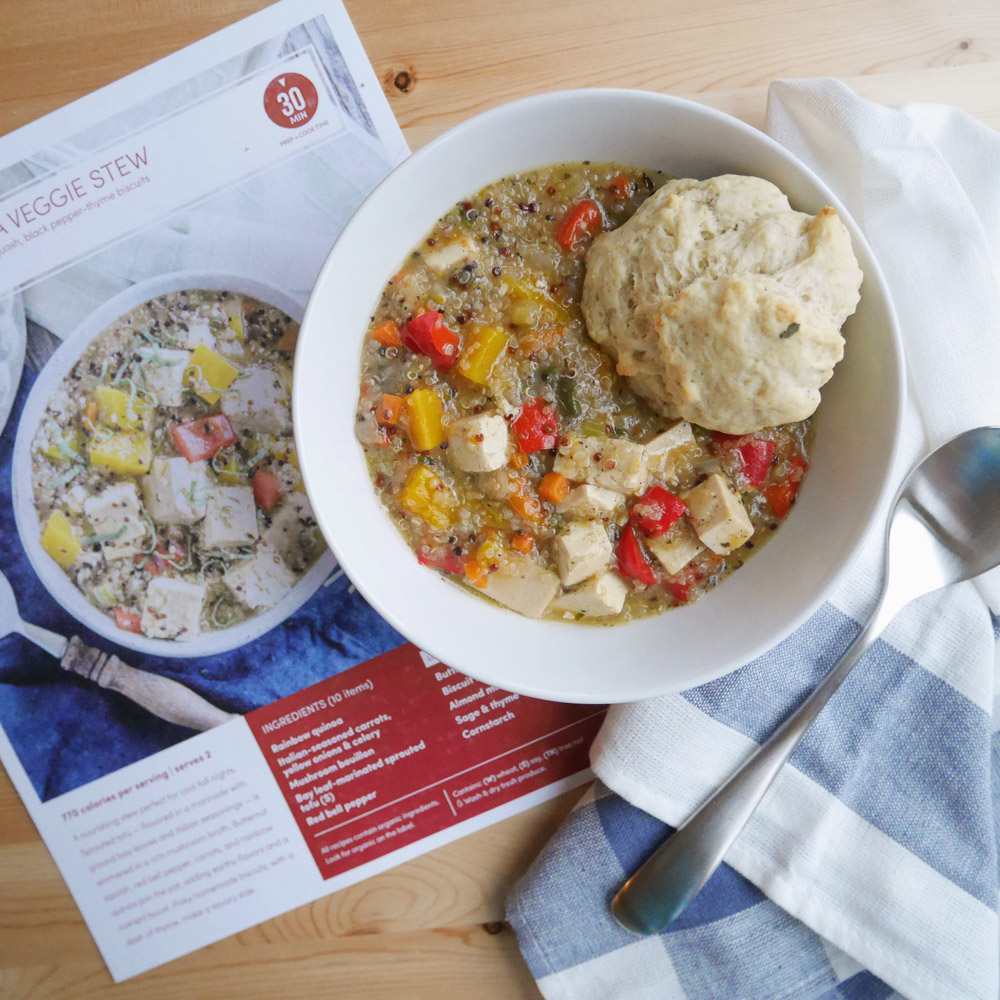 I recently signed up for a one week subscription of Green Chef organic food delivery. I’ve been invited to try out and review similar services in the past, but this time around, I signed up on my own after receiving a $50 off coupon in the mail. I thought this might be an interesting little experiment. (This is NOT a sponsored post.) The 2-person vegan meal plan with three meals came out to just under $80 before applying the coupon. Everything was delivered in one big insulated box straight to our doorstep.

The truth is I have a hard time getting excited about most meal delivery and food delivery services, but let me take you through the pros and cons of my Green Chef experience:

THE PROS
• With most delivery services, the vegan and vegetarian options are a sad afterthought. That’s not the case here. As someone who is almost entirely vegan and a food blogger, I thought Green Chef’s vegan and vegetarian menus were very appealing. The $50 coupon wasn’t enough to get me to sign up, but the vegan menu and mouthwatering photos did the trick.

• Each of the three meals in my delivery took 30-35 minutes to prepare, and I kept the visual recipe cards so I can recreate the recipes on my own. It’s handy that all the ingredients are color coded by recipe; not all food deliveries have adopted that system.

• I love cooking with fresh herbs, but when I buy herbs at the grocery store, I don’t always use it all up in time. Green Chef gave me exactly the amount I needed for each recipe, which usually just a sprig or two. 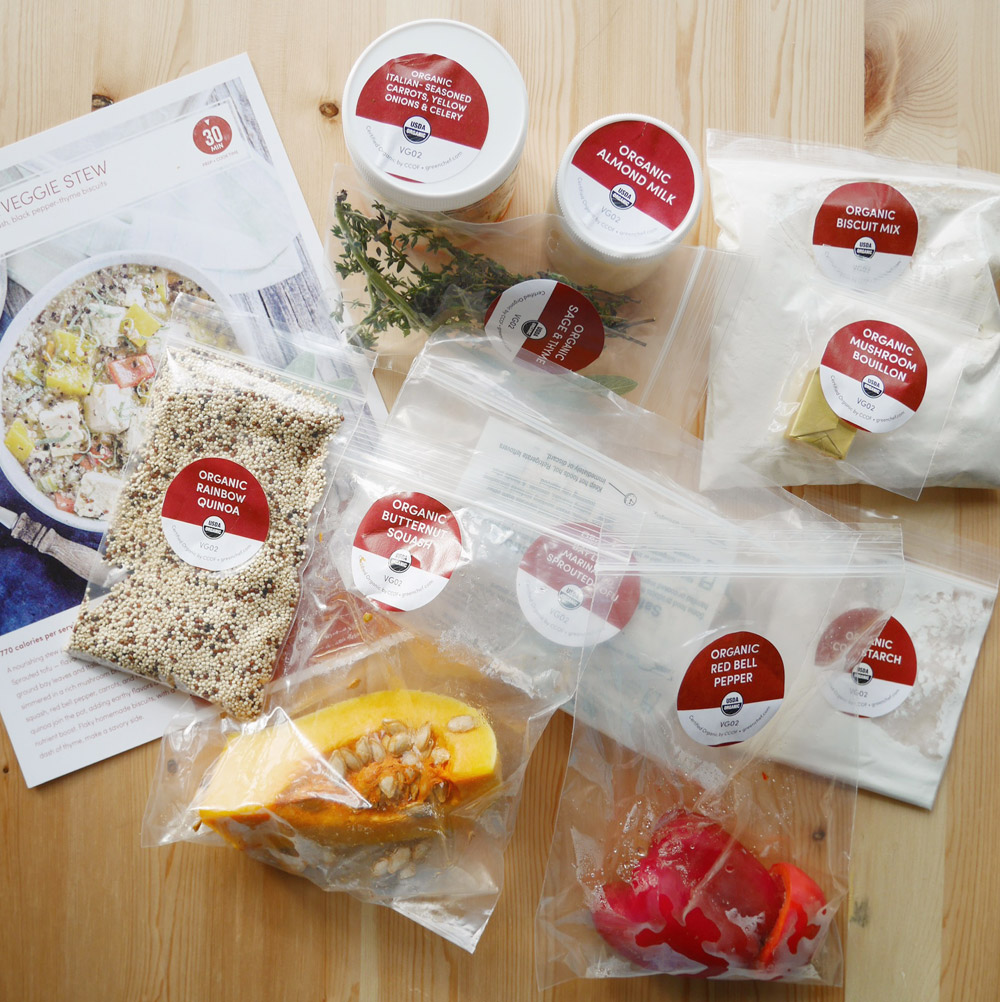 THE CONS
• You already know this one: delivery services are expensive compared to the grocery store. In this case where they’re only delivering ingredients, you still have to do the cooking! It varies slightly depending on where you live, but it is possible to eat out at restaurants for the same price as Green Chef and not deal with cooking or washing dishes.

• When you’ve got three meals of ingredients in the fridge, you’re pressured to cook ASAP before anything goes bad. My delivery arrived on Friday evening and with Halloween weekend plans, I didn’t get around to cooking any Green Chef meals until Sunday. At that point, the leafy greens were not in the best shape and had to be picked through.

• Green Chef’s eco-friendly packaging is reusable and recyclable, but it’s still A LOT of packaging. Every recipe had around ten ingredients, and I was surprised by how much room it took up in my fridge. The insulating blankie made of plant fibers is compostable, but my apartment building, unfortunately, doesn’t have a compost bin.

• While the dishes are relatively simple, they are not one pot meals. You need to have a well equipped kitchen and enough counter space for basic prep. One of the recipes needed two pans and one pot, as well as a microplane for zesting. I own a microplane now, but it wasn’t in my arsenal when I was a cooking newbie. Back then, I might not even have owned two non-stick pans. 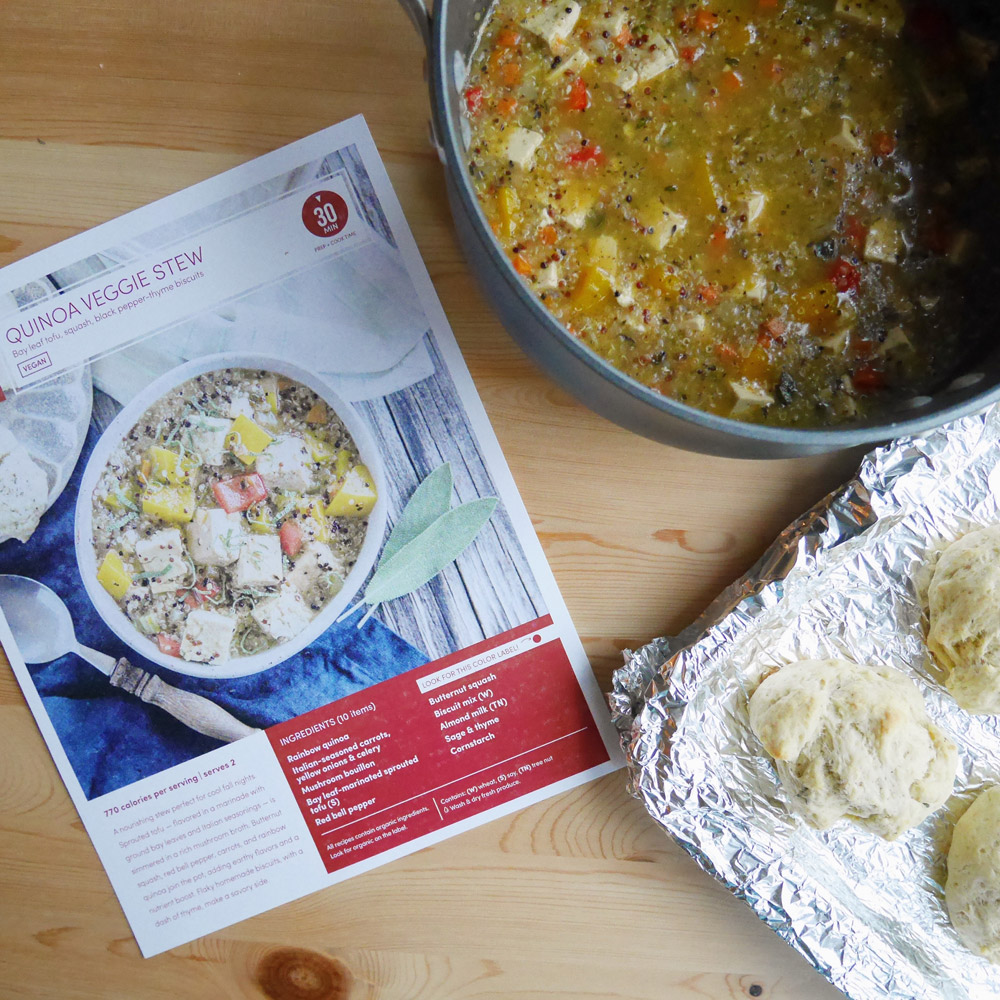 Whenever I use a service like Green Chef, I always wonder who the average user is and who I would recommend the service to. John describes any and all meal delivery services as “millennial yuppie nonsense,” and we both agreed that it would be absurd to use a food delivery service on an ongoing basis. That said, if you’re new to cooking, a food delivery service isn’t a bad way to get inspired and learn some new kitchen skills.

Let’s talk about the food! Just focusing on the food alone, I’d say that Green Chef’s vegan options are the best I’ve seen from any food delivery service. They’re not sad, boring salads, but filling and satisfying meals that even a non-vegan would enjoy.

Quinoa Veggie Stew with Bay Leaf Tofu, Squash, Black Pepper Thyme Biscuits
The quinoa veggie stew with flaky biscuits were perfect for a chilly fall evening of binge watching Harry Potter movies. I enjoyed this so much that I’ve already recreated this stew on my own using odds and ends from the fridge. Adding quinoa to a stew is such a great idea.

Sun-Dried Tomato Farfalle with Kalamata Kale Salad, Caper Vinaigrette, Pine Nuts
To be honest, the farfalle with kale salad was the recipe I was least excited about mainly because I cook pasta regularly. The sun-dried tomato sauce with cremini mushrooms and artichoke hearts was tasty though. The artichoke hearts gave it a real meaty feel. 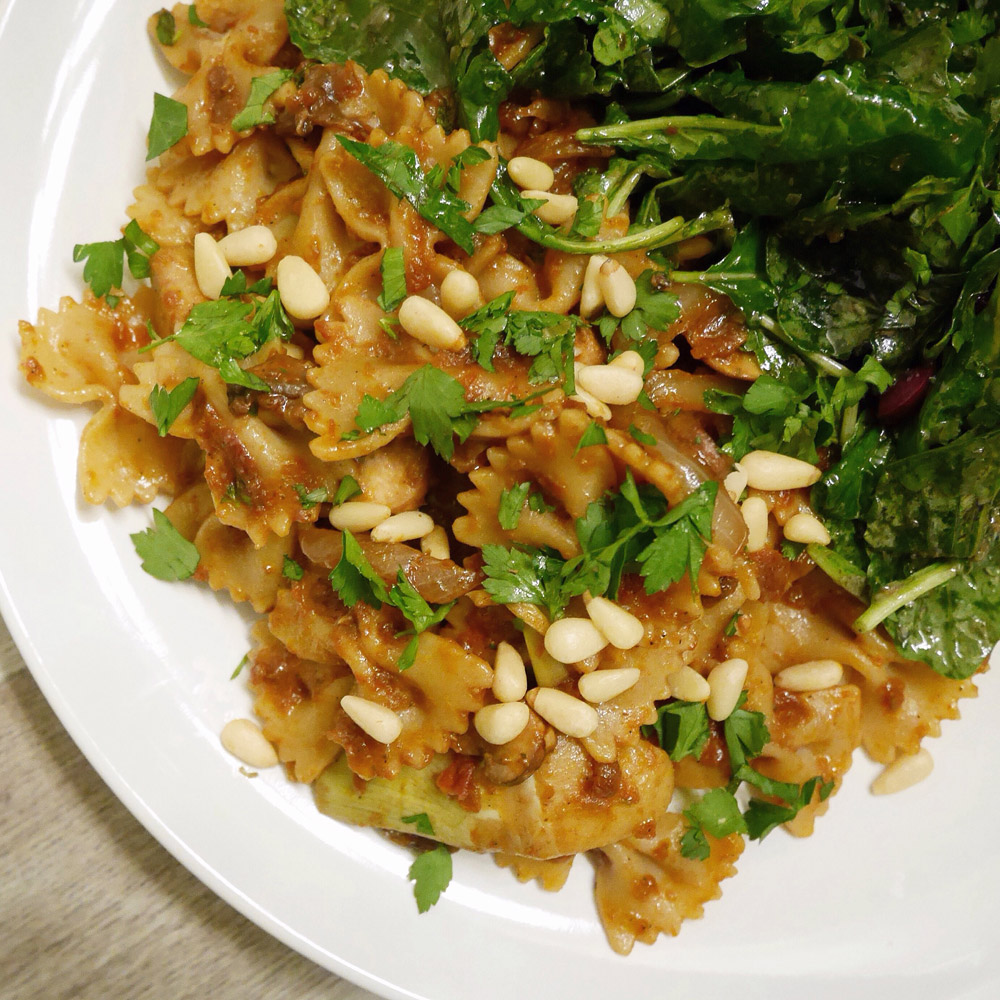 Chorizo Seitan Arepas with Pepita Brown Rice, Pinto Beans, Corn, Cashew Crema
I’ve never tried Upton’s Naturals seitan chorizo before, so this was a nice introduction to that as well as cooking arepas. This was my favorite of the three recipes in the delivery, and it also turned out to be extremely filling. I divided my half of the recipe into two portions: one for dinner, one for lunch the next day. 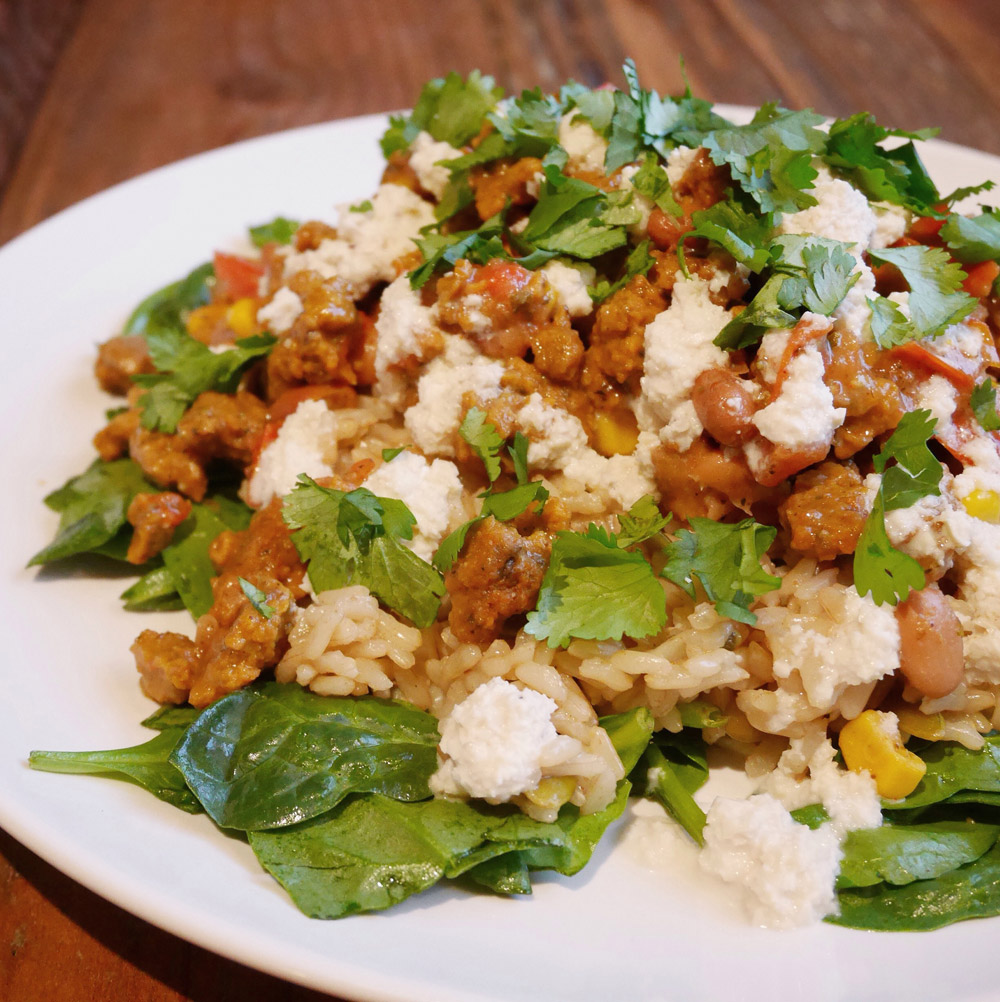 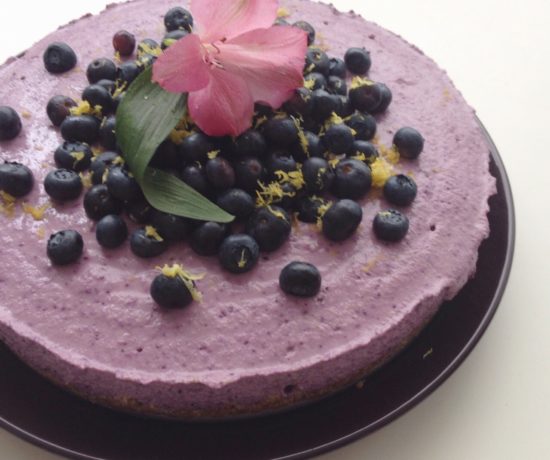 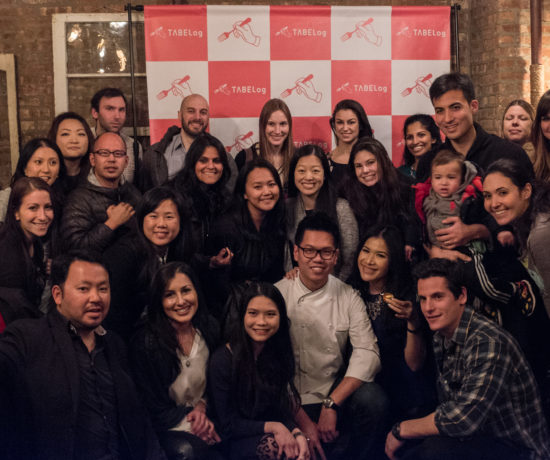