Over Labor Day weekend, I took a trip back to Pittsburgh for a wedding. I feel like I’m still playing catch up on all sorts of things since that trip, and in a week, I’m doing another quickie trip to DC, also for a wedding. Anyway, my 48 hours back in the ‘burgh were very rushed, but here’s what I managed to squeeze in…

My friend Liz and her husband Dan picked me up from the airport (thanks guys!) and from there, we went straight to Double Wide Grill for dinner. I came here on my last visit and was happy to be back as they’re known for having plenty of meatless options. The seitan wings were good although Cletus’ hot sauce was more heat than we had bargained for. Seems like they over fried a few of the seitan chunks making them way too tough. 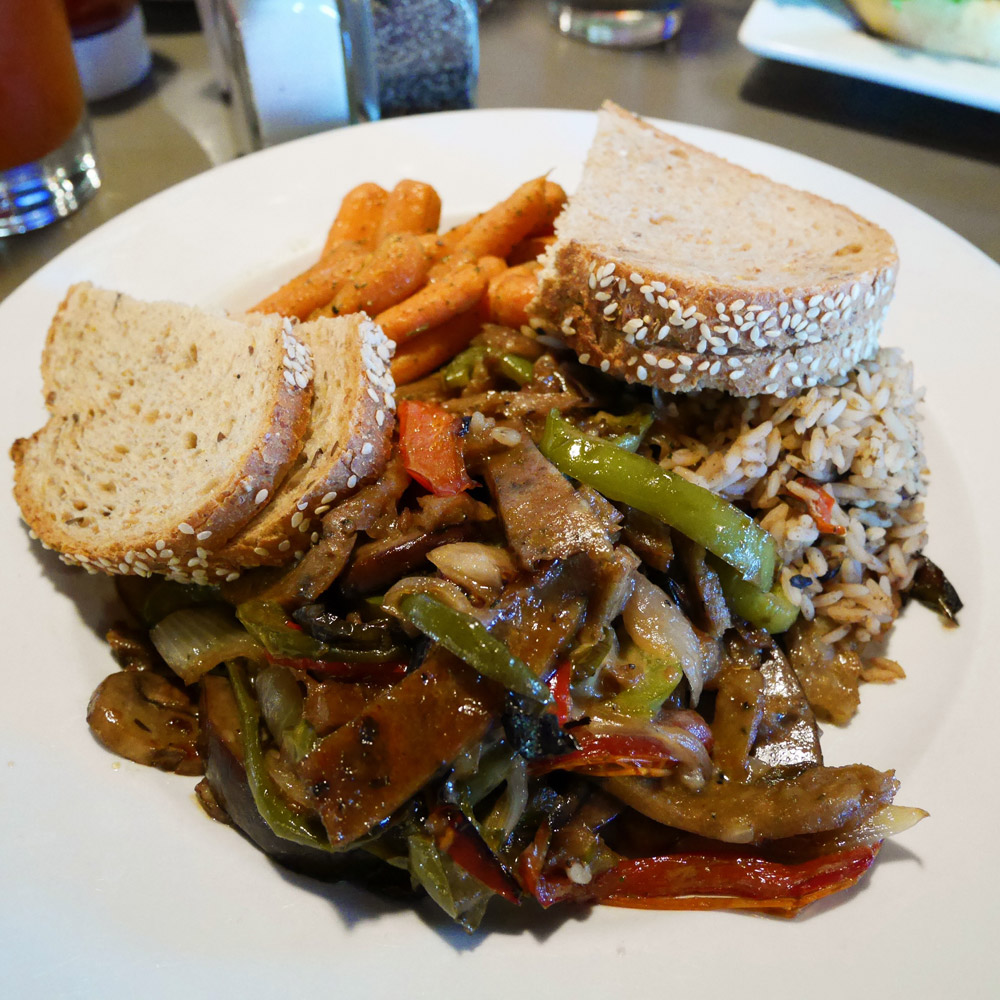 Apparently, Double Wide Grill’s meatless stroganoff was chosen as the best vegan dish of Pittsburgh a couple years back. I decided to give it a try. The seitan strips and gravy were tasty, but the portobello mushroom had a very tart marinade that didn’t quite do it for me. Wish this came with pasta instead of rice and bread. Overall, an okay dish in my books. 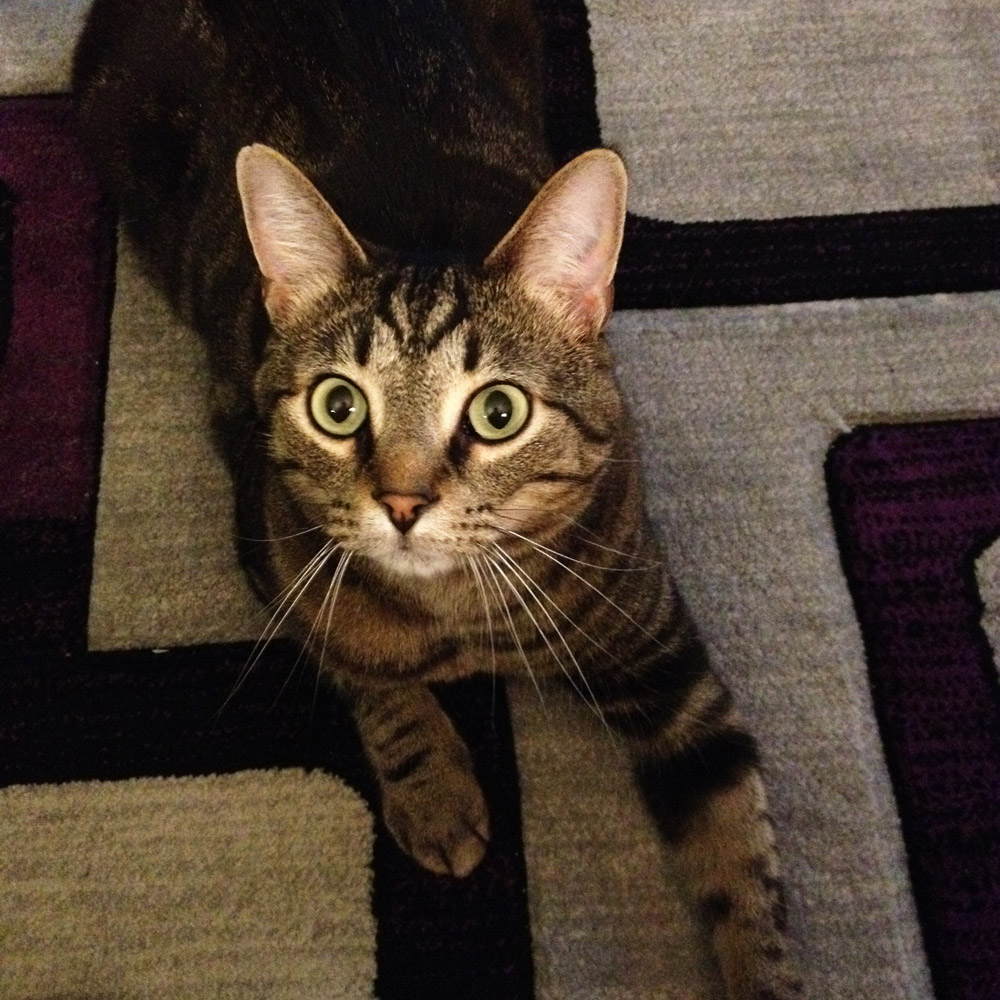 I stayed at Liz and Dan’s house that evening. They have two cats: Snuffy and Goomba. The kitties were shy and curious, but eventually warmed up to me. I am the cat whisperer after all. Isn’t Goomba a pretty lady? She’s named after the mushrooms from Mario. 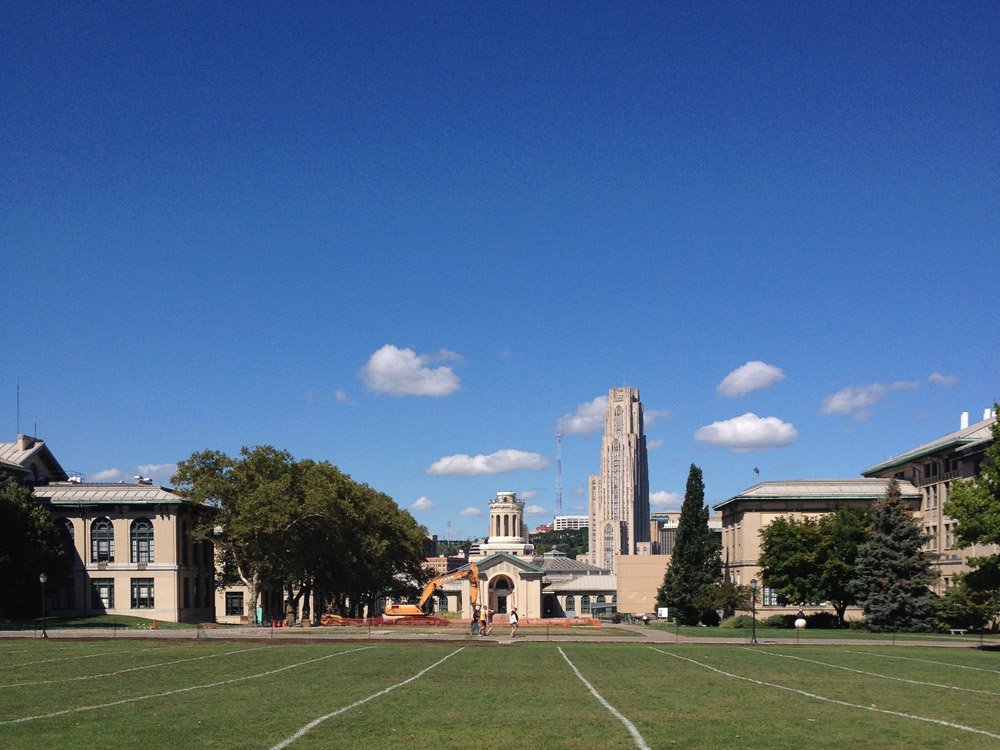 The next day, I visited Carnegie Mellon for a quick stroll. Even though I visited Pittsburgh a couple years ago, this is my first time back on campus since graduating. I saw a kid wearing a “Class of 2020+” t-shirt, and boy, did that make me feel old. (The “+” means he’s an architecture major like I was. That’s how you spot fellow archis.) 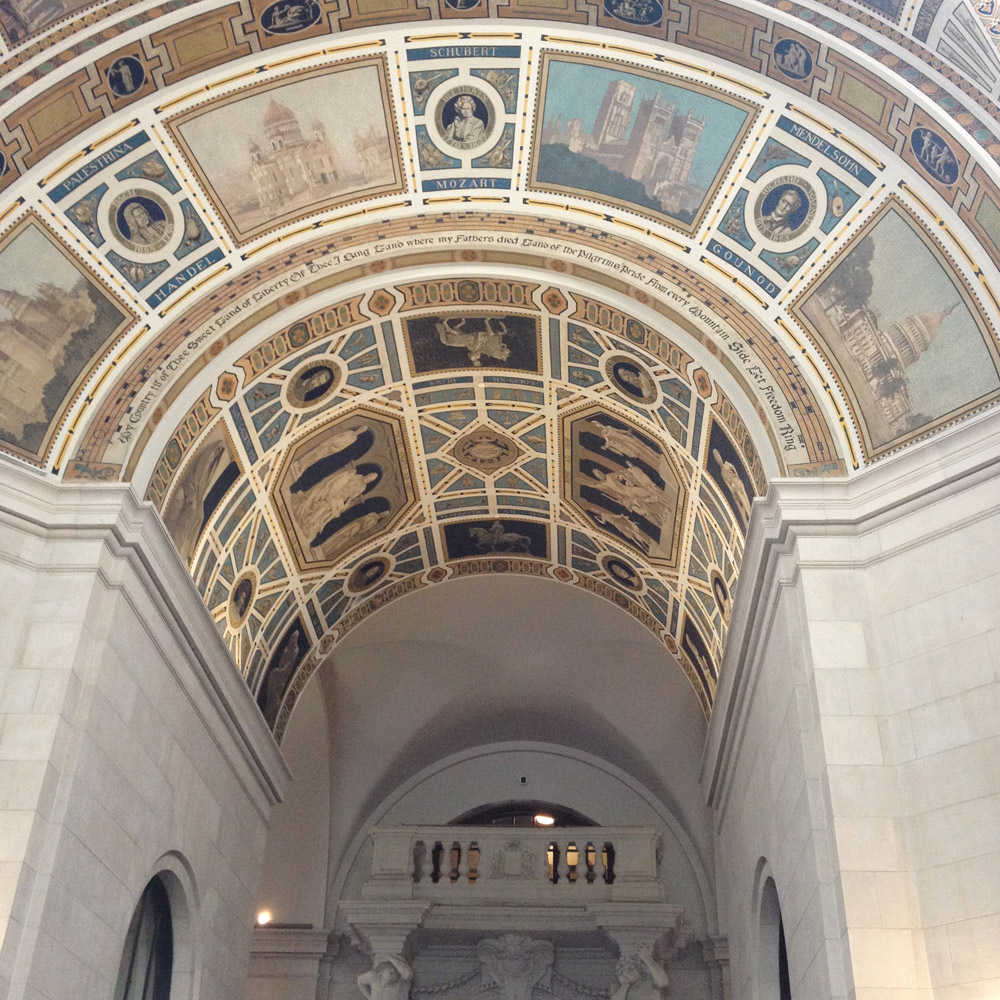 I also stopped inside the College of Fine Arts and the ceiling mural was just as I remembered. How are you, old friend? Fun fact: I once did a semester long project on this mural and the works featured in it. We have a love/hate relationship. 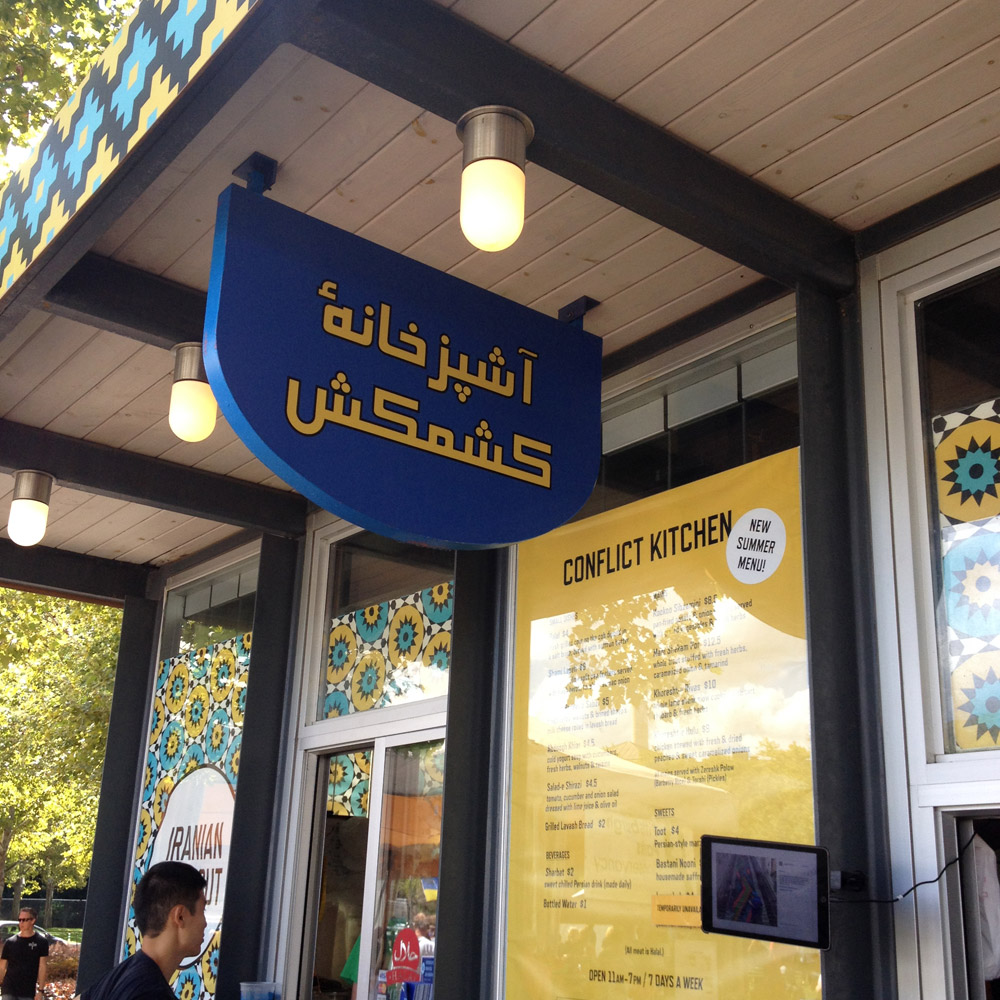 I visited my old stomping grounds in Oakland and made a pitstop at Conflict Kitchen for lunch. This little food stand features food from countries that the U.S. is in conflict with, and their goal is to raise awareness of and generate discussion about those countries and cultures. What better way than to start the conversation with food? 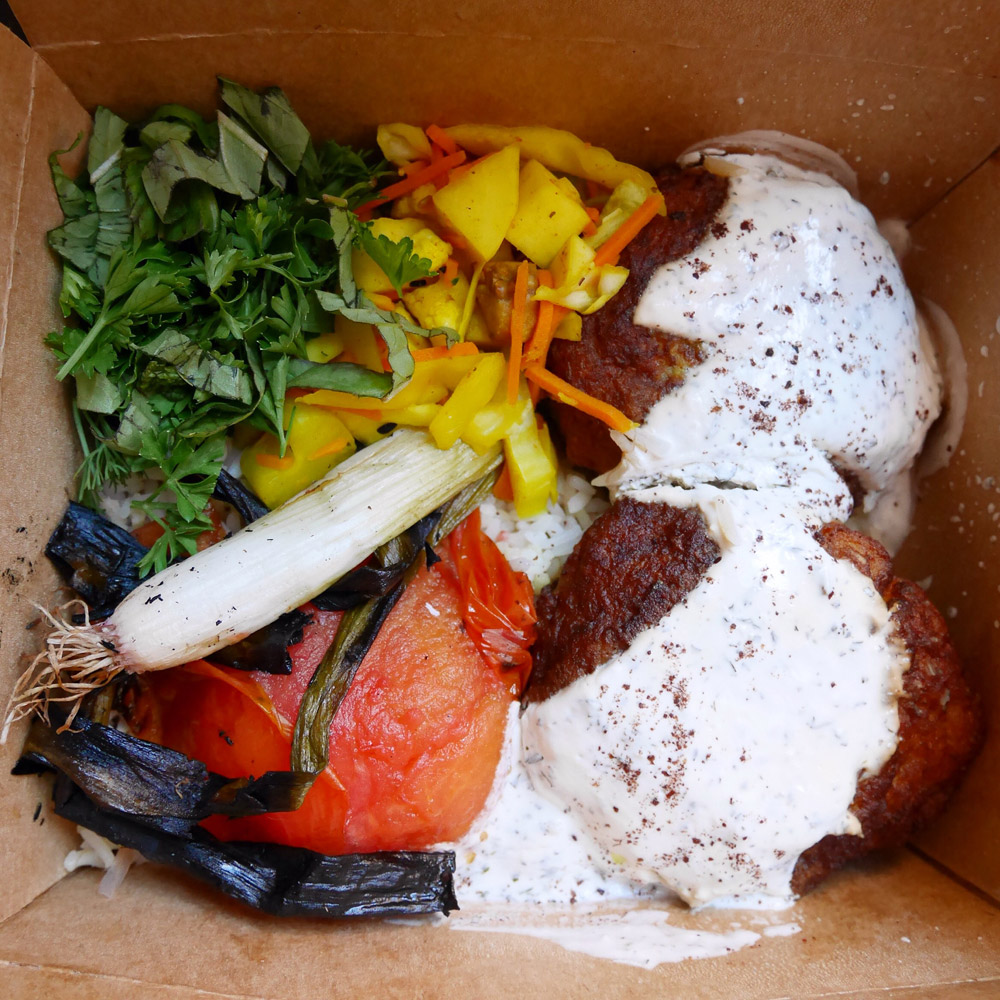 Conflict Kitchen is currently focusing on Iran. This was my first time having Iranian cuisine, so I can’t tell you much about it except that it is real tasty. I had the kookoo sibzamini pan fried potato and onion patties topped with a yogurt sauce. It’s served with torshi makhloot pickled veggies, grilled tomato and onion. The patties had such a smooth, satisfying texture! 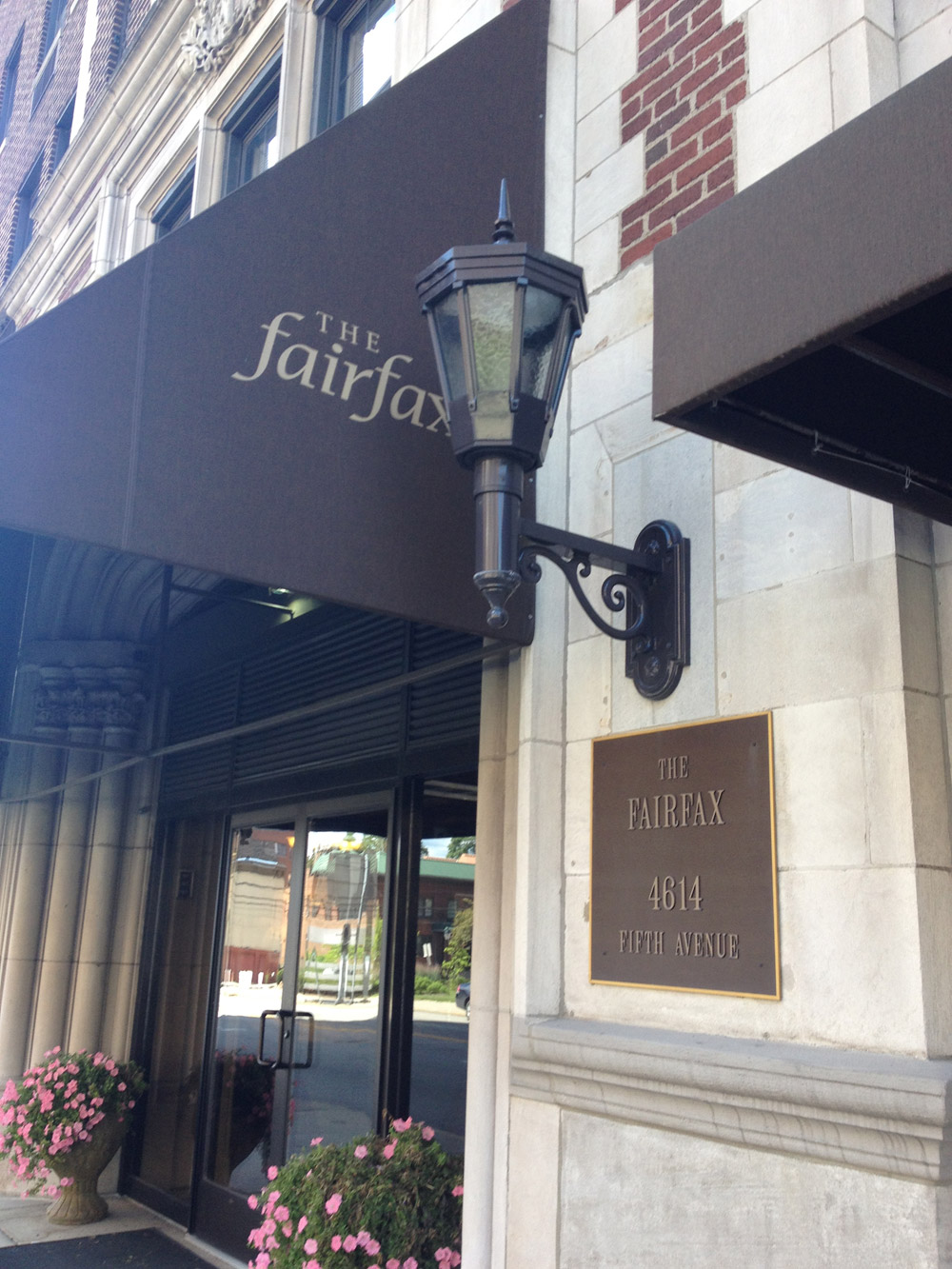 Since I was in the neighborhood, I walked over to my old apartment The Fairfax for old time’s sake and caught a Lyft from there. My original plan was to change into wedding appropriate attire in a campus restroom (hah!) and go straight to the ceremony from there, but I was so sweaty (damn you, east coast humidity) that I decided to check in at the hotel and take my second shower of the day.

The wedding reception was at The Priory Hotel over on the North Shore. It’s such a charming historic hotel, and I foolishly only snapped this one photo of the exterior. Cocktail hour was in this lovely courtyard, then we moved inside to eat, drink, and dance the night away. Here’s our gorgeous bride, Christina, on the dance floor! 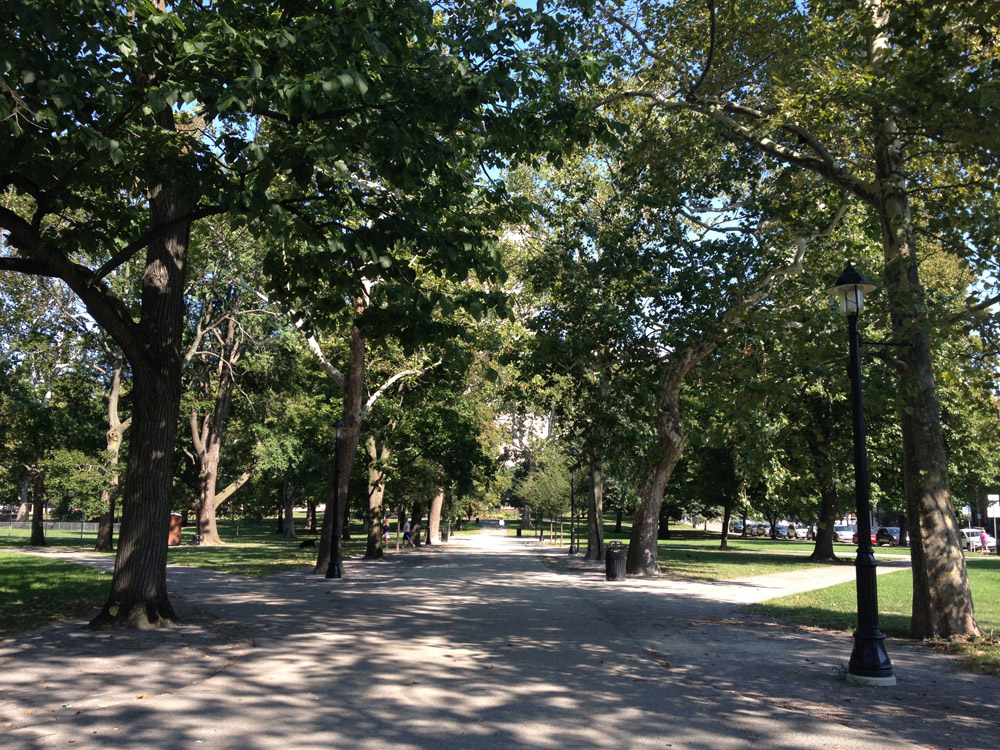 I had the morning to myself and walked through Allegeny Commons Park before it was time to brunch with Zach and Cathy. We visited B52 Cafe in Lawrenceville for an all vegan, all delicious brunch. Hurray, I can eat everything on the menu! Everything we tried at B52 was great, and I always enjoy having a good vegan meal with non-vegan friends. #veganize 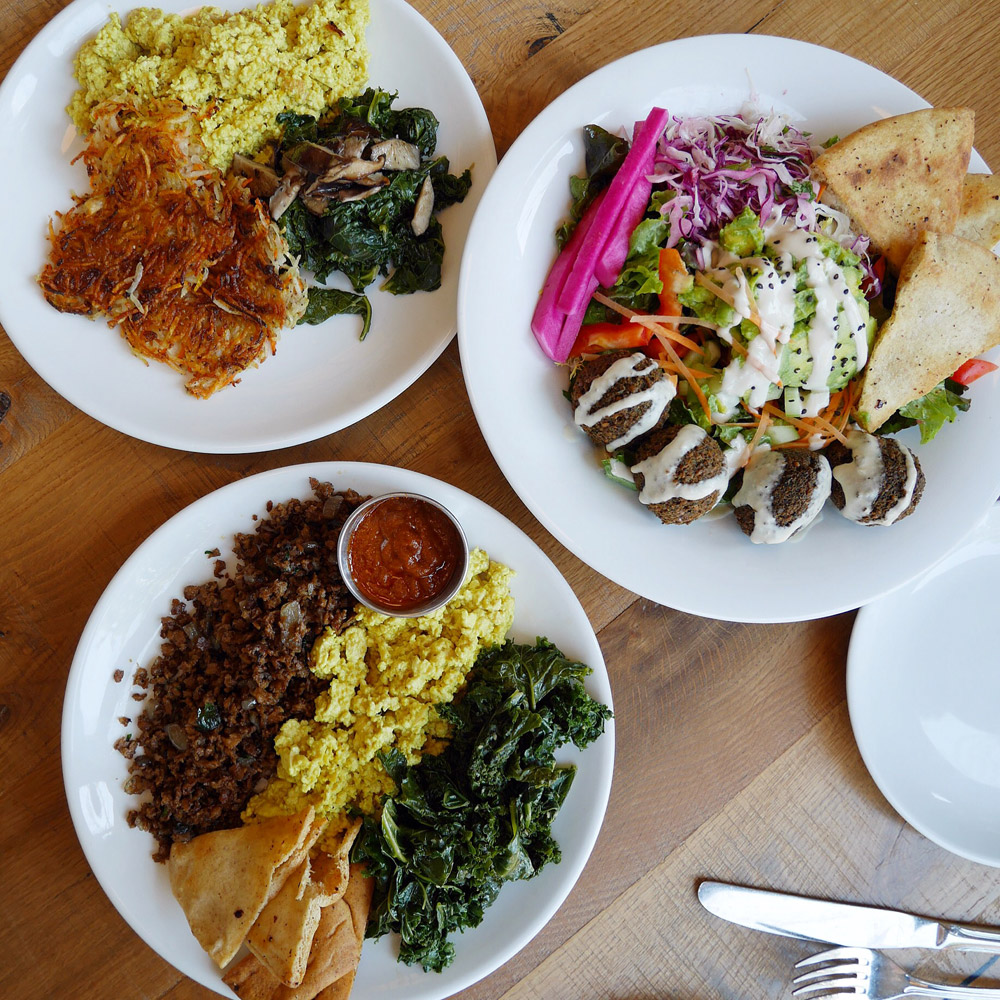 The falafel salad was real pretty on the plate, and we took our server’s suggestion and added avocado. Turns out that was a very wise choice. The falafel had a great texture and the slaw was enjoyable. I don’t normally get excited about pita chips, but these were particularly tasty. 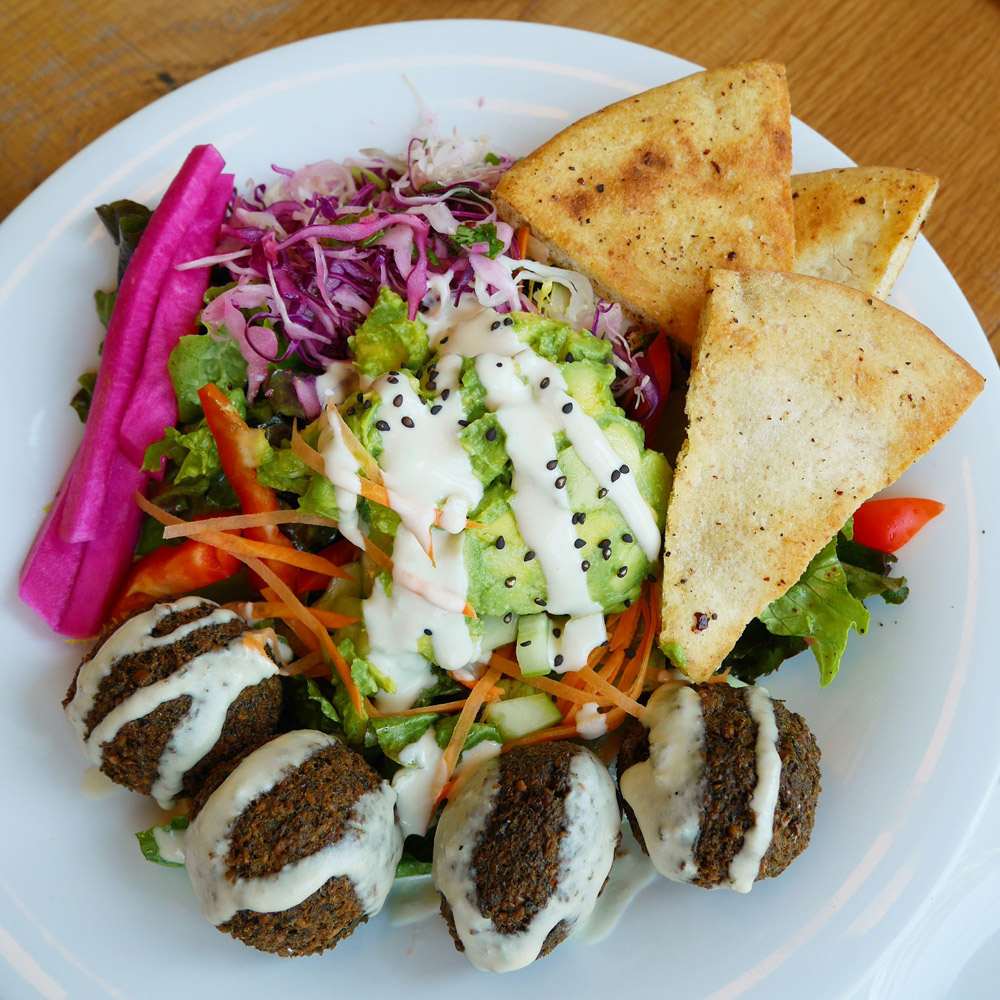 At B52, you can get a standard tofu scramble, which comes with potato latkes, greens, and shiitake mushrooms. Or you can get the kofta tofu scramble that has very yummy spicy seitan kofta, more of those great pita chips, and a delicious harissa smoked pepper hot sauce. Oh, that sauce! This plate is definitely the way to go… 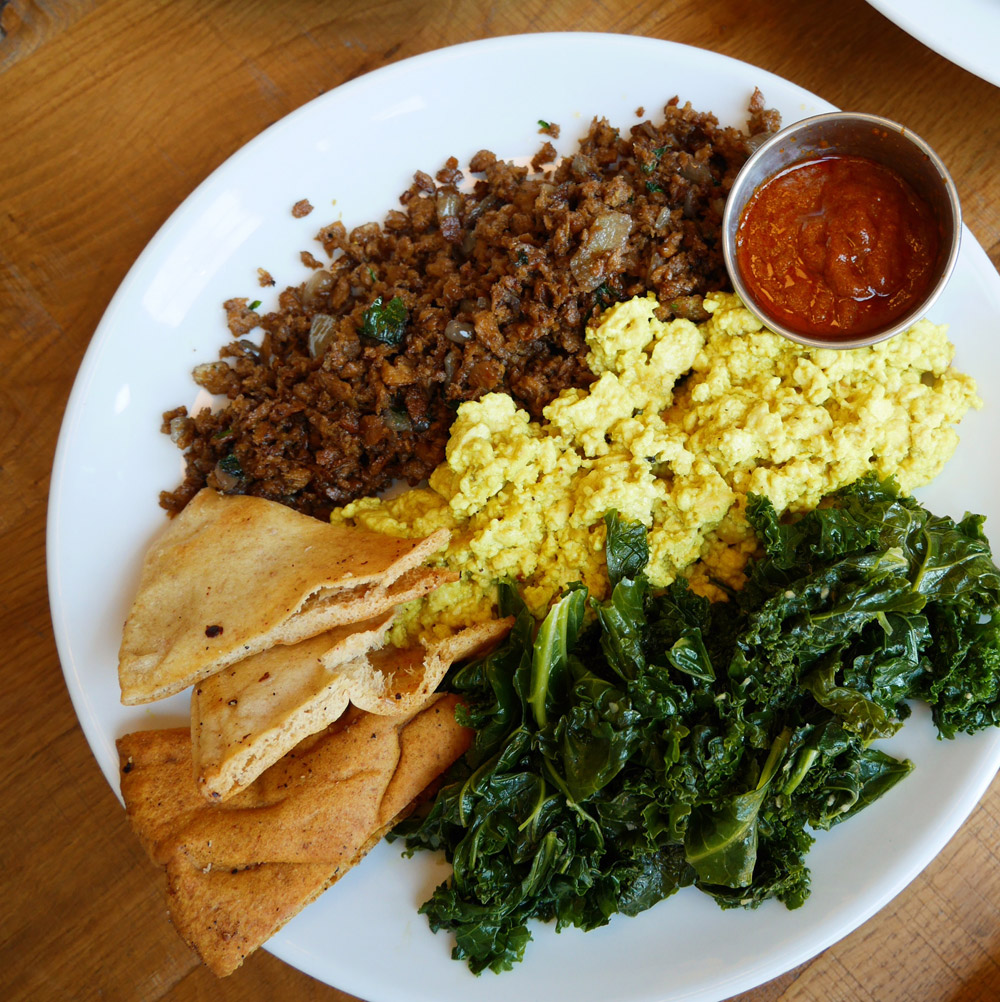 After brunch, Zach drove me to the airport (my friends are seriously the best!), and I got to hang out briefly with his very handsome dog Søren, whom I haven’t seen since he was a puppy. What a dog, what a mane! 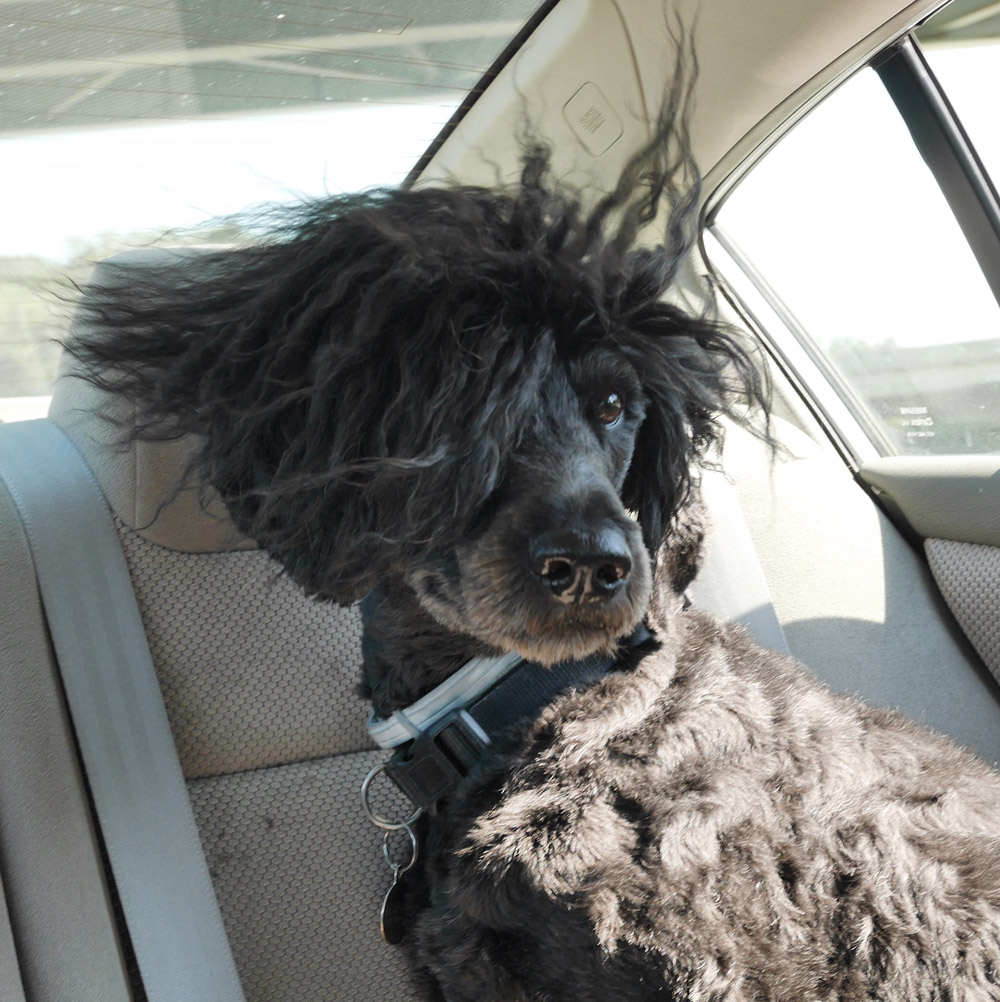 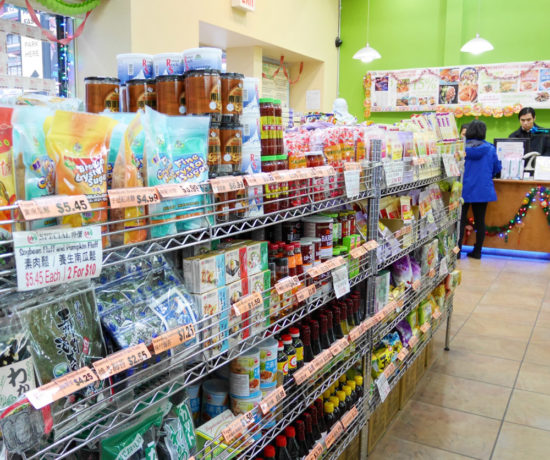 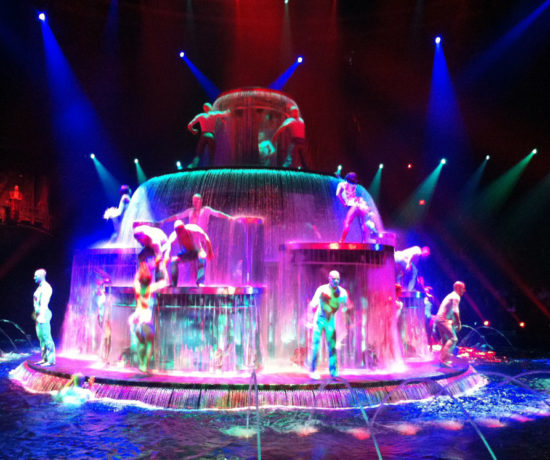 Le Reve at The Wynn, Vegas 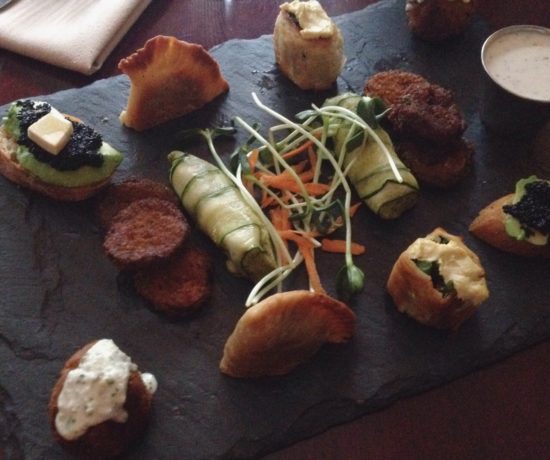