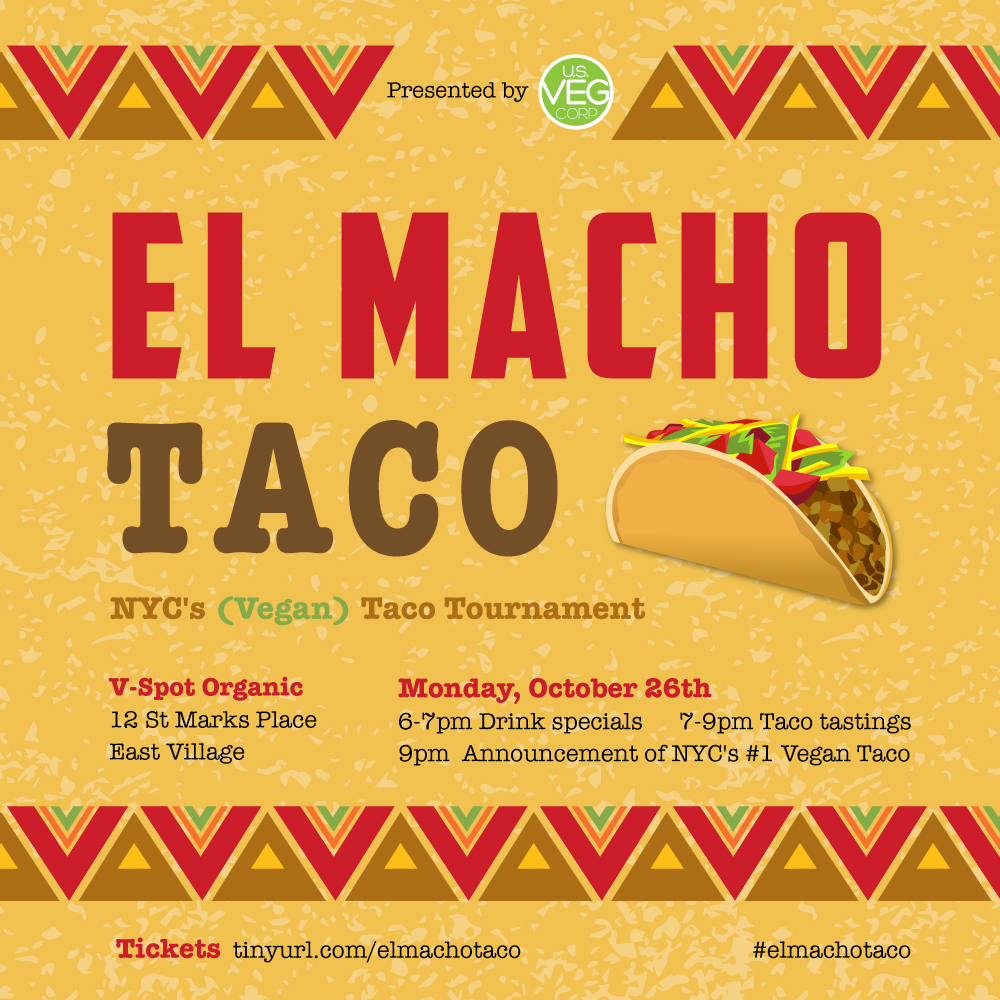 A couple weeks ago, I attended U.S. Veg Corp’s second vegan tasting event. This time, it was all about plant-based tacos from some of NYC’s best vegan and Latin spots. El Macho Taco was structured differently from the last event, which allowed us to interact with the chefs and watch them assemble the tacos right on the spot. It was vegan taco heaven!

First up was Taco Chulo with shiitake mushrooms and lots of avocado. Bright and zesty with a good spicy kick. Next was Jungle Cafe’s colorful and eclectic creation. It was tasty, but more like a salad. For me, there was too much going on in there. 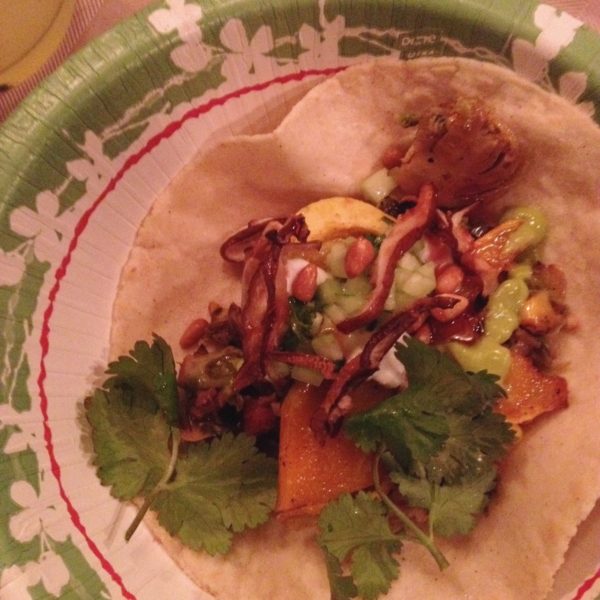 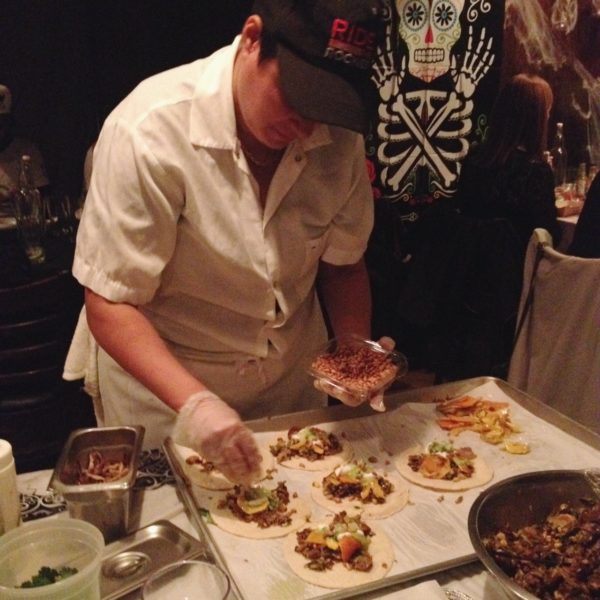 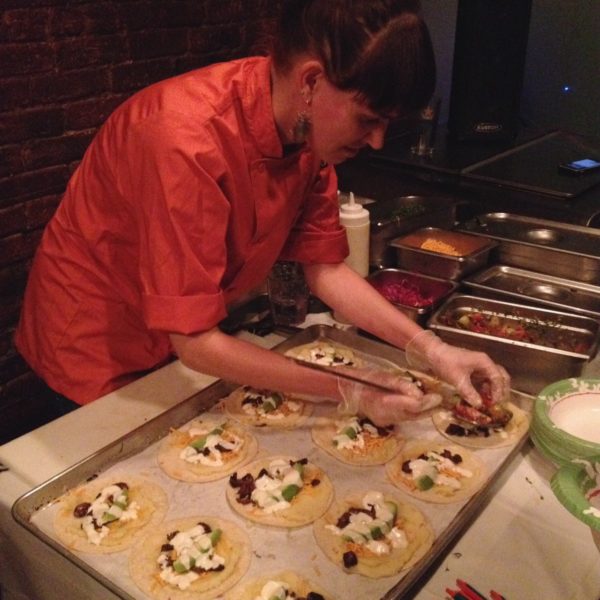 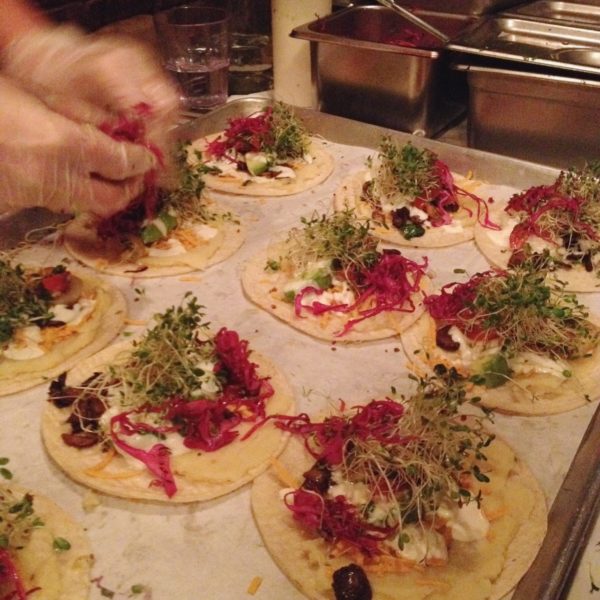 My third taco of the night was a pineapple inspired mini taco from Brooklyn Fork & Spoon. It was the perfect couple of bites, where every ingredient could be tasted together. I voted this one as my favorite of the night, and I would have liked to taste the others as amuse bouche mini bites like this one. That seems more like a true tasting. 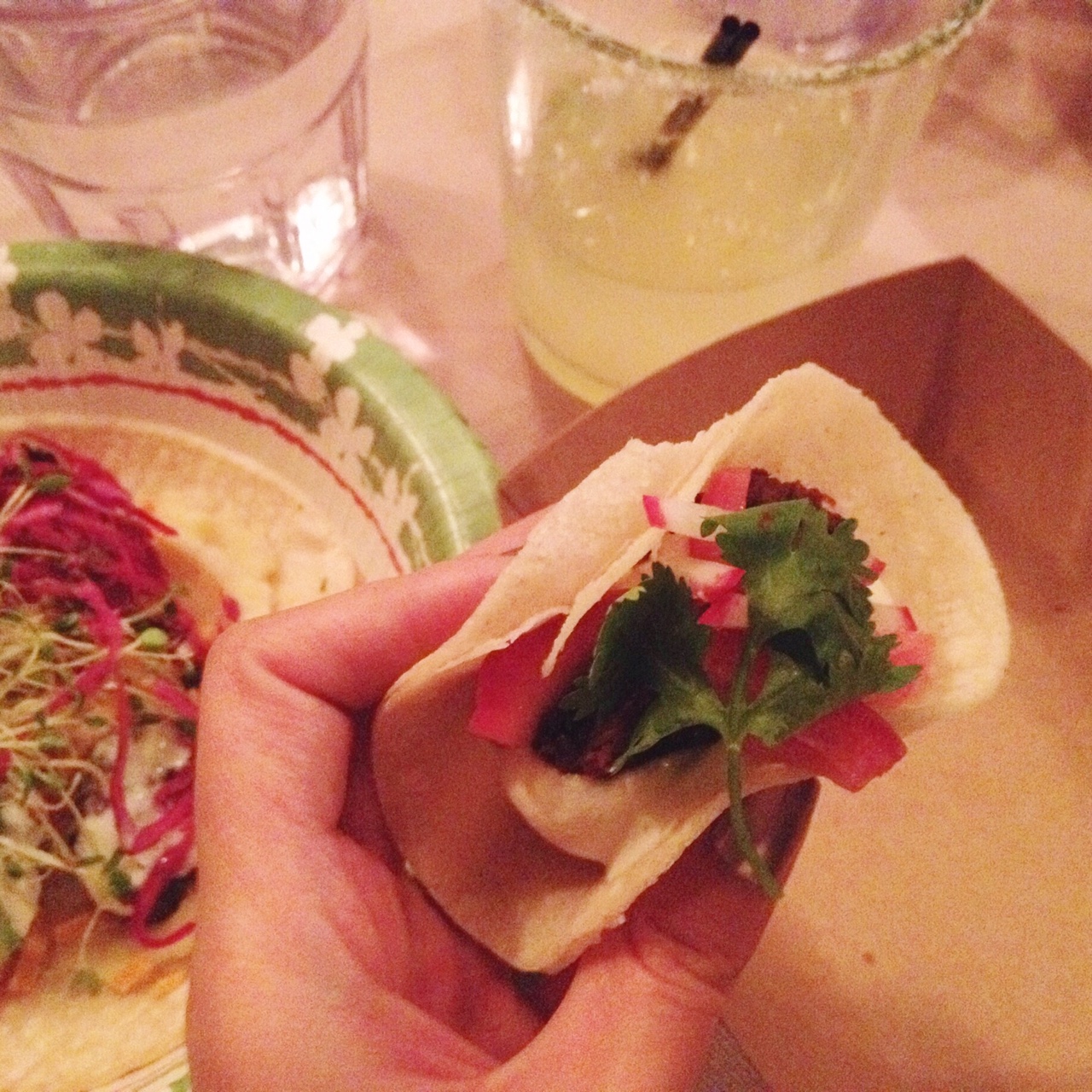 The Judges’ Choice and People’s choice taco was the result of great teamwork between Vegicano’s Rudy Ramos and Chris of Monk’s Meat. This was another one of my favorites of the night. Handmade seitan, mushrooms, salsa, avocado… a classic taco with a vegan twist. This green cilantro corn tortilla was the only handmade tortilla of the night. 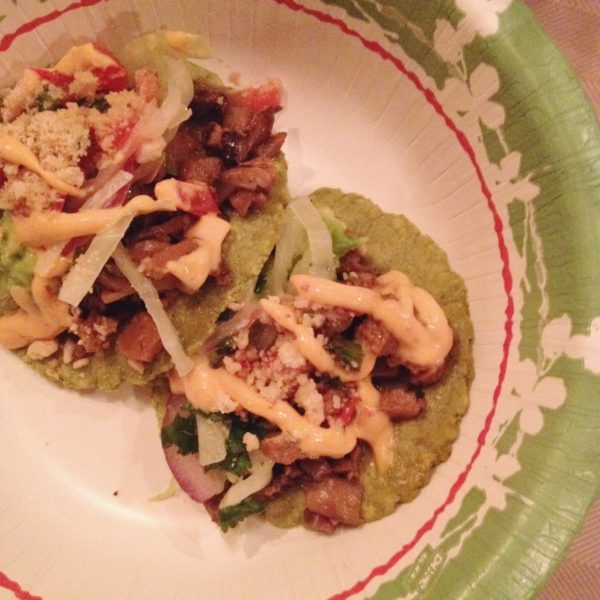 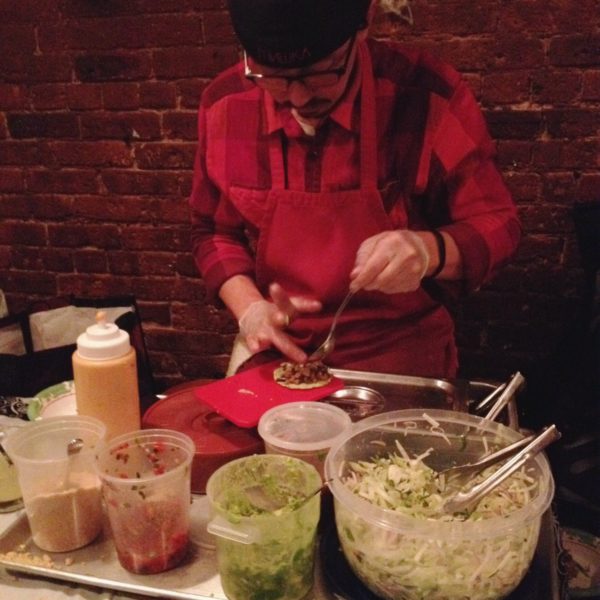 Another one of my favorites was Rockin Raw’s raw vegan creation. The RR team was so lively and fun to chat with. Their sauce game is always very strong, and they’re not afraid to combine flavors and mix things up. My only issue was that this raw vegan tortilla that kept getting stuck to my teeth. Here’s Kunal about to dig in to their taco… 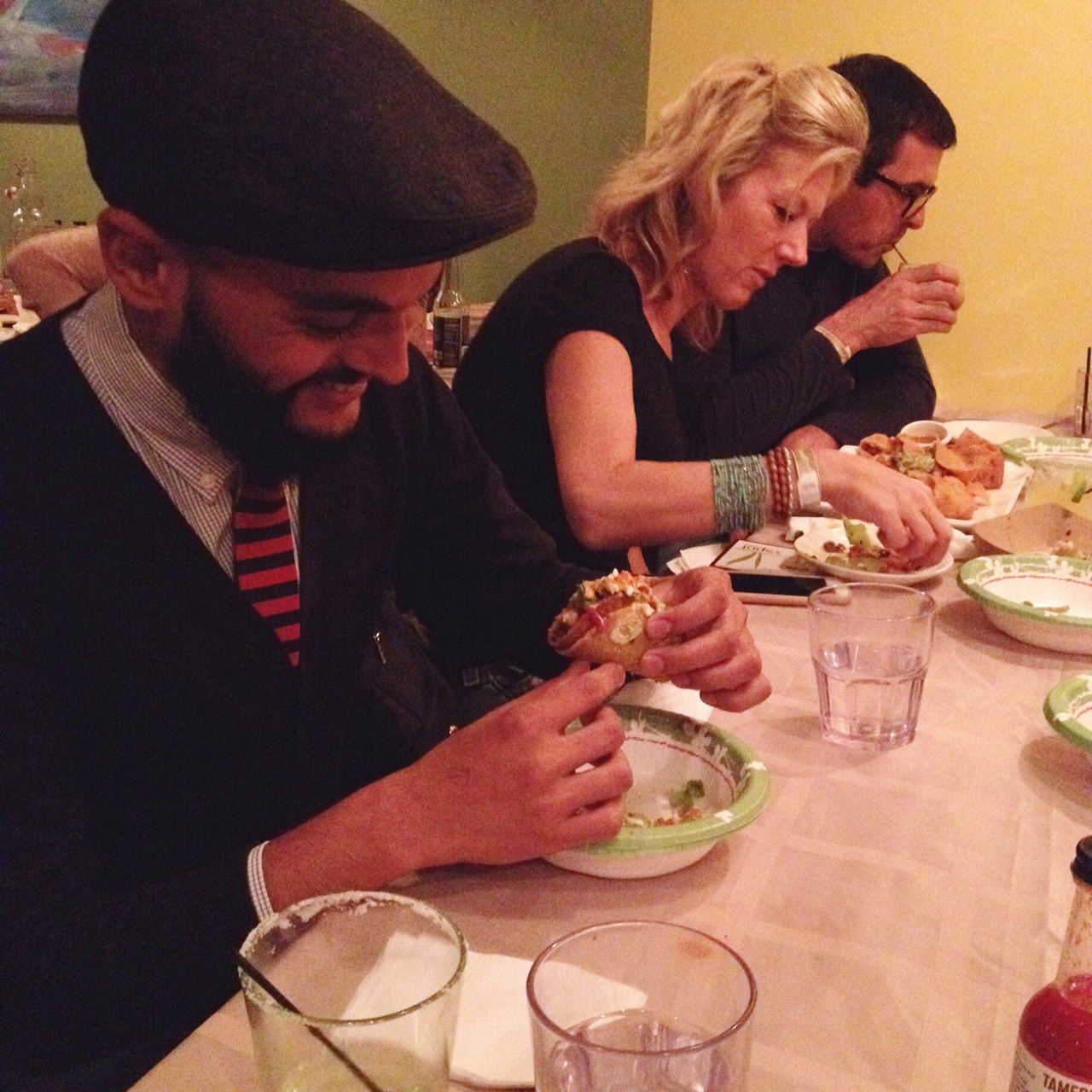 V-Spot, the host restaurant, also participated and presented a taco with a puffy crunchy shell. I’m not always crazy about hard shelled tacos, but this one had plenty of filling to complement the exterior. (I’m finally having dinner at V-Spot this Friday!)

The final taco of the night was Chef Pharaoh’s creation, which he called Masterpiece Taco. The soy-based vegan meat he created was juicy and packed with Caribbean flavors. Everything else, unfortunately, didn’t wow me. It turns out that Chef Pharaoh entered the contest at the last minute. If I had to make 100 vegan tacos in an hour, I would have a complete meltdown, so I’m definitely in awe that he pulled those tacos together in that time. 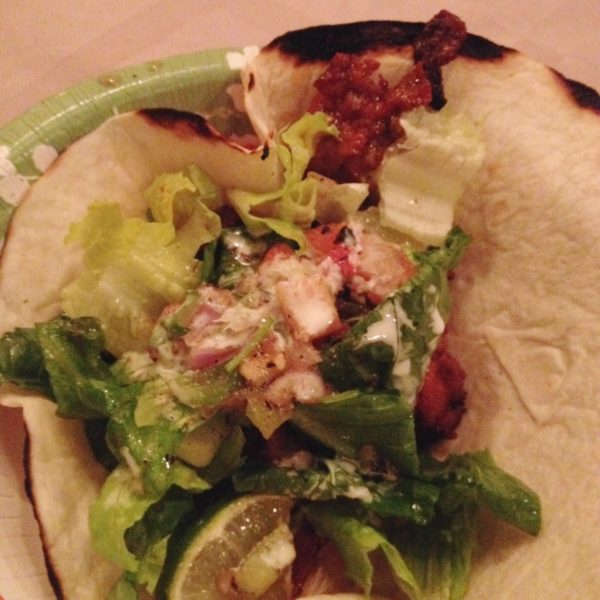 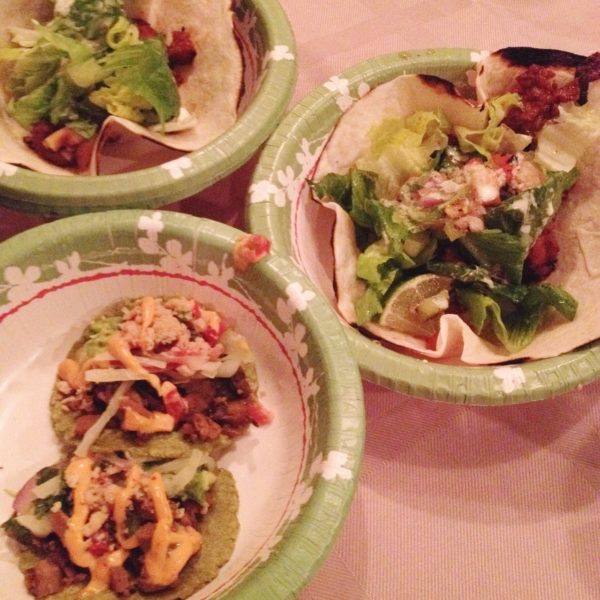 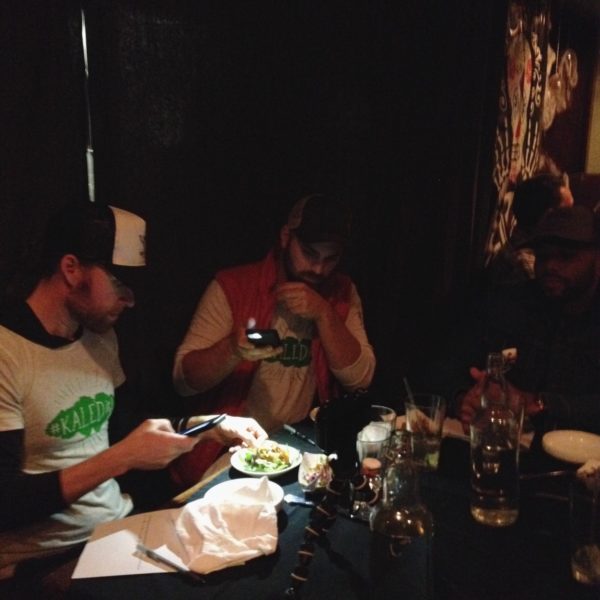 The guest judges at this event were The Vegan Zombie, The Vegan Roadie, and Crazies & Weirdos. I was pretty amused that they showed up not only with matching “Kaled It” t-shirts, but also similar trucker hats. Hah!

Least, but not least, here’s the highlight reel from El Macho Taco. At 1:00, you’ll catch Kunal chowing down Rockin Raw’s taco and nodding away with every bite. Just after 2:00, I caught a glimpse of someone with a necklace that looks like mine… no wait, that’s me!

Note: This post is in collaboration with U.S. Veg Corp. I was invited as a guest and member of the U.S. Veg Corp team to this event and received a complimentary meal. This was not in exchange for a positive review and all opinions expressed here are my own. 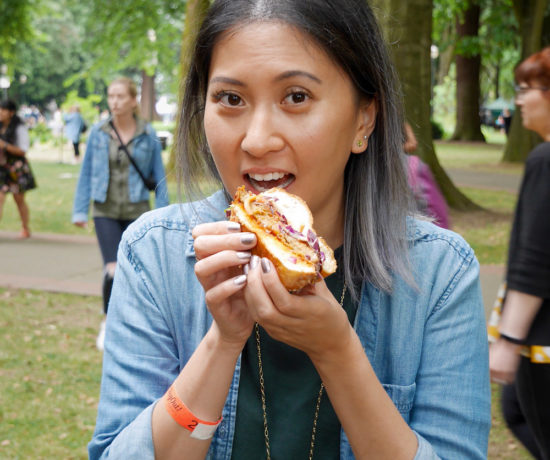 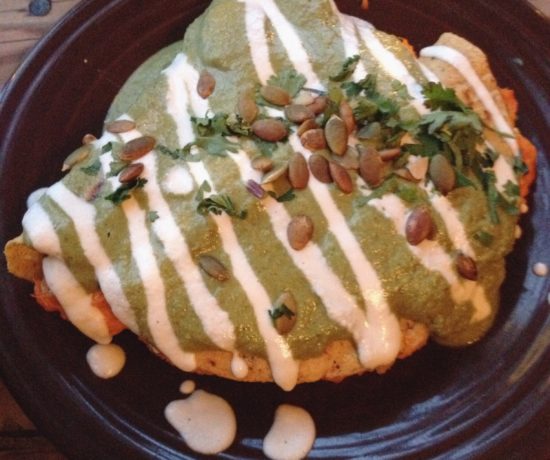 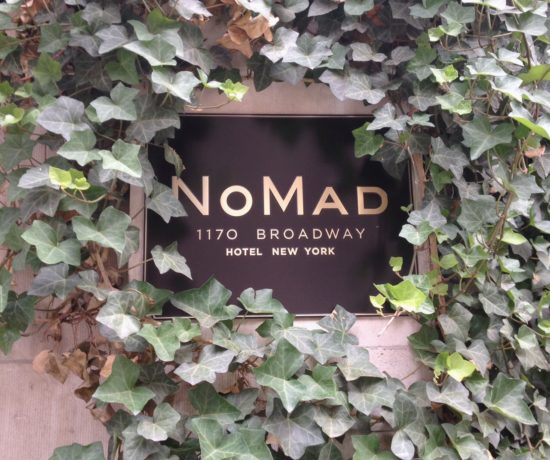