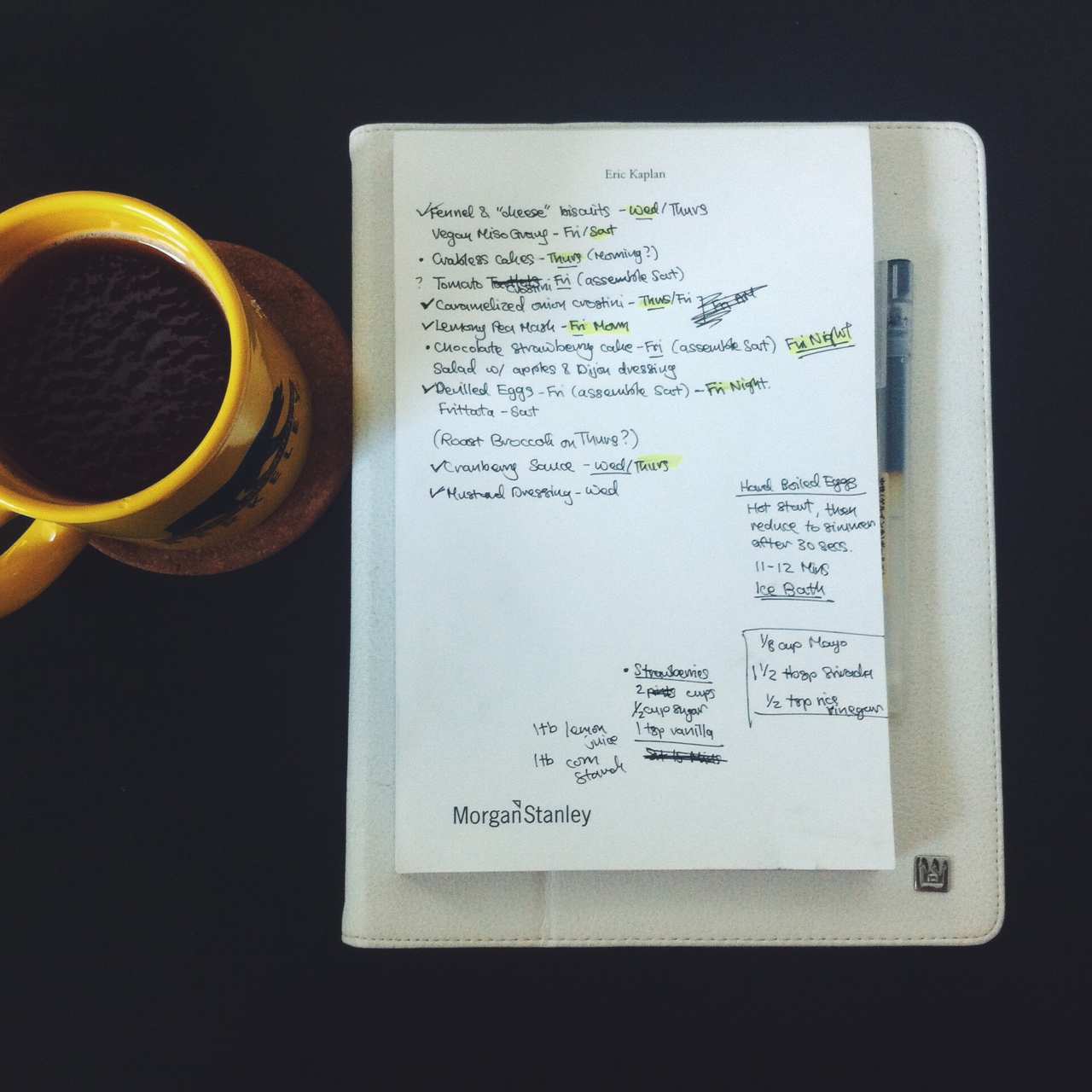 I can’t believe Thanksgiving is tomorrow! The past few weeks have zoomed by, and I’m looking forward to doing absolutely nothing for the next few days. We’re not doing a big Thanksgiving feast this year since we just had friends over for brunch on Saturday. All of these food photos are actually from brunch 2.0 when we happily nibbled away on all the leftovers the next day. I was too busy tending to the kitchen on the day of.

The menu was pretty big (for 15 people) and brunch lasted for over 6 hours! Most of the recipes were very easy and could be prepared in advance. A few of the dishes, like the cranberry sauce, are tried and true recipes that I make year after year. 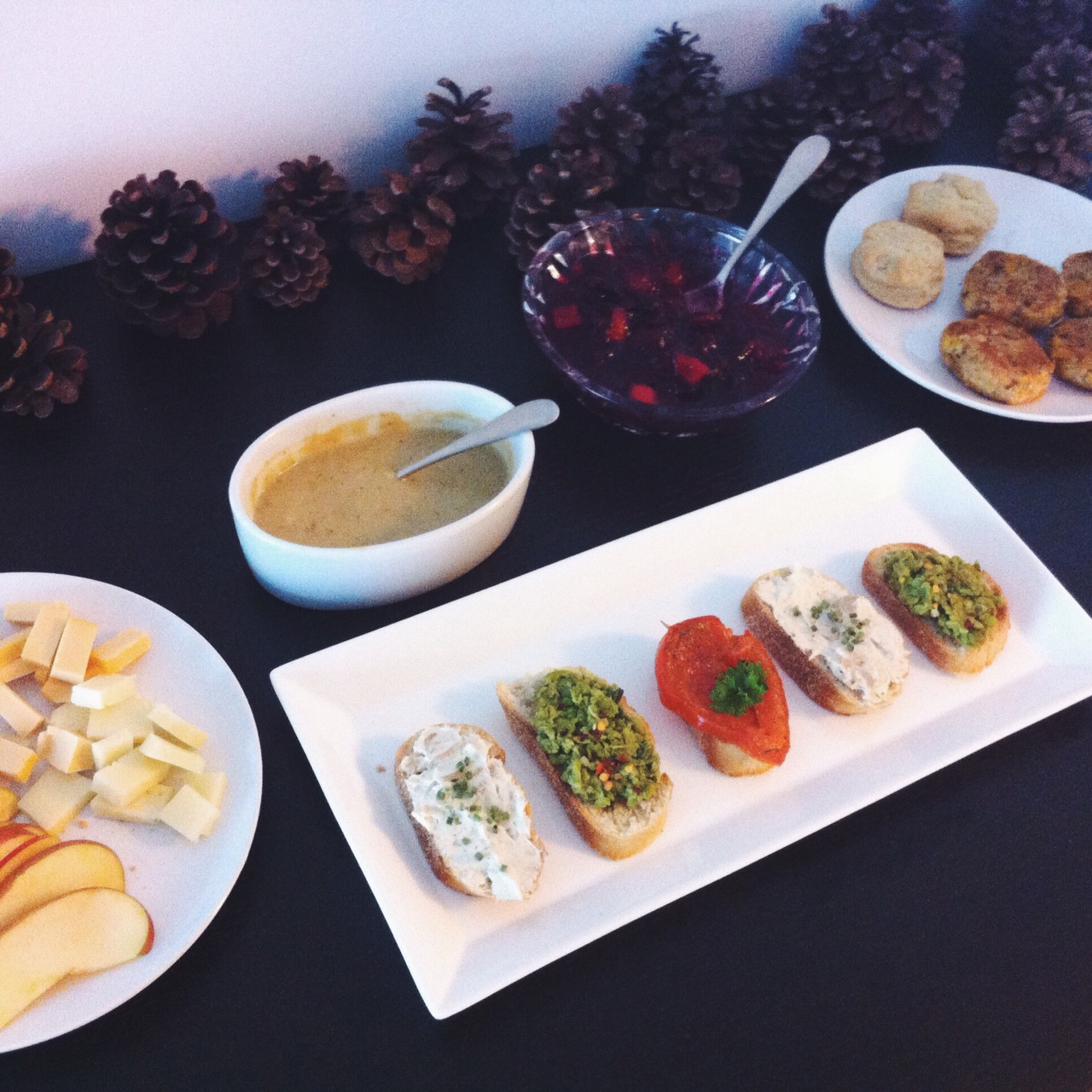 We told all our friends we would be serving vegetarian brunch foods, but they were welcome to BYOM (bring your own meat)! McKinney was the only one who took us up on the offer and brought a package of bacon. This is the first time bacon has been cooked in our kitchen… man, the smell of bacon really lingers! Haha.

We plated the crostinis and deviled eggs before people started arriving. There were 3 types of crostini: lemon pea toast, caramelized onion cream cheese, roasted tomatoes. Half inch thick slices of bread, lightly toasted, makes for the perfect base. We assembled them at the very last minute so the bread wouldn’t get soggy. 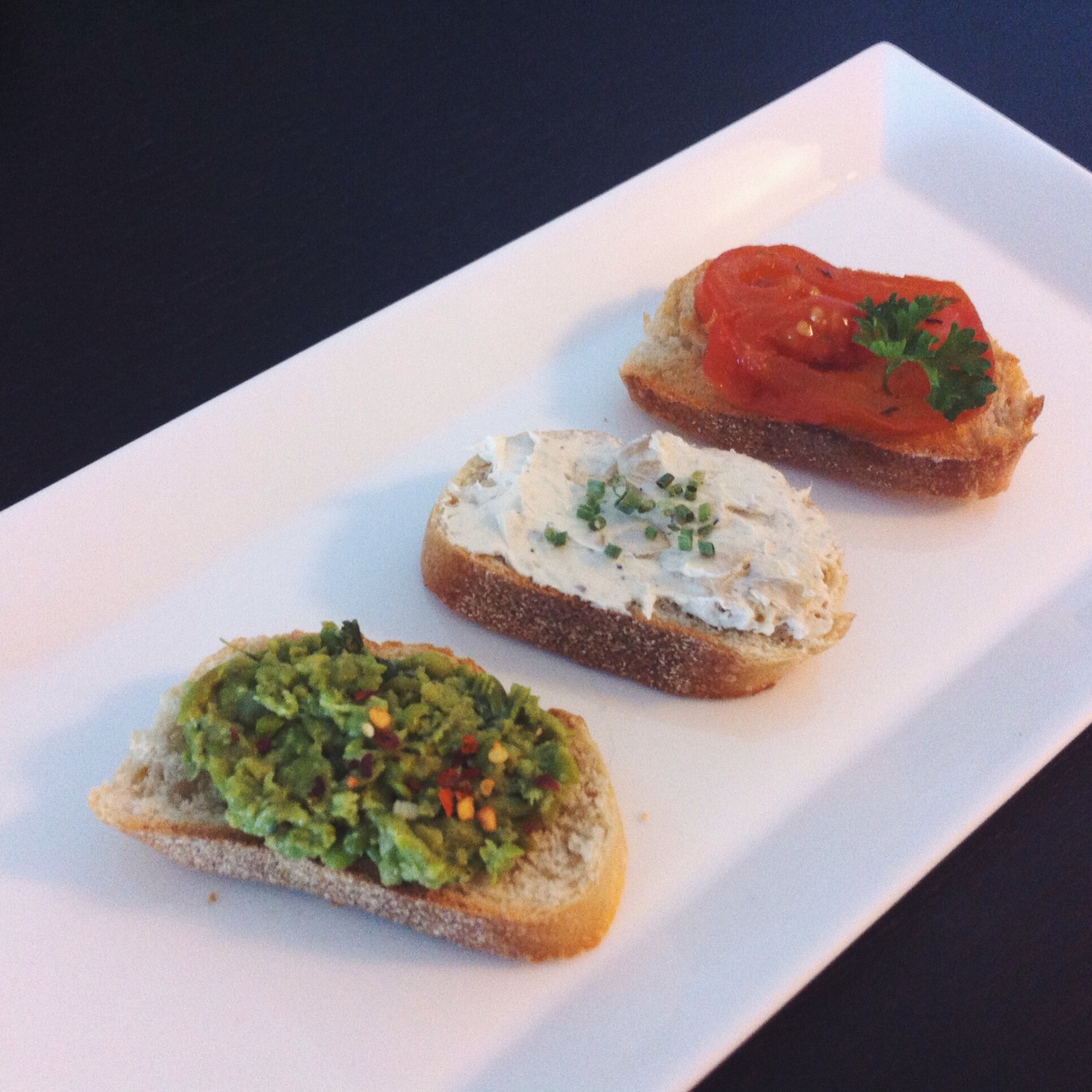 This batch of biscuits were completely vegan, and I added some fennel and a dash of nutritional yeast for added flavor. I’ve finally found a vegan gravy recipe that does not have mushrooms! The secret to that gravy recipe is the miso paste. 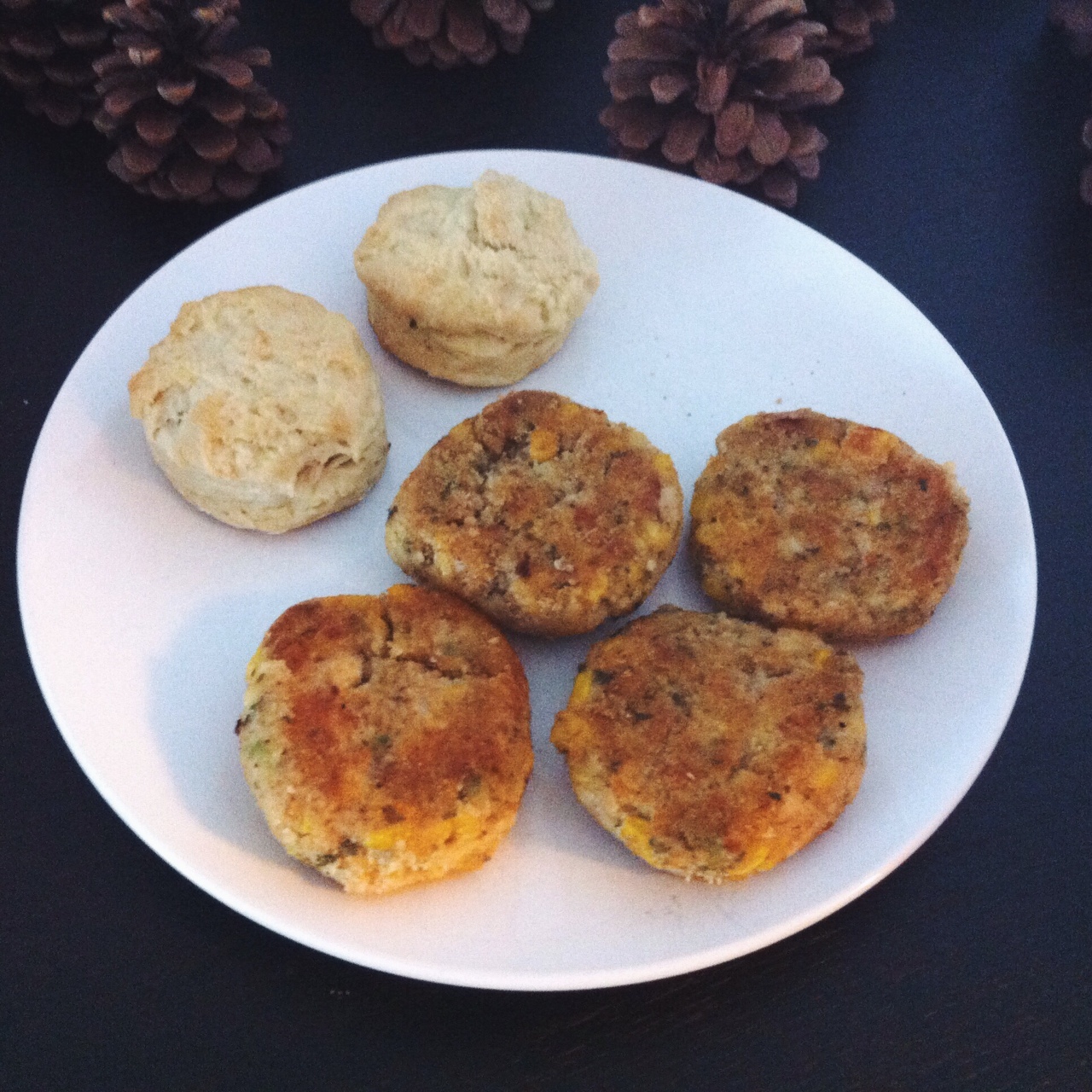 I also took this opportunity to make crabless cakes again. They went very well with sparkling wine and a salad of leafy greens and apples topped with a homemade lemon mustard dressing. JS brought squash fritters that were fried in advance and just needed to be reheated in the oven. I really need to experiment with baking the crabless cakes instead of frying them… that would have made things a lot easier.

And of course, there was cake! In addition to the amazing coffee cake that Stephanie and Evgeny brought, I baked a vegan chocolate cake. This is the recipe I used, but instead of 2 eggs, I added 1/2 cup apple sauce and 2 tsp baking powder. This substitution resulted in more level layers, which saved me the hassle of trimming the layers before assembly. I also used hot coffee instead of boiling water like I do with all my chocolate cakes. 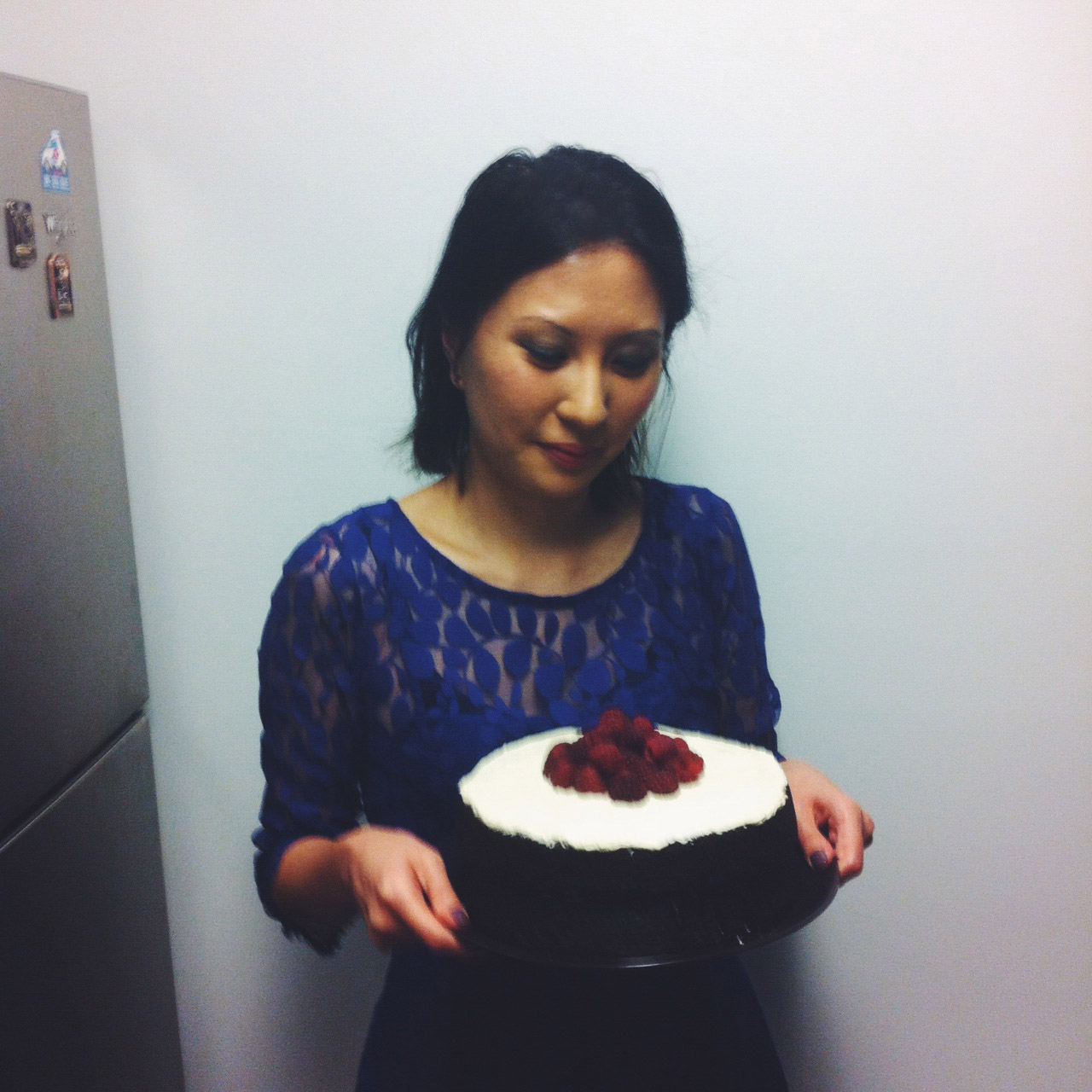 I used my easy vanilla frosting recipe and a stupid simple berry filling that I basically made up as I went along (1 cup berries, 1/2 cup sugar, 1 tsp vanilla extract, 1 tbsp lemon juice, 1 tbsp arrowroot powder, cooked until thick). The chocolate cake was moist and gooey, and I love how the berry filling seeps into the layers.

P.S. Please excuse my messy hair! I was so focused on cooking that day that I styled my hair in a rush. I did manage to throw on a pretty party dress though! 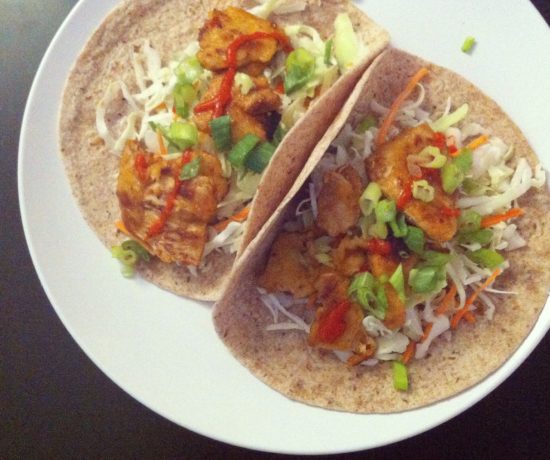 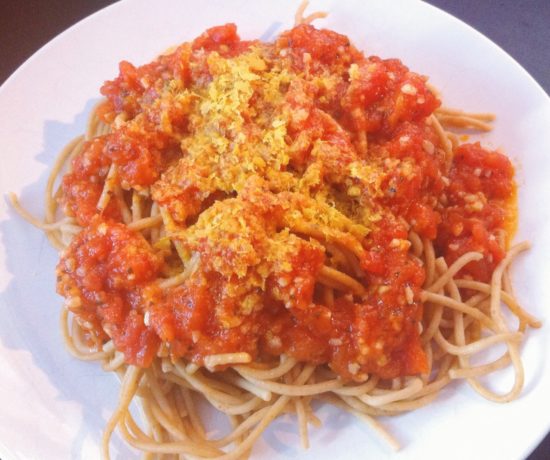 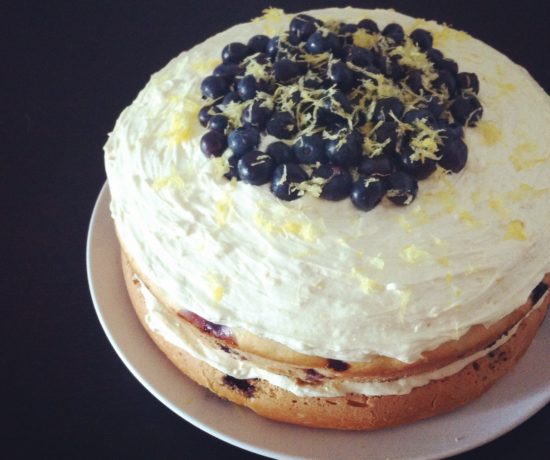