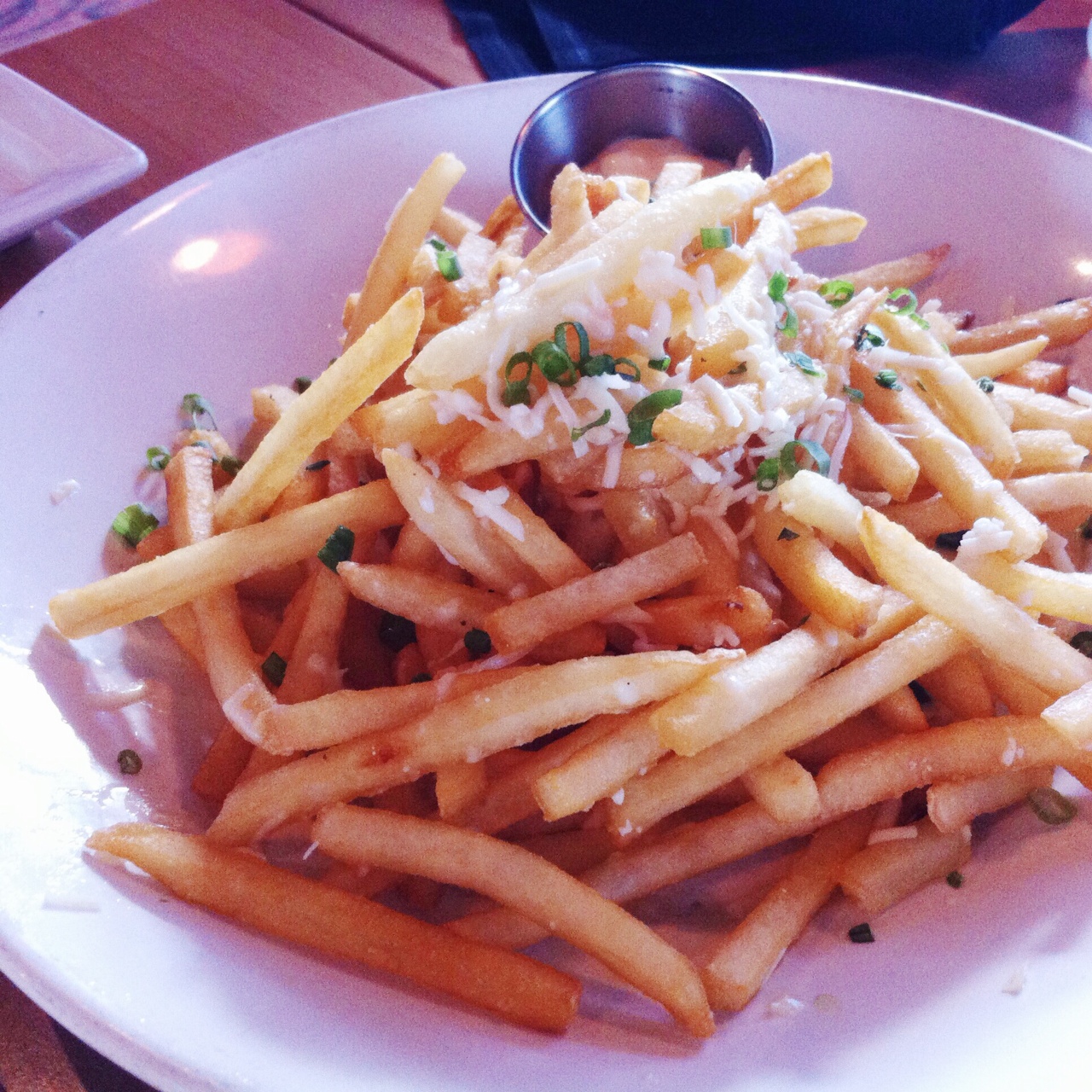 After an afternoon of mini golf on our first day in Madison, we were relieved to settle down for an early dinner at Bonfyre Grille. The exterior was kind of blah, while the interior was quite nice. Think classic American grill house with lots of wood grilled dishes.

Our table of nine shared two appetizers, which was plenty of food to go around. You can’t go wrong with truffle fries ($8)! Crispy shoestring fries topped with asiago and truffle oil. There’s aioli for dipping, but you really don’t need it. The fries were nicely seasoned, and the truffle oil was flavorful, but not overwhelming. It’s basically a party in your mouth! 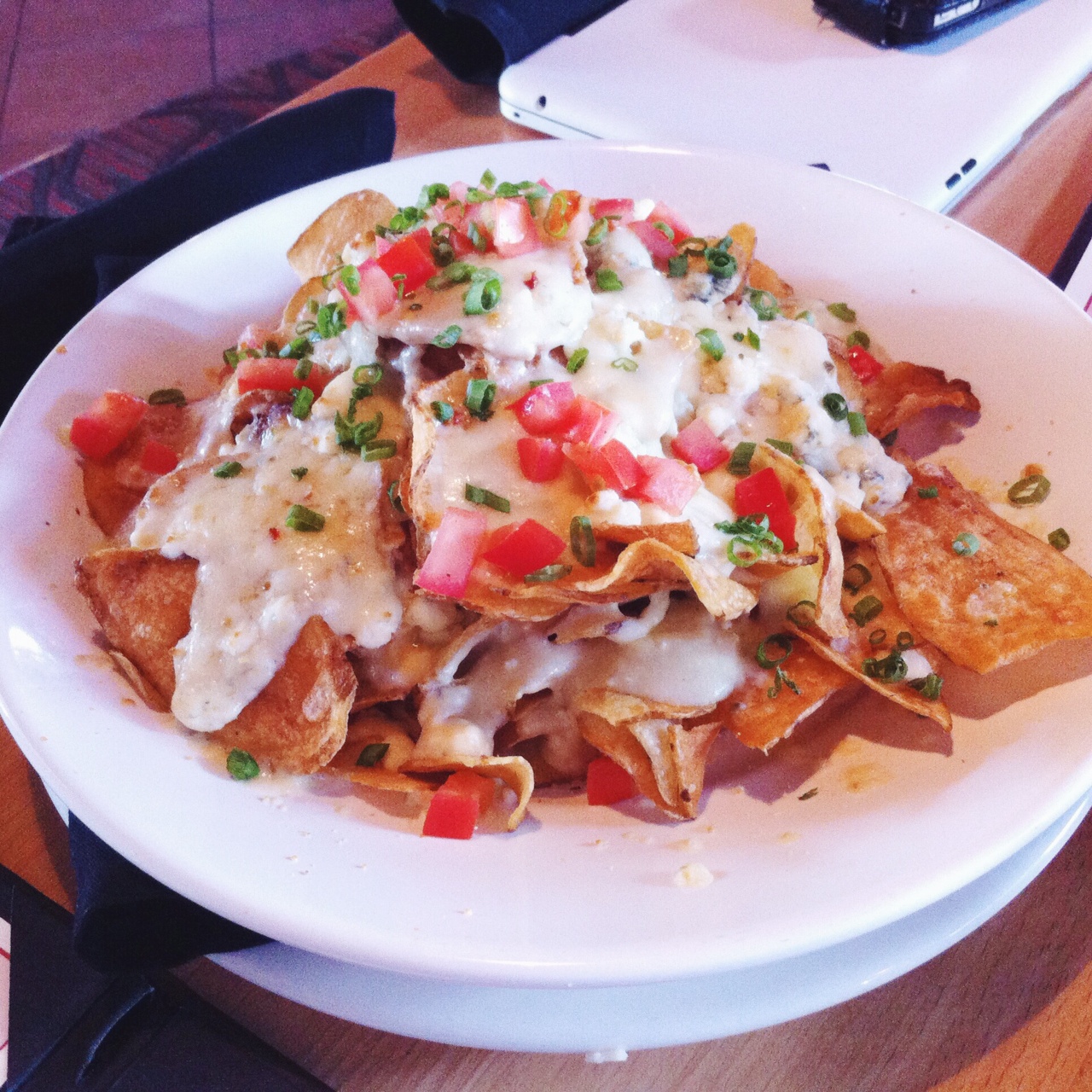 Our other appetizer was the maytag bleu potato chips ($9). Potato chips topped with maytag bleu, pepperjack, tomatoes and scallions. I’m not sure how I feel about the combination of blue cheese and pepperjack… seemed mismatched, but then again, I’m not the biggest fan of blue cheese. The chips were tasty though. Too bad most of it was drowned in cheese. You just need a teensy bit of cheese as it’s really rich.

John and I shared a side of the grilled caesar salad. The dressing was a bit much for me, and I should have asked for it on the side. However, the grilled romaine was good. 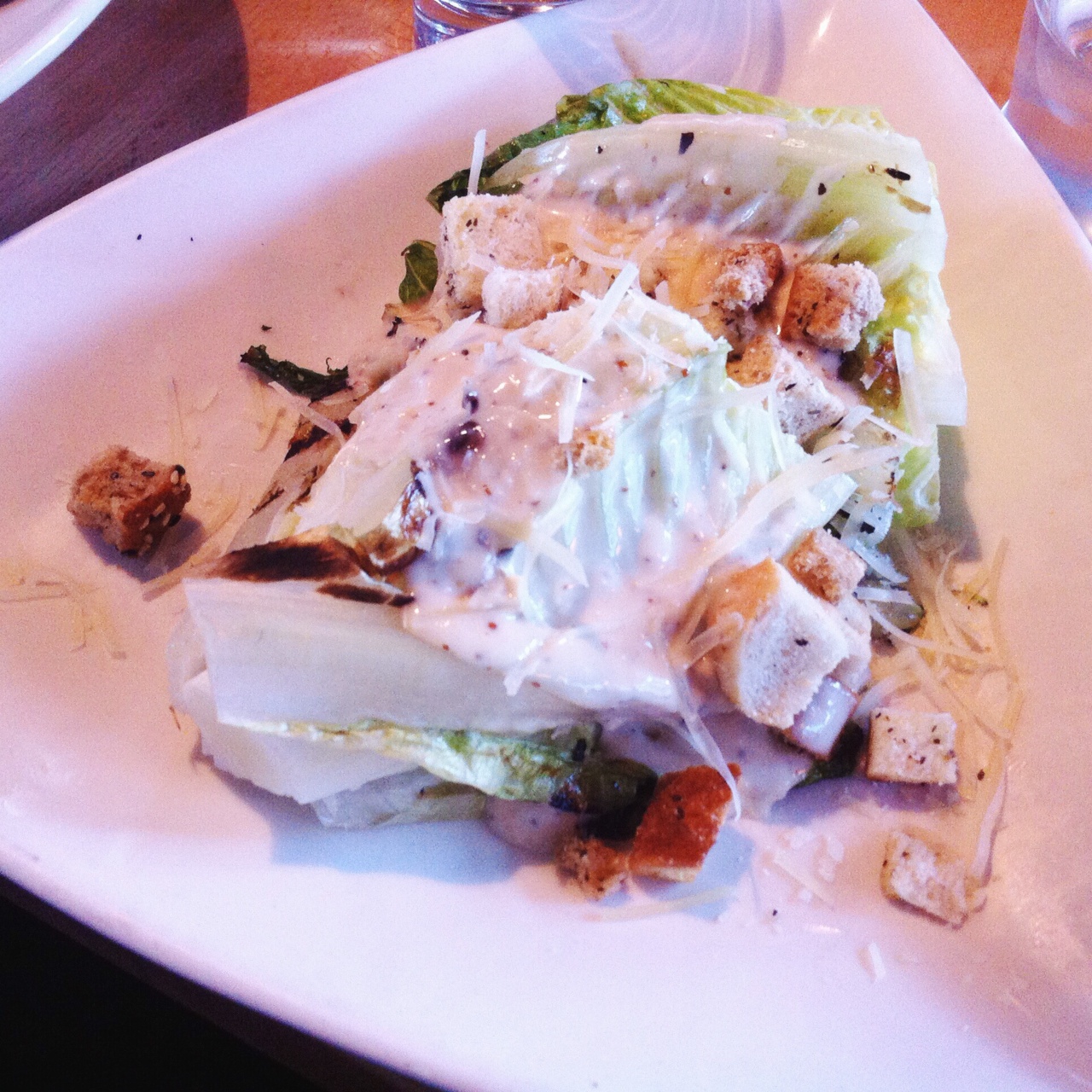 John’s angel hair pasta ($14) was tossed in infused chili oil, onions, pine nuts, mushrooms, roasted tomatoes, garlic, basil, with parmesan and goat cheese for toppings. This normally comes with eggplant, but John asked them not to include it. The chef substituted with mushrooms, which is, unfortunately, another thing he won’t eat. More mushrooms for me! I wouldn’t think to use chili oil with pasta, but it works. 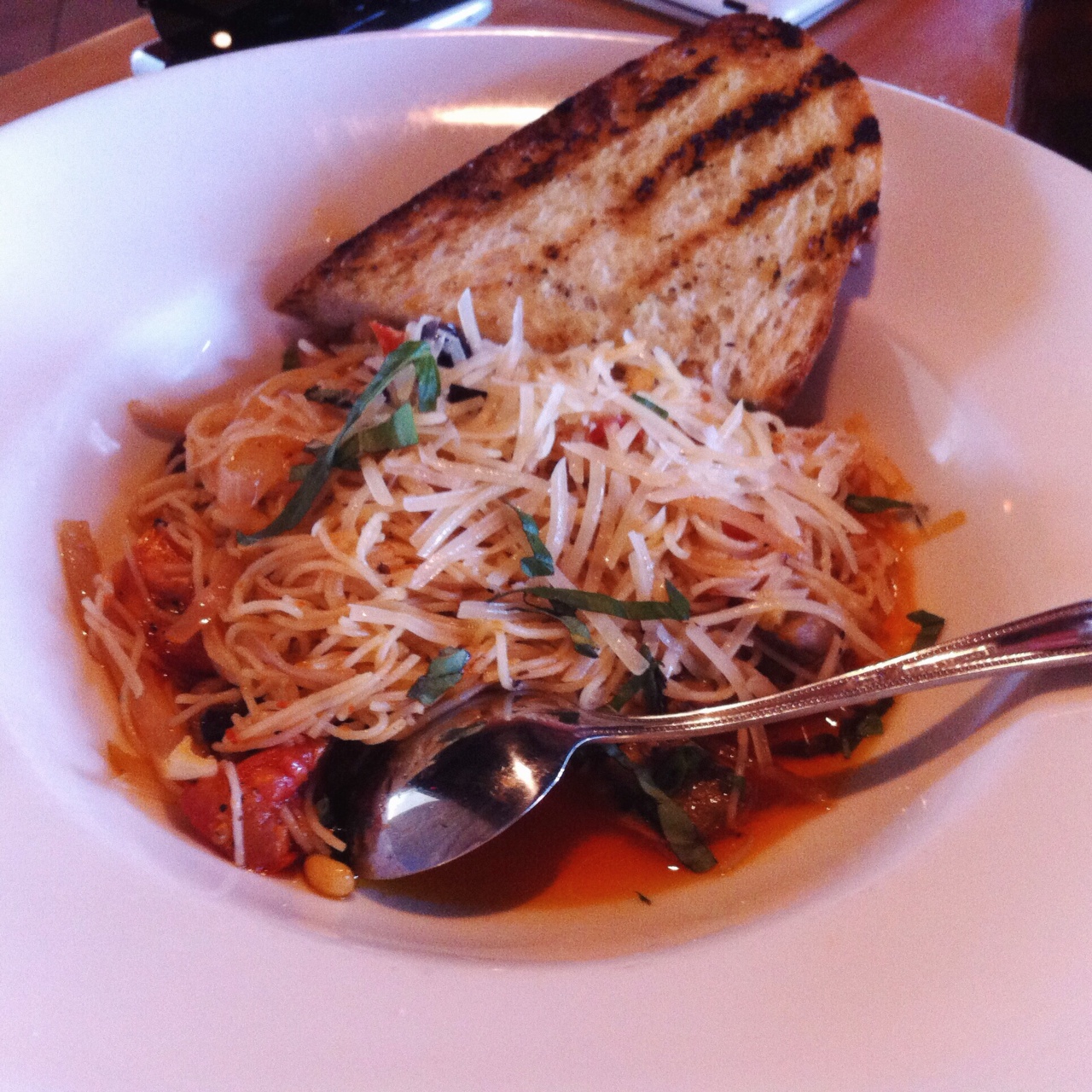 The kitchen must have had a surplus of mushrooms because my spring risotto ($16) also came with mushrooms even though it’s not mentioned on the menu. Creamy lemon zest risotto with asparagus, mushrooms, roasted tomatoes, spinach, onions, parmesan, and asiago cheese. It almost looks like it’s missing a spoonful of risotto, doesn’t it? I rarely have risotto, so this was a real treat, especially with some extra black pepper. 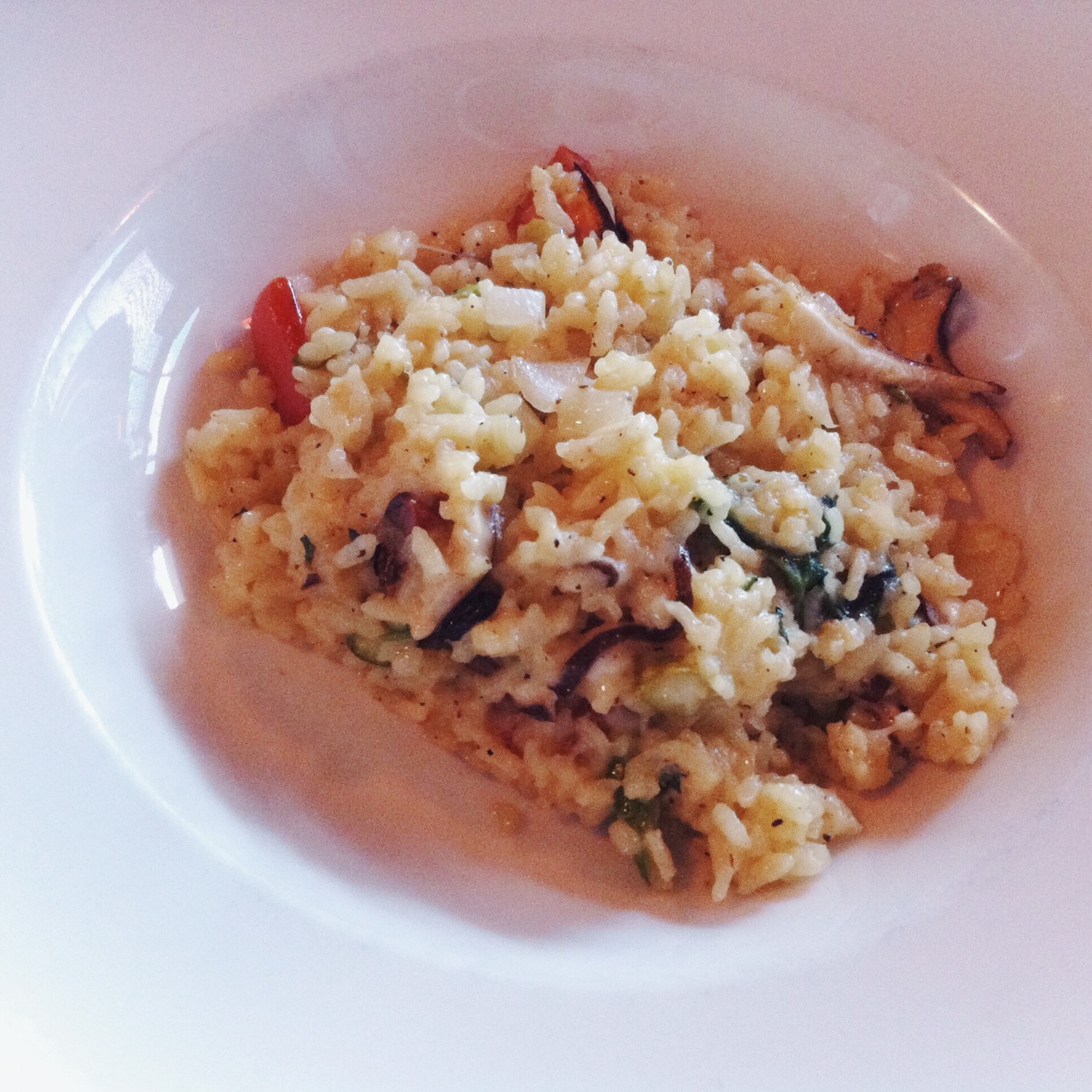 It was very kind of John’s parents to treat us all to dinner. Everyone was too stuffed for dessert as the entrees, including the kids’ meals, had good sized portions. The meat eaters indulged in marinated steak, baby back ribs, and even rotisserie chicken. Everything seemed reasonably priced, and John’s parents were surprised by the total when the waiter brought out the bill. Good spot for dinner if you’re ever in Madison! 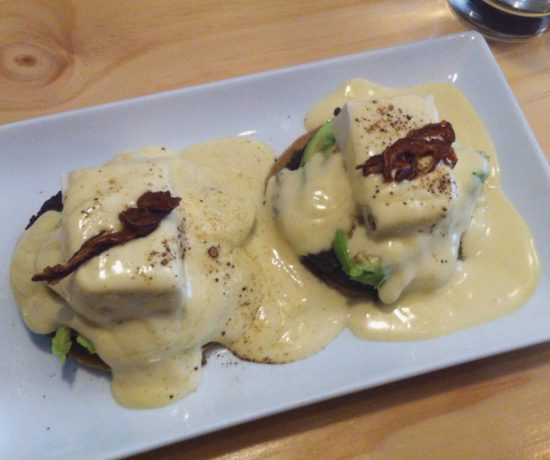 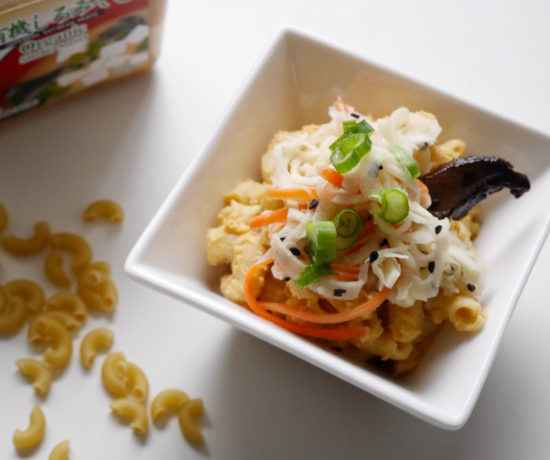