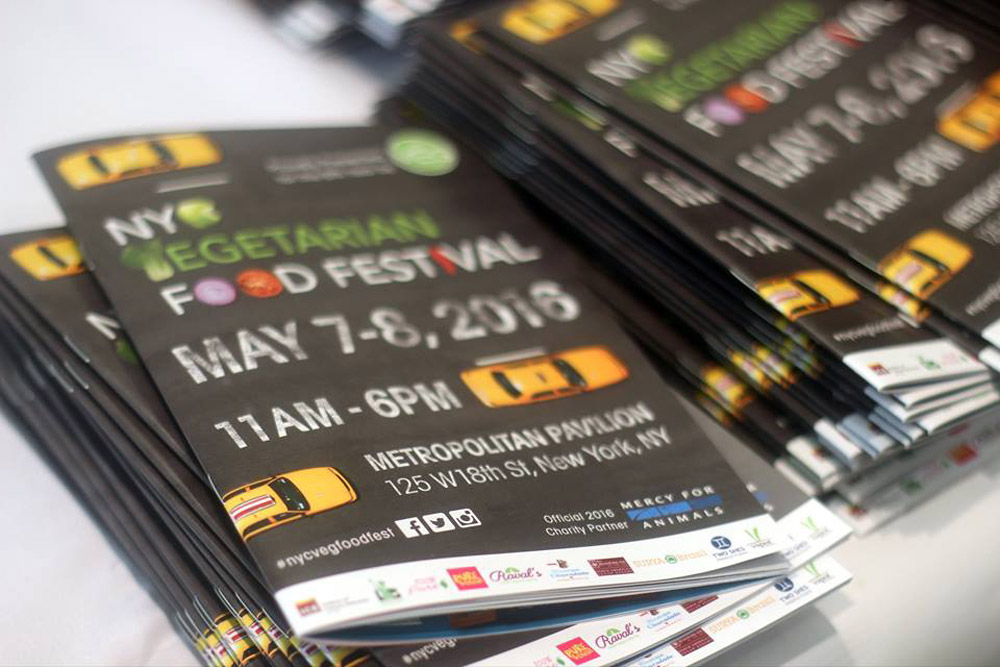 Years ago, when I was getting serious about going vegetarian, I went to a food festival where I sampled all sorts of delicious things from vegan marshmallows to vegan caviar. Fast forward a few years… the 6th annual NYC Vegetarian Food Festival was just days ago, and I spent a good chunk of my weekend eating and learning at the festival. On top of that, it has been such a pleasure designing for this year’s festival! (Photo credit: US Veg Corp) 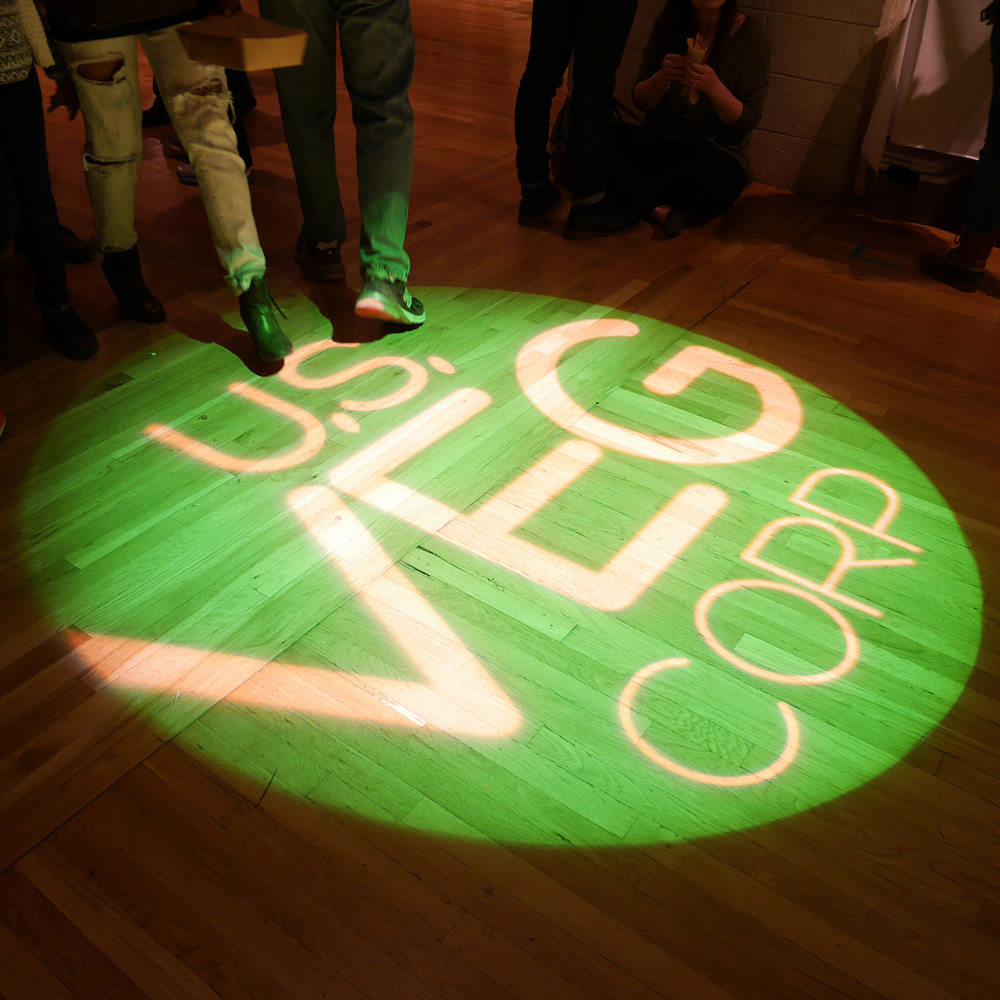 Saturday morning was all kinds of crazy. The line to get into the Metropolitan Pavilion, even for folks with pre-purchased tickets, went down the street and around the corner. Pro tip: if you plan on attending just one day of the festival, go on Sunday. 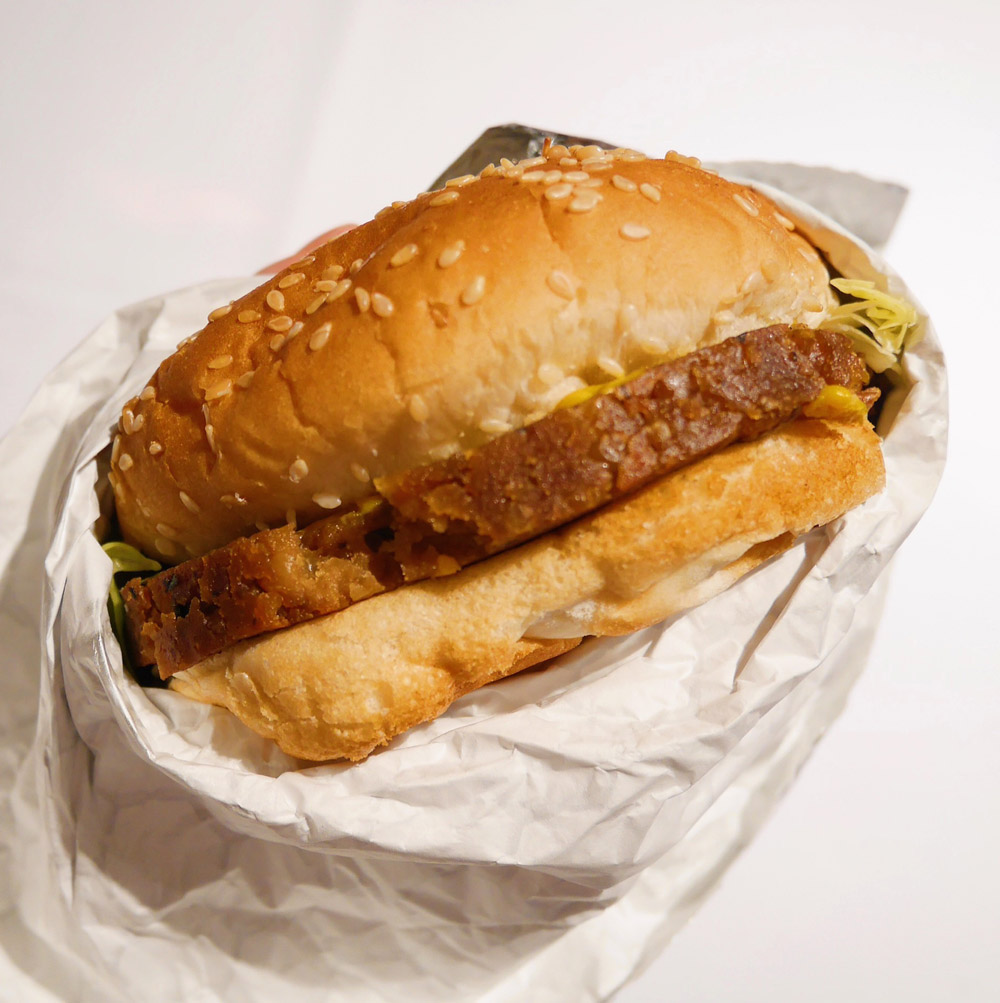 I started my NYCVFF experience with Marty’s Original World Famous burger. Fueled by Marty’s! This is basically a vegan Big Mac with a patty made of seitan, black beans, and brown rice. The vegan cheddar sure is tasty. 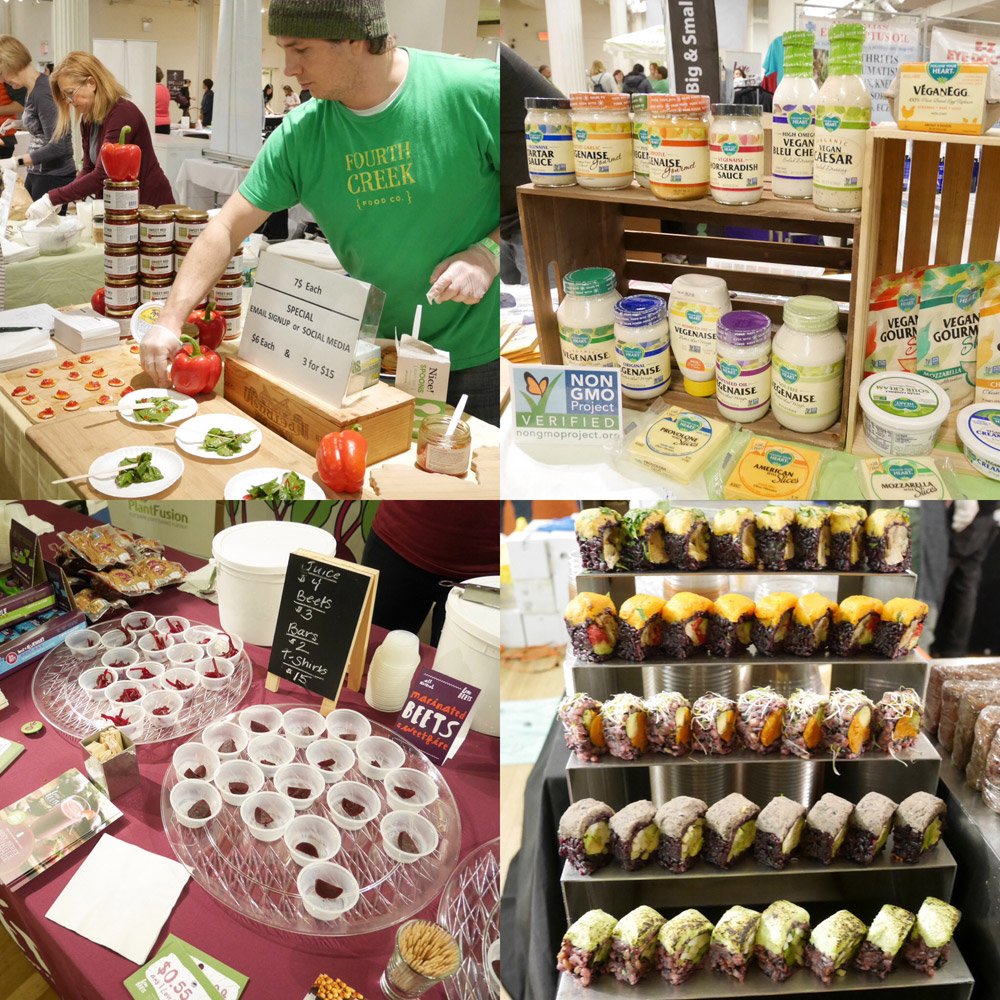 One thing I learned at this year’s festival is that it is possible to get full just from eating samples. A little nibble here, a little nibble there. There’s something for everyone, and even though the festival’s got “vegetarian” in the name, it’s actually 100% vegan. 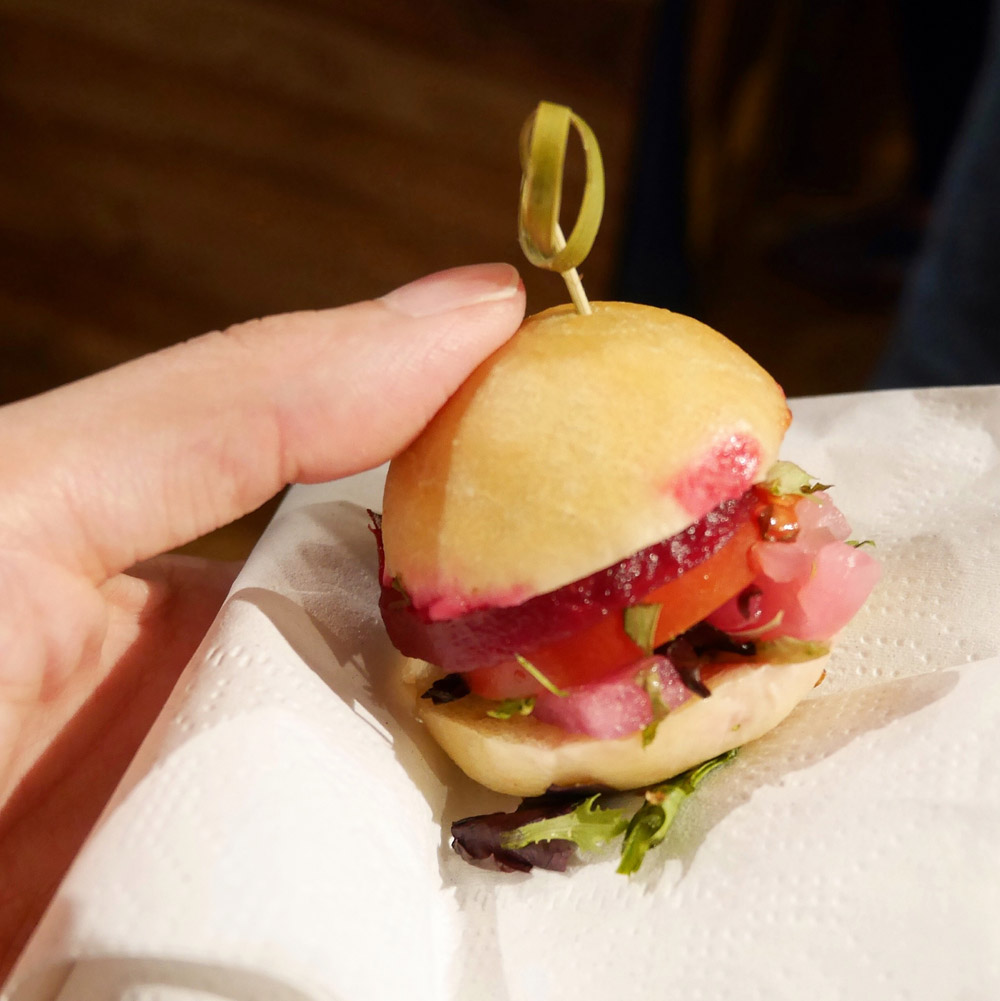 How cute is this teensy tiny beet slider from Fresh & Co? Confession time: I had more than one of these little bites on Saturday. I can’t be the only one who went back for more, right? Hands down, the most adorable snack at the festival. 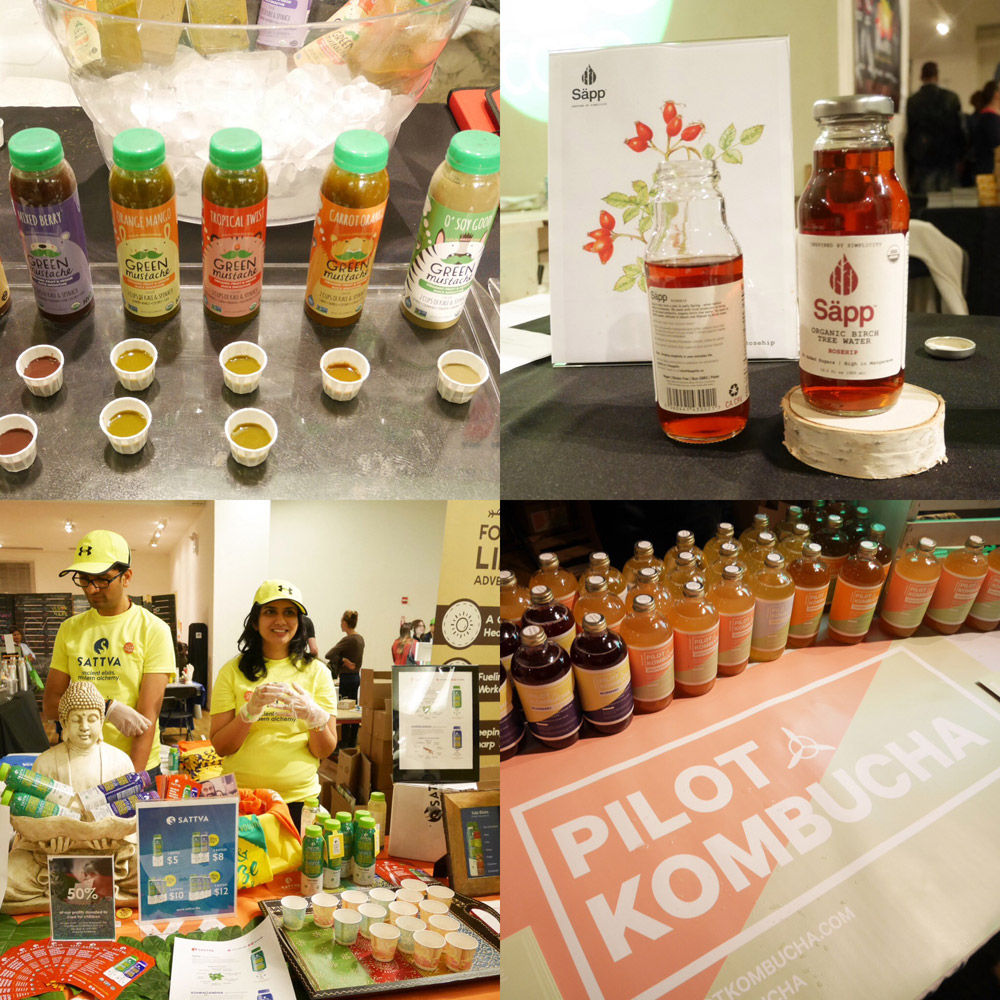 And when you get thirsty from sampling the food, there are beverages to sip on too. Smoothies and juices are nice, but not all that exciting if you make your own at home on a regular basis. This was the first time I had birch water, which has a delicate, piney taste. I think I’m officially hooked on kombucha. 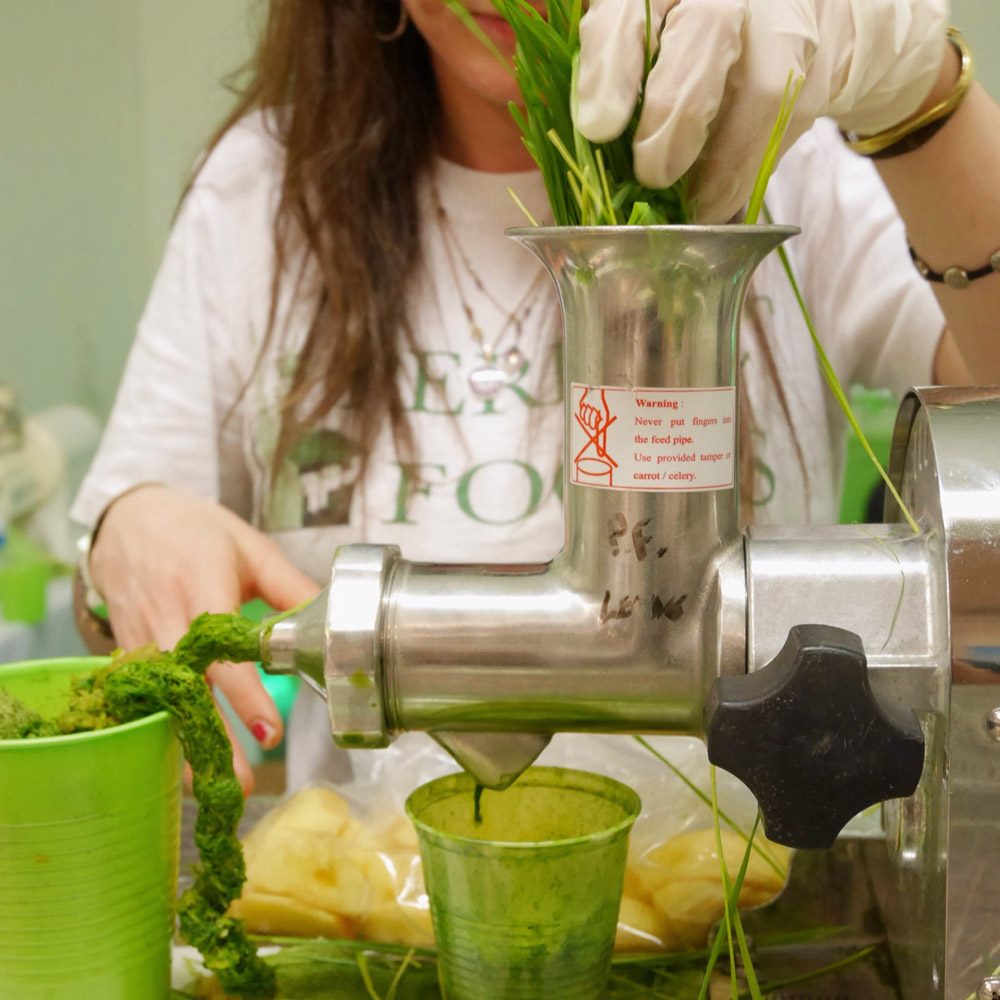 How very vegan of me to get a fresh wheatgrass shot at the wheatgrass bar. The verdict: it tastes like grass. It’s been a while since I’ve bought wheatgrass for my cats. Finally, a treat we can enjoy together! =^.^= 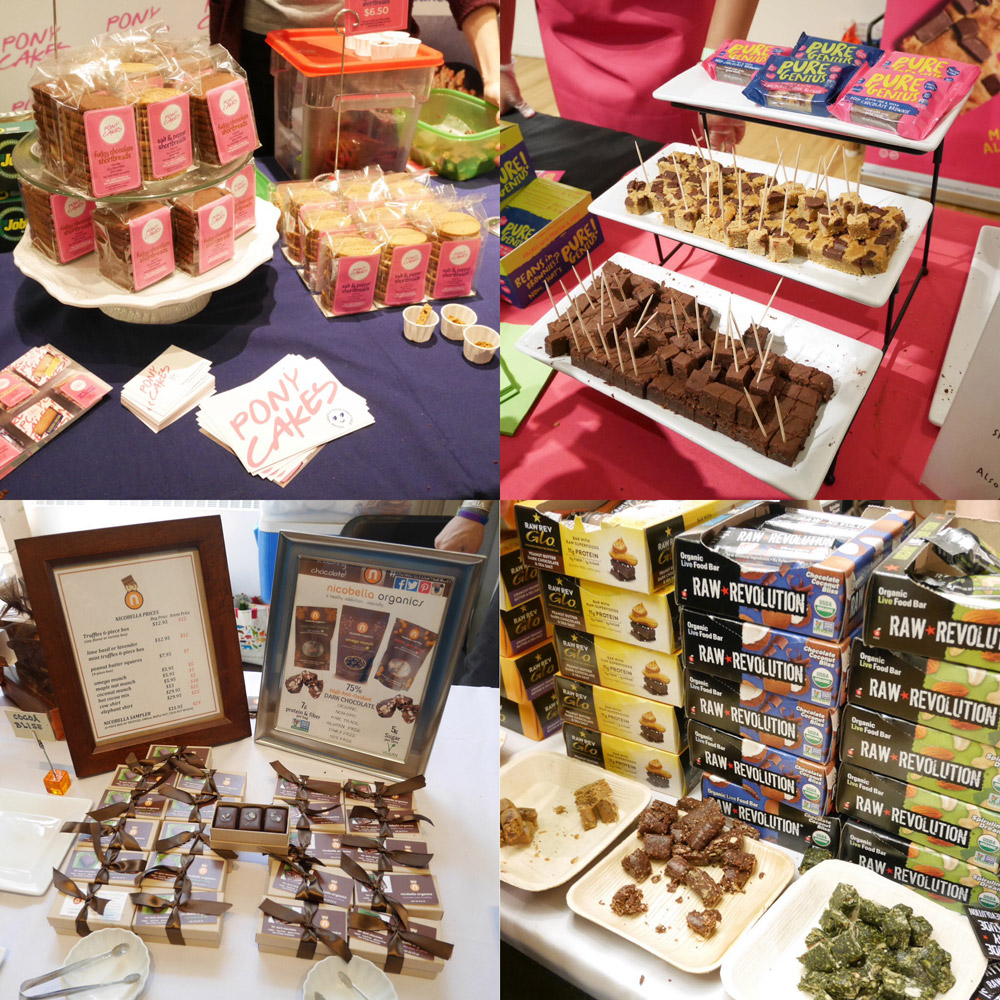 Don’t forget to save room to sample desserts! Cookies, brownies, and chocolate samples piqued my sweets appetite, and I eventually bought a Mexican Spice mini cupcake from Brooklyn Rose Pastries. P.S. The cupcakes were so good, they sold out halfway through the festival.

But the festival isn’t just about food. If you’re like me and are already well acquainted with vegan eats, the talks and cooking demos are a must. Hearing some of the big vegan movers and shakers talk was an inspiring nudge to help me along my vegan journey. 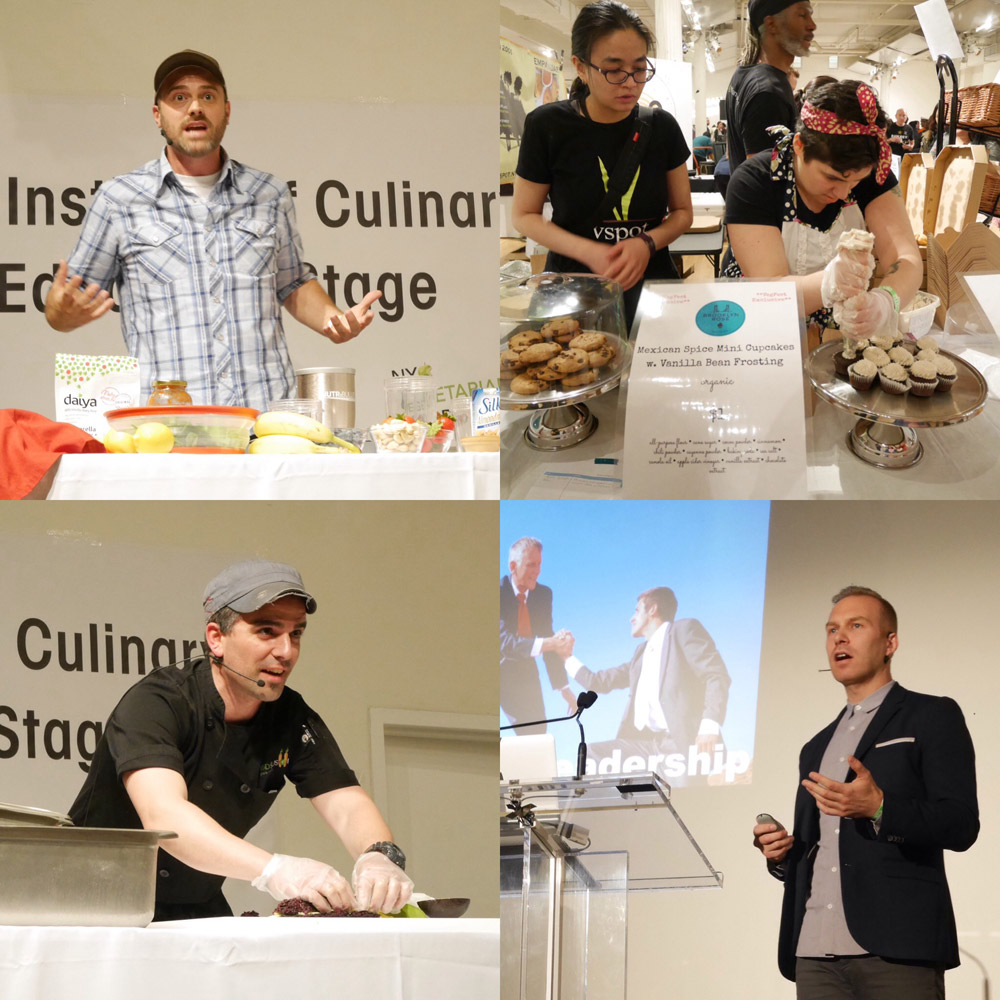 The Vegan Roadie is always fun to watch, and I love when he pulled out an iron during his keeping it vegan on the road demo. Even though I learned some good tricks and tips during Guy Vaknin’s Beyond Sushi demo, I doubt I will be rolling my own sushi anytime soon. Terri has always been one of the best when it comes to sandwiches, and I’m glad I caught owner Craig Cochran’s talk about how Terri got to where it is today. The Banana Stage was so packed for Myq Kaplan’s comedy show that he was barely able to enter and exit! During Lionel’s talk, he asked the audience if anyone was constipated, and one brave soul raised their hand, LOL.

On Day 2, I managed to grab a good spot at the Apple Stage for Dr. Garth Davis’ Proteinaholic talk. (It was impossible to get anywhere close to the stage on Day 1.) This was a very informative talk for vegans, vegetarians, and especially omnivores. Hey guys, eat more fruits and veggies, stop worrying about your protein intake! 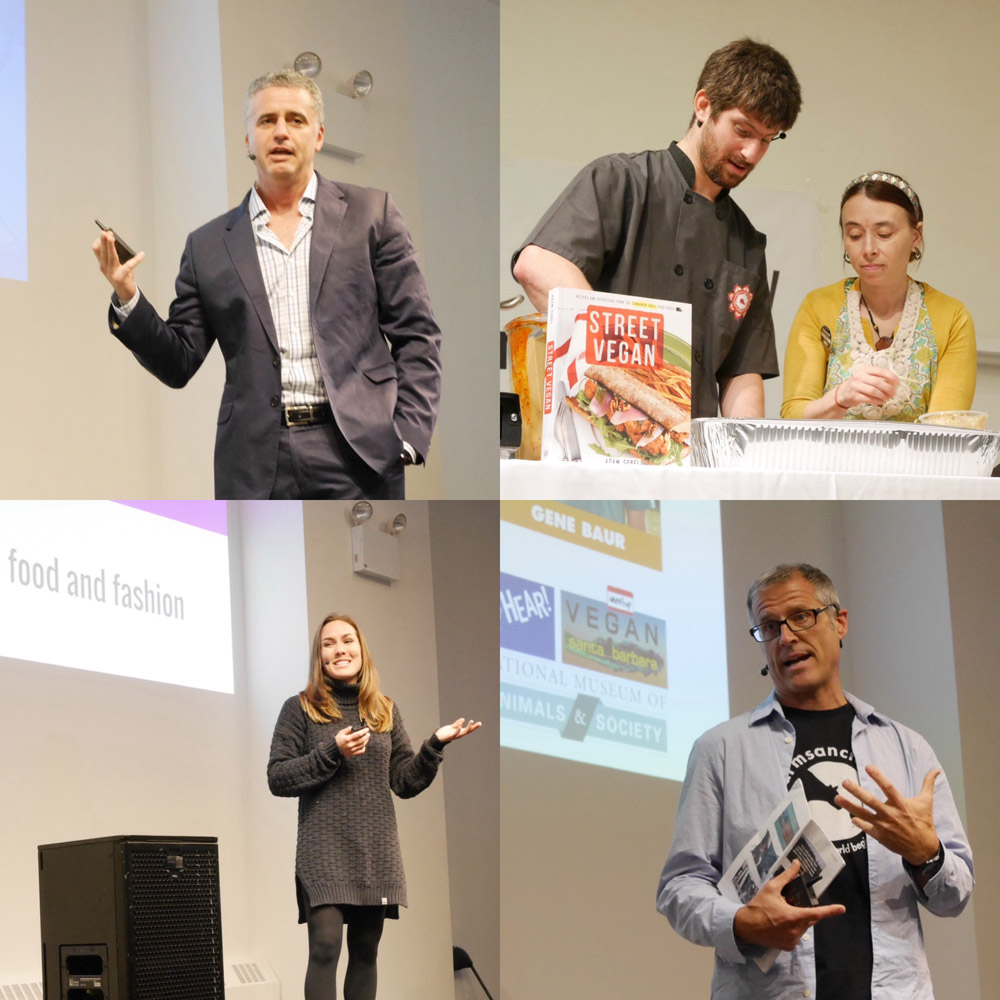 I also stopped by the Pear Stage for the Cinnamon Snail‘s yuba filled bao demo. What a process to make bao! In case you were wondering, Adam Sobel and his wife Joey were both at the festival, but Doyle Huckabee the wallaby stayed home. I haven’t bought any clothing or accessories made from animals in a while, and it was great to learn about more cruelty-free options from Cayla Mackey of Unicorn Goods.

Out of all the talks I attended, the one that made the strongest impression on me was Gene Baur’s. So inspiring to hear him talk about living kindly, heartwarming to hear him talk about the rescued animals at Farm Sanctuary, and incredibly heartbreaking when he spoke of animal suffering. The horrific realities of the factory farming are not new to me, but being in a room where everyone is on the same page and shaking their heads in dismay together makes it hit you much harder. It also just happened to be Mother’s Day that day, and the sad, devastating truth is that female animals are by far the most exploited. 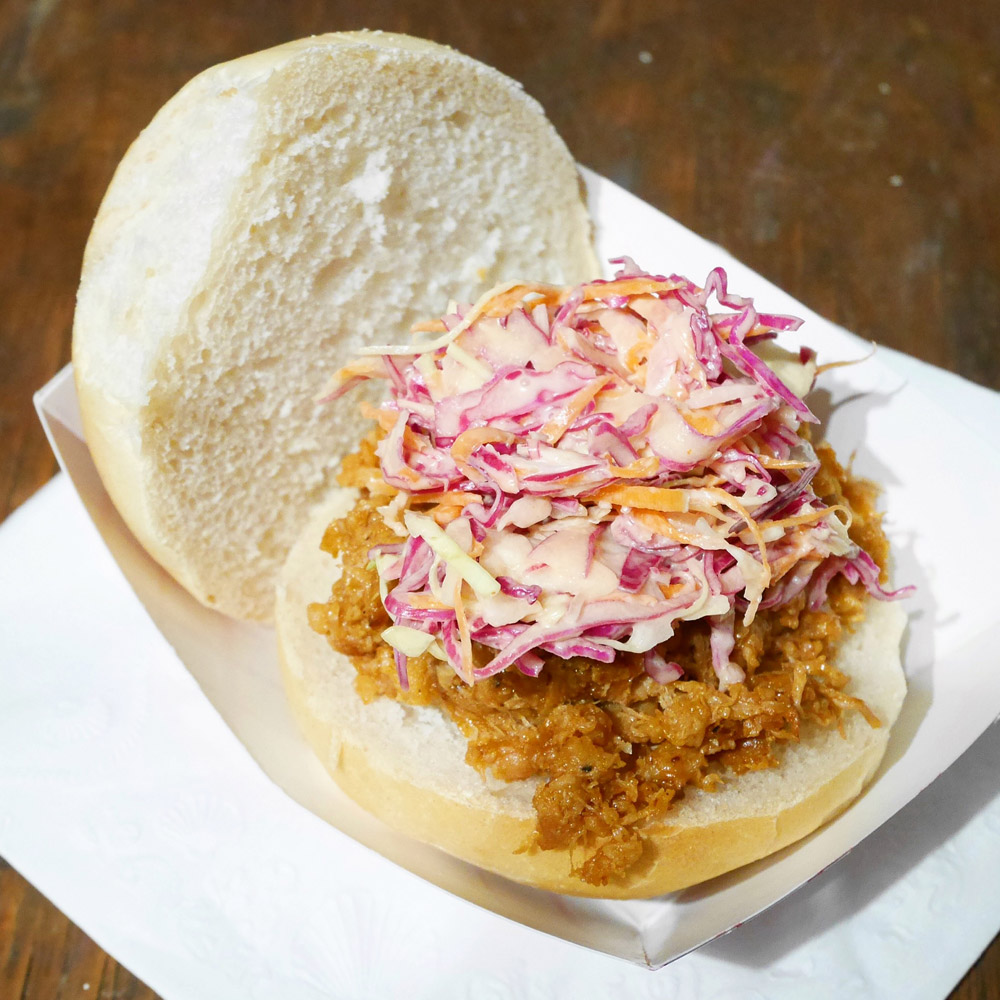 At this point, I needed a good lunch to pick me up. I stopped by Freakin Vegan for a BBQ pulled porkless slider. Too much bun for me, but the pulled “meat” and slaw were tasty together. Fresh & Co pulled out all the stops for the festival and served different bites for Day 2. Loved their mini quinoa burrito bowls! 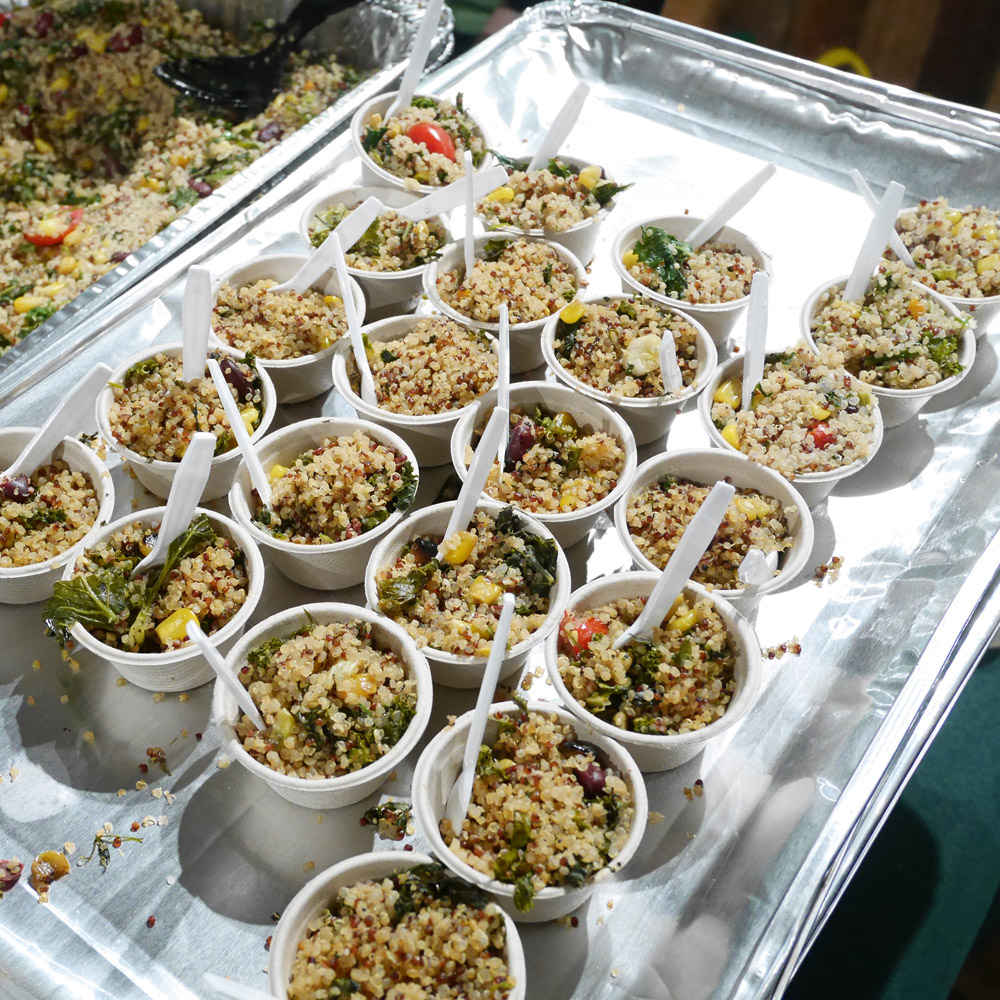 Vitamix was, of course, at the festival too churning out smoothie and soup samples for everyone. I saw Kristin Lejeunesse talk about her journey across the country to eat at every single vegan restaurant. It’s less glamorous than it sounds, especially when you have to deal with going to bathroom and showering on the road, but what a crazy adventure! 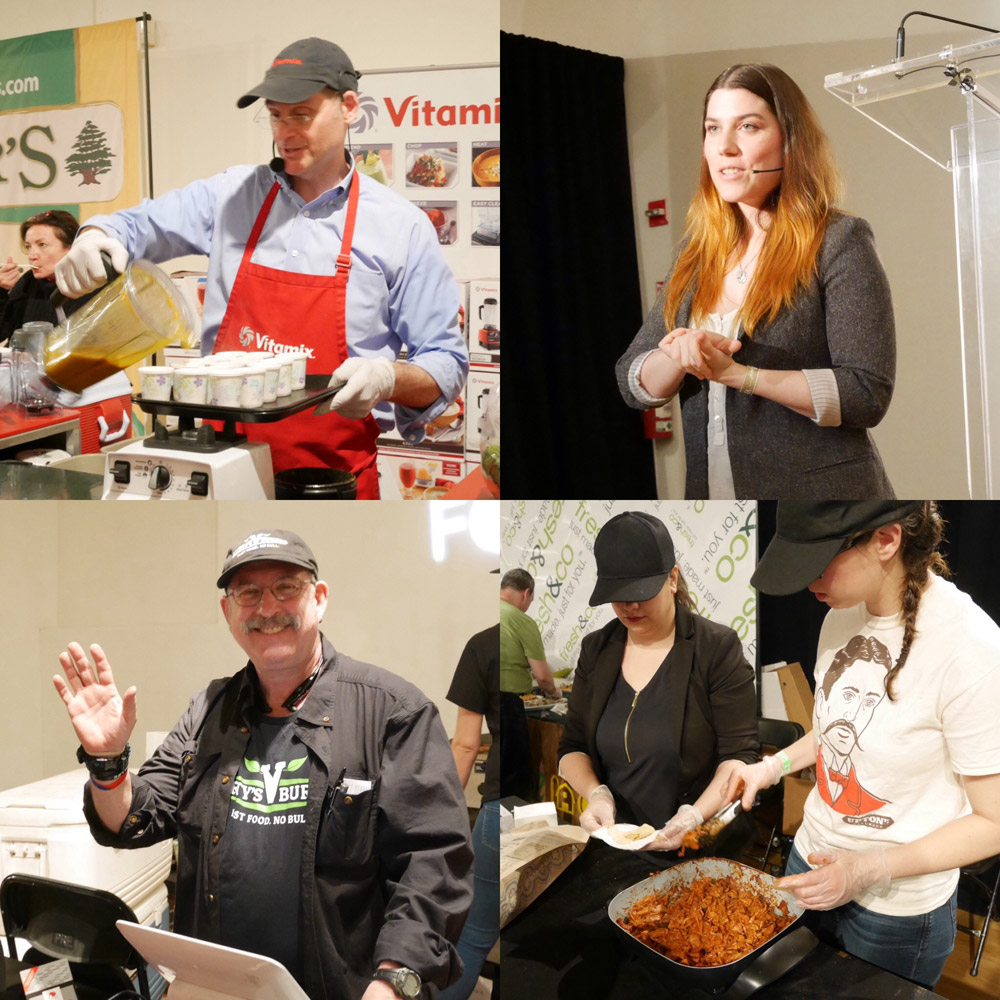 Whenever you grab a bite from Marty’s, be sure to say hi to the man behind the burger. Marty is always very friendly and smiley. One of my favorite samples at the festival was the BBQ jackfruit by Upton’s Naturals. I finally got to try the vegan, cruelty-free faux gras from Regal Vegan. So smooth and creamy! 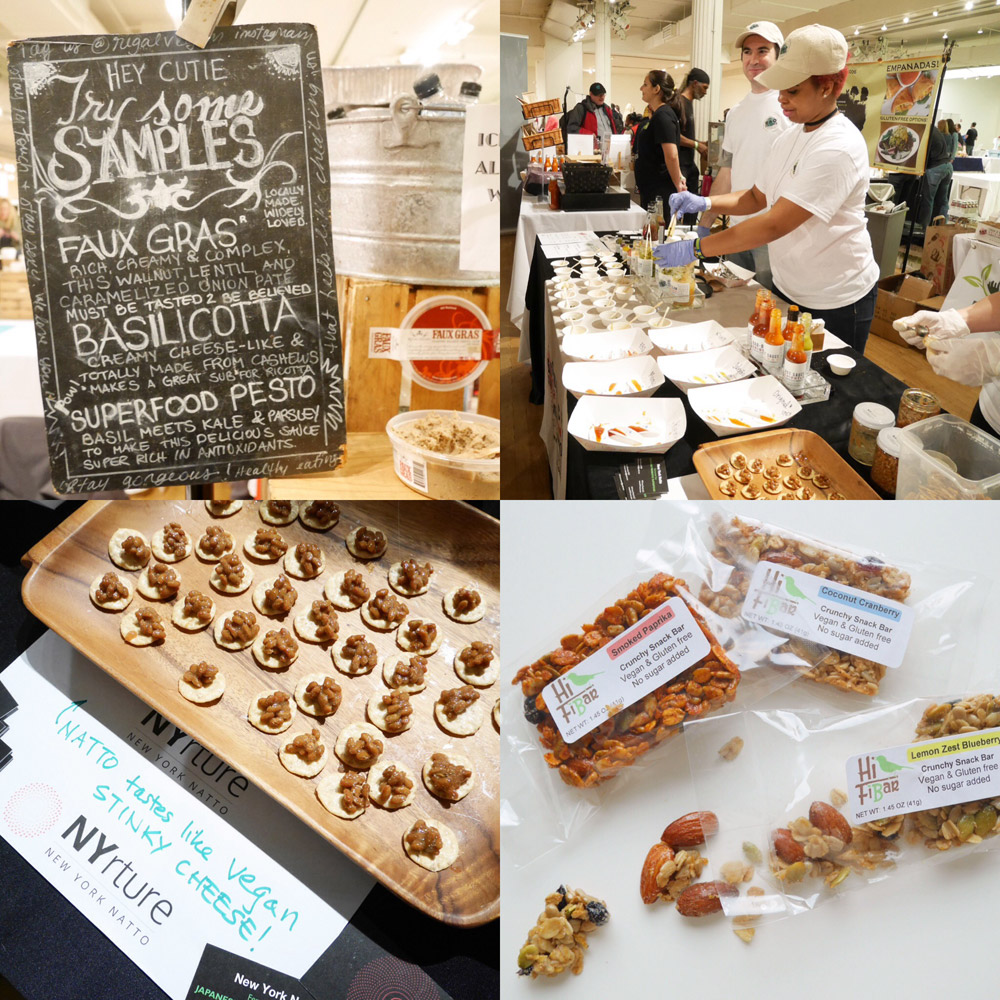 The folks at Bao had an entire table of fermented product samples, from kombucha to slaw to sauces. I also tasted NYrture‘s natto, which they described as vegan stinky cheese. Tasty with a unique texture, but I wouldn’t say it’s cheese-like. It was great to chat with the team from Hi-Fi Bar and sample their healthy bars. There’s no sugar added, but the bars have a yummy natural sweetness to them.

Speaking of sweets, my sweet treat for Day 2 was a generous scoop of chocolate almond fudge ice cream from DF Mavens. So there you have it, my weekend of eating, drinking, listening, and learning at the 2016 NYC Vegetarian Food Festival! 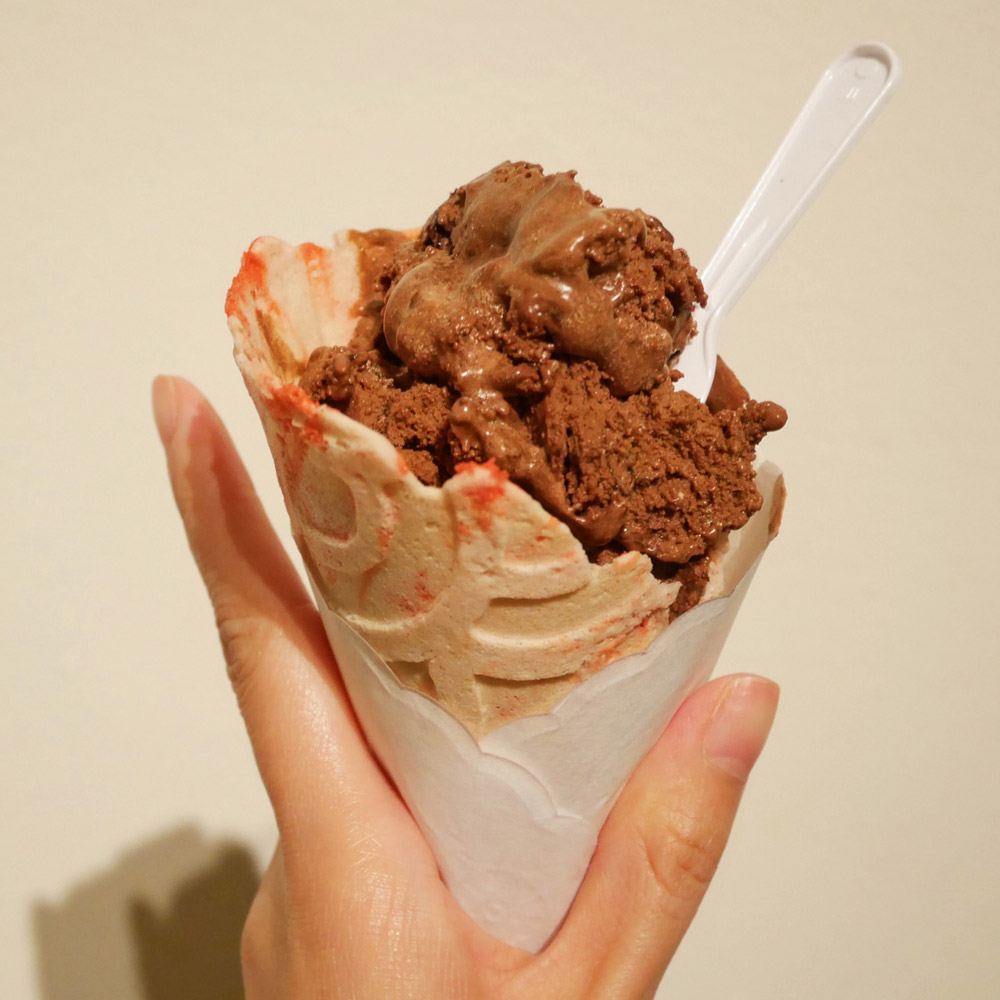 Note: This post is in collaboration with U.S. Veg Corp. I attended this event as a guest and member of the U.S. Veg Corp team. This was not in exchange for a positive review and all opinions expressed here are my own. 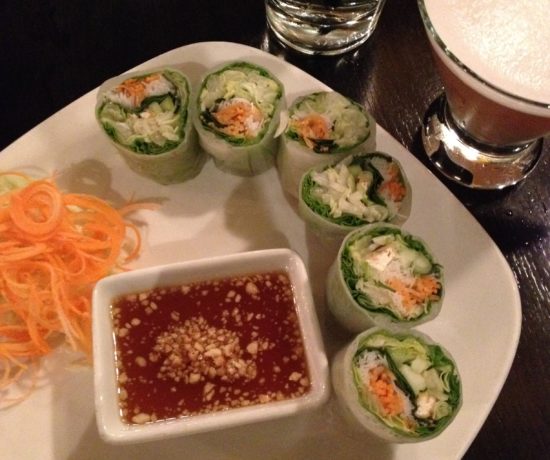 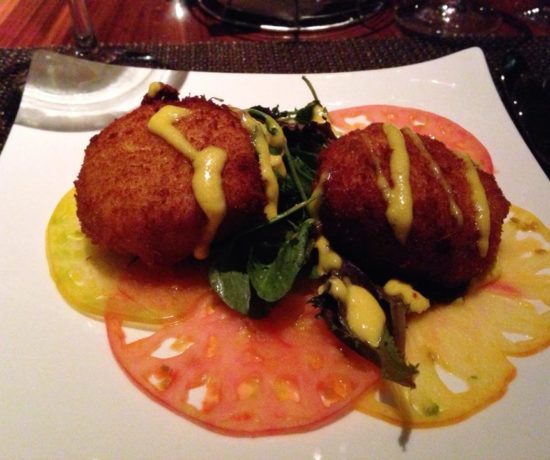 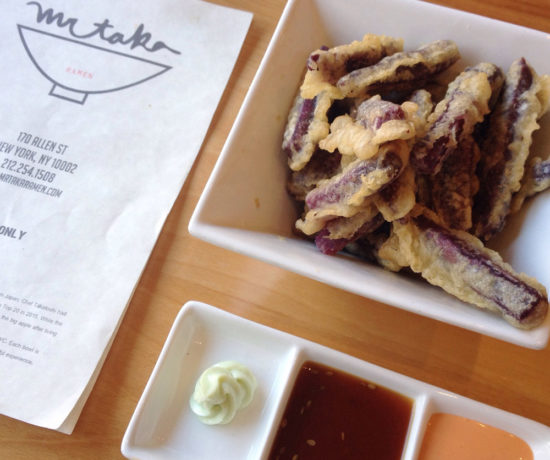