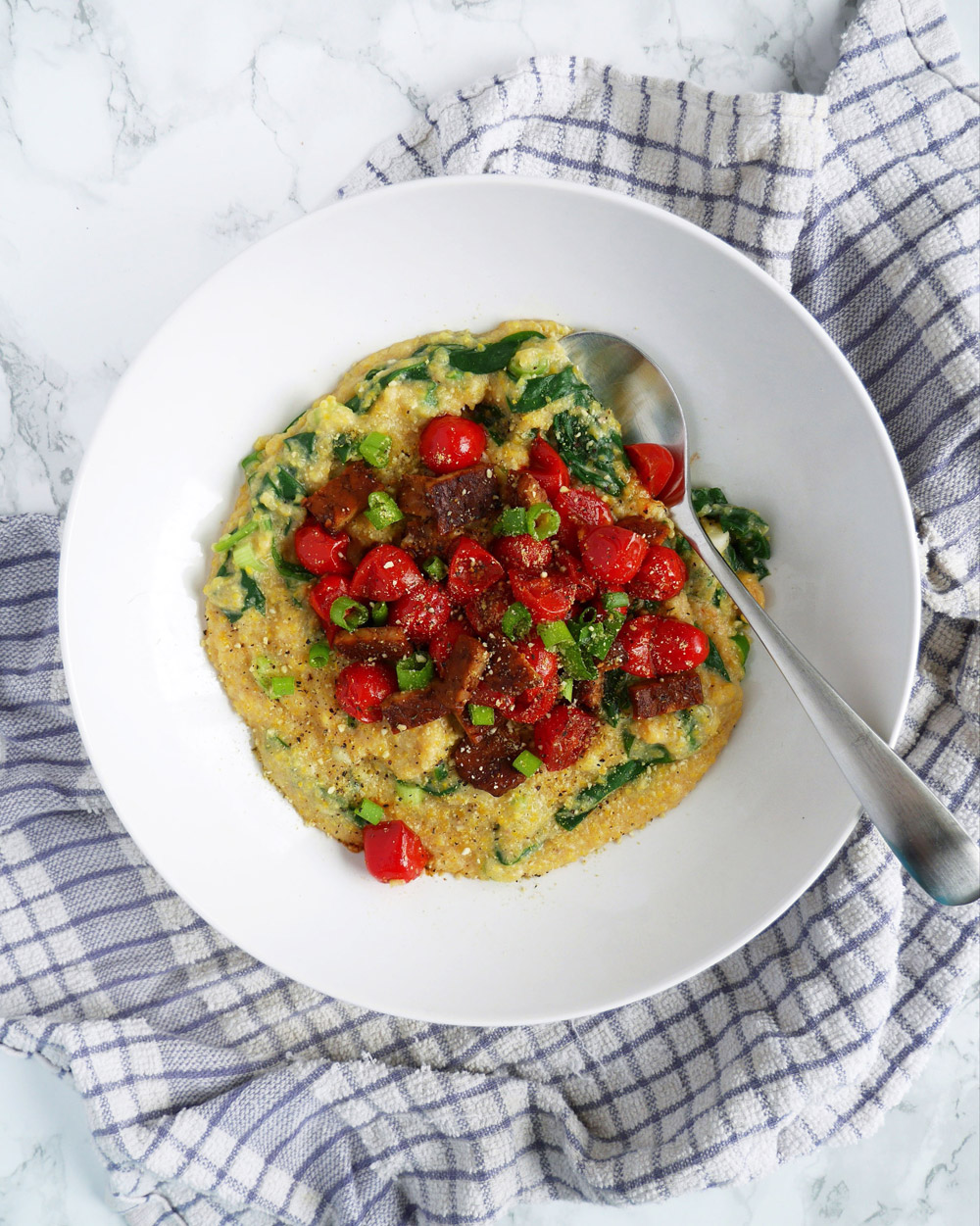 I’m not sure when it happened, but polenta corn grits have become one of my favorite foods. It’s creamy and comforting, and you can dress up corn grits with different flavors and toppings to suit your fancy for any meal of the day. This vegan polenta corn grits with tempeh, spinach, and tomatoes recipe makes a hearty weekend brunch or a satisfying weeknight dinner.

To be honest, I was feeling a little down when I was cooking and shooting this recipe. How much our moods translate to cooking and eating? Can one off or bad day can potentially ruin a specific dish or a dining experience forever? For example, when I was in college, a boyfriend broke up with me after we had dinner, and I could never bring myself to return to the restaurant where it happened even though there was nothing wrong with the food or service at the restaurant. It was the bad memory that was associated with that meal.

However, in the case of this recipe, after I was all done with photos and ready to dig into this colorful bowl of corn grits with tempeh, I was already starting to feel better. And it was not just because I had checked a project off my to-do list and it was time to eat. I believe it was the process of preparing and capturing this dish that did it for me. Food can be both nourishment and entertainment, and the cooking process can be thoughtful and therapeutic if you allow it to be, rather than viewing it as a chore. A simple, but yummy meal can bring some cheer into your life, and it doesn’t hurt if it’s packed with rich flavor and vibrant colors. 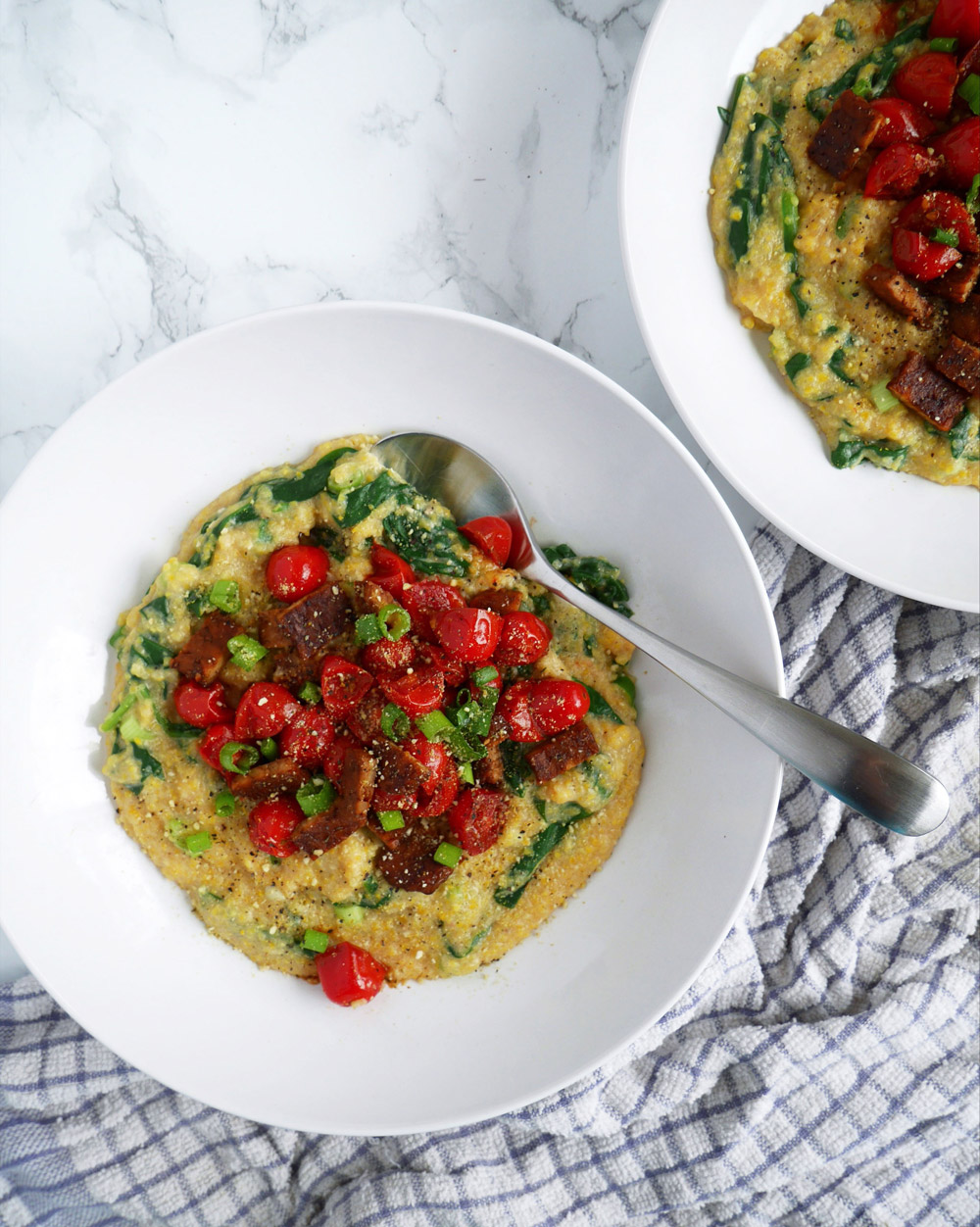 This savory polenta corn grits with tempeh recipe combines creamy vegan grits with wilted spinach, crispy tempeh bacon, and juicy tomatoes. In this recipe, the grits are cooked in the same pan that was used for the tempeh and tomatoes. Not only does that cut down on dishes, but the juices add tasty flavor and a touch of color to the grits. I like stirring some greens into my dishes for the health benefits, and in this polenta dish, the spinach feels right at home among all the other ingredients. Enjoy!

Heat a little of cooking oil in a large non-stick pan. Add the tempeh and soy sauce. Cook each side for 2-3 minutes over high heat until both sides are browned and crispy. Set tempeh aside to cool before cutting into smaller pieces.

Combine the butter, water, and 1/2 cup milk in the pan. Bring to a boil, then add the polenta corn grits. Reduce to medium heat and cook for 5 minutes, stirring often.

Stir in the spinach, scallions (save some of the green parts for garnish), and add the remaining 1/2 cup milk. Continue cooking on low heat, stirring frequently, until the spinach is wilted.

Divide into two serving bowls. Top with tempeh, tomatoes, and the rest of the scallions. Finish with black pepper and a sprinkle of vegan parmesan. 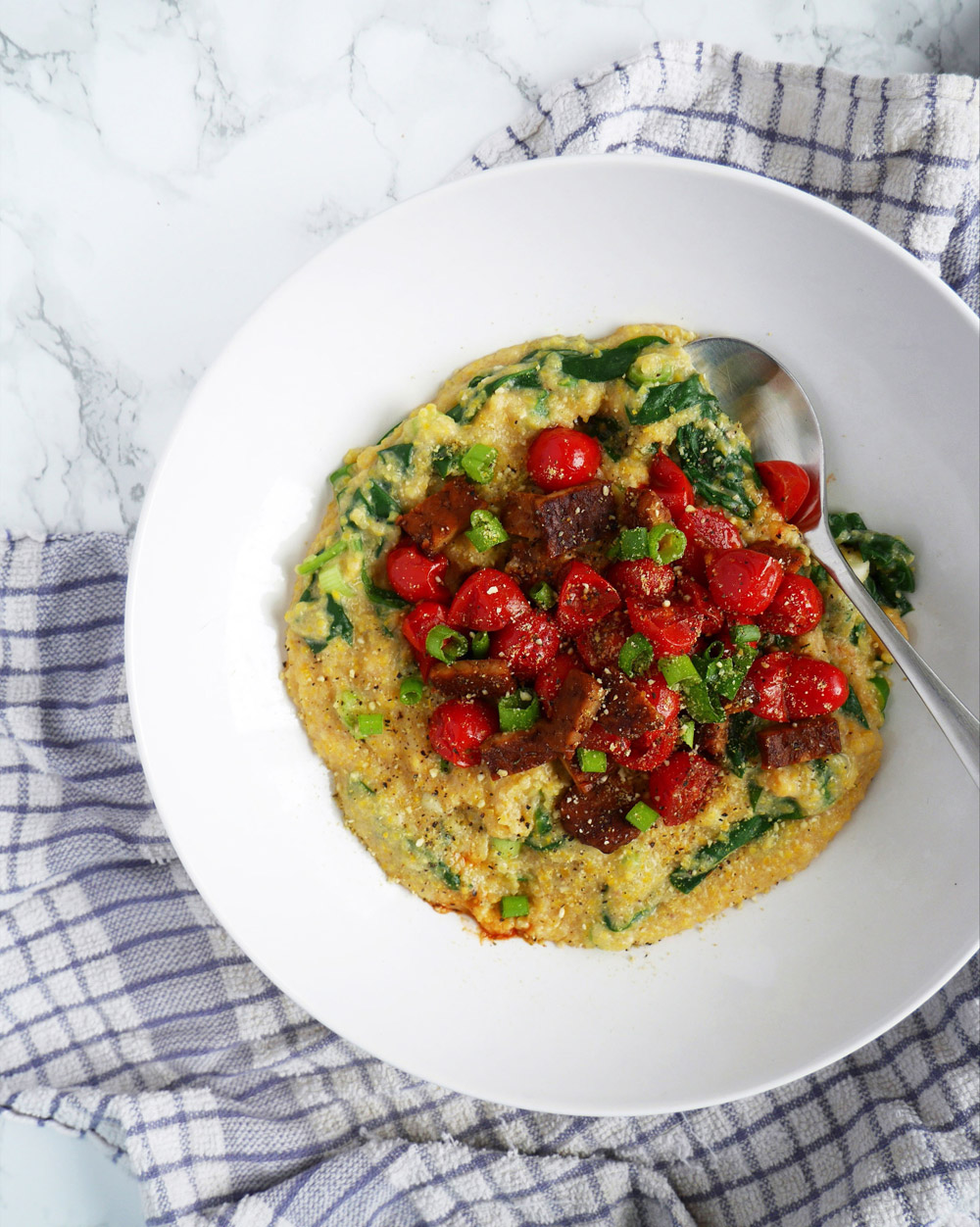 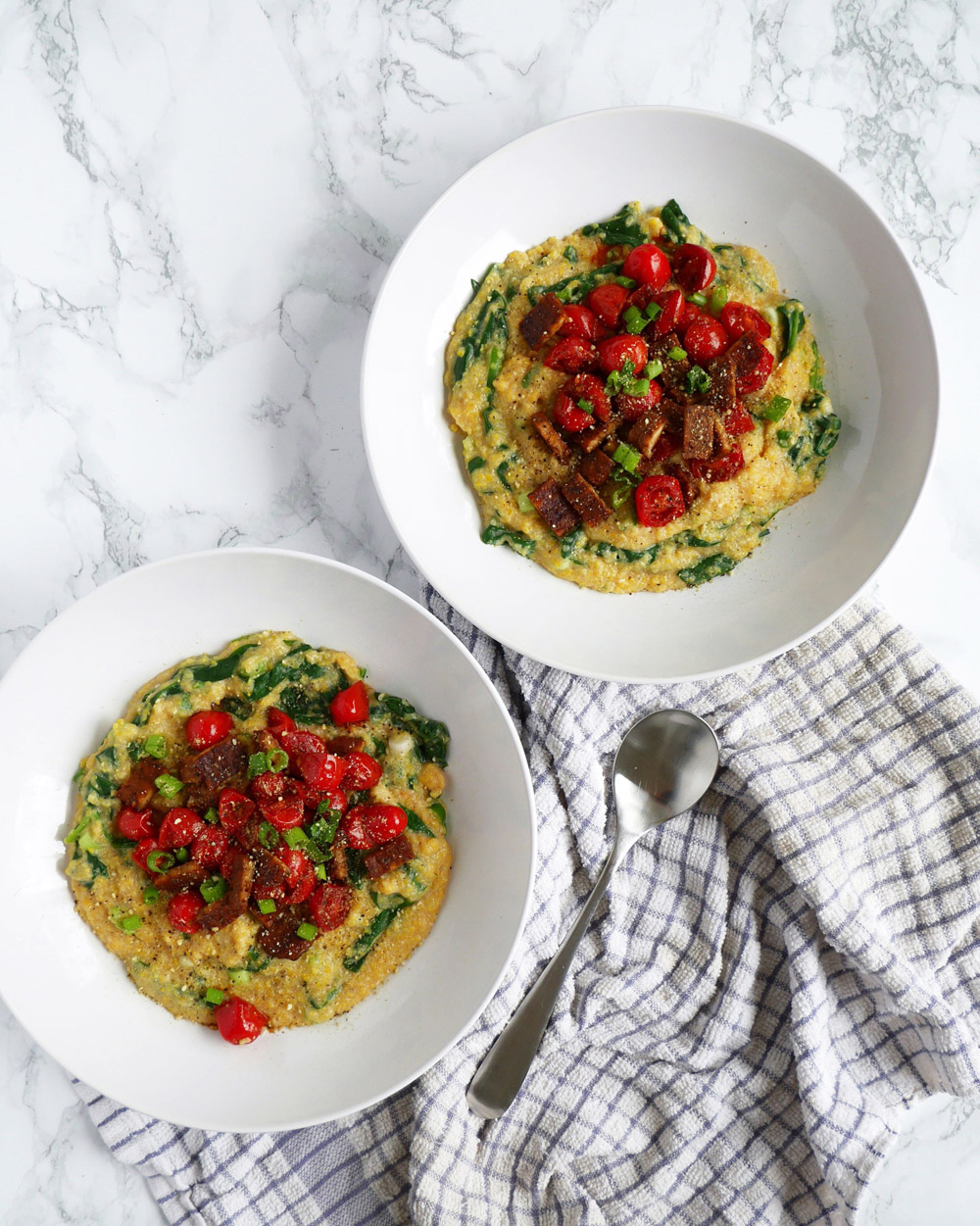 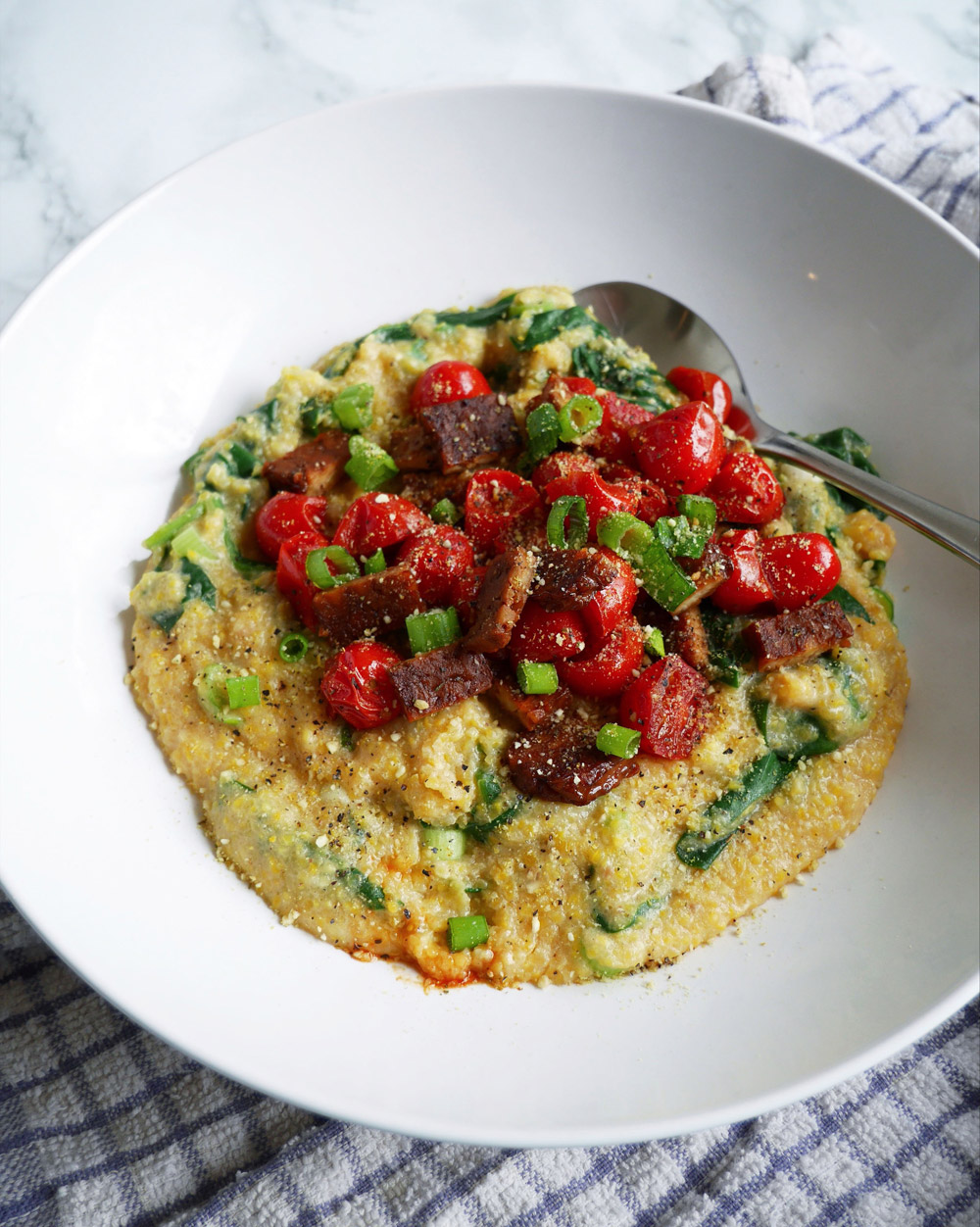 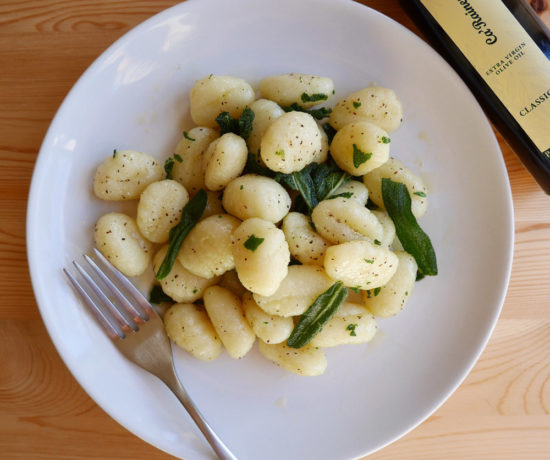 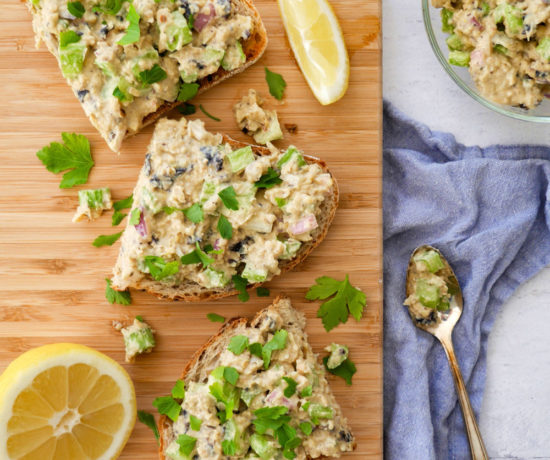 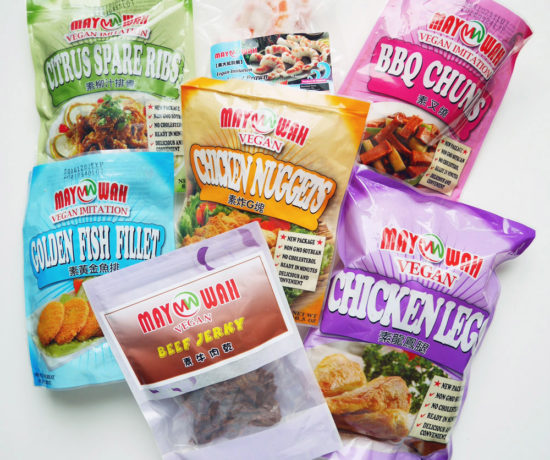