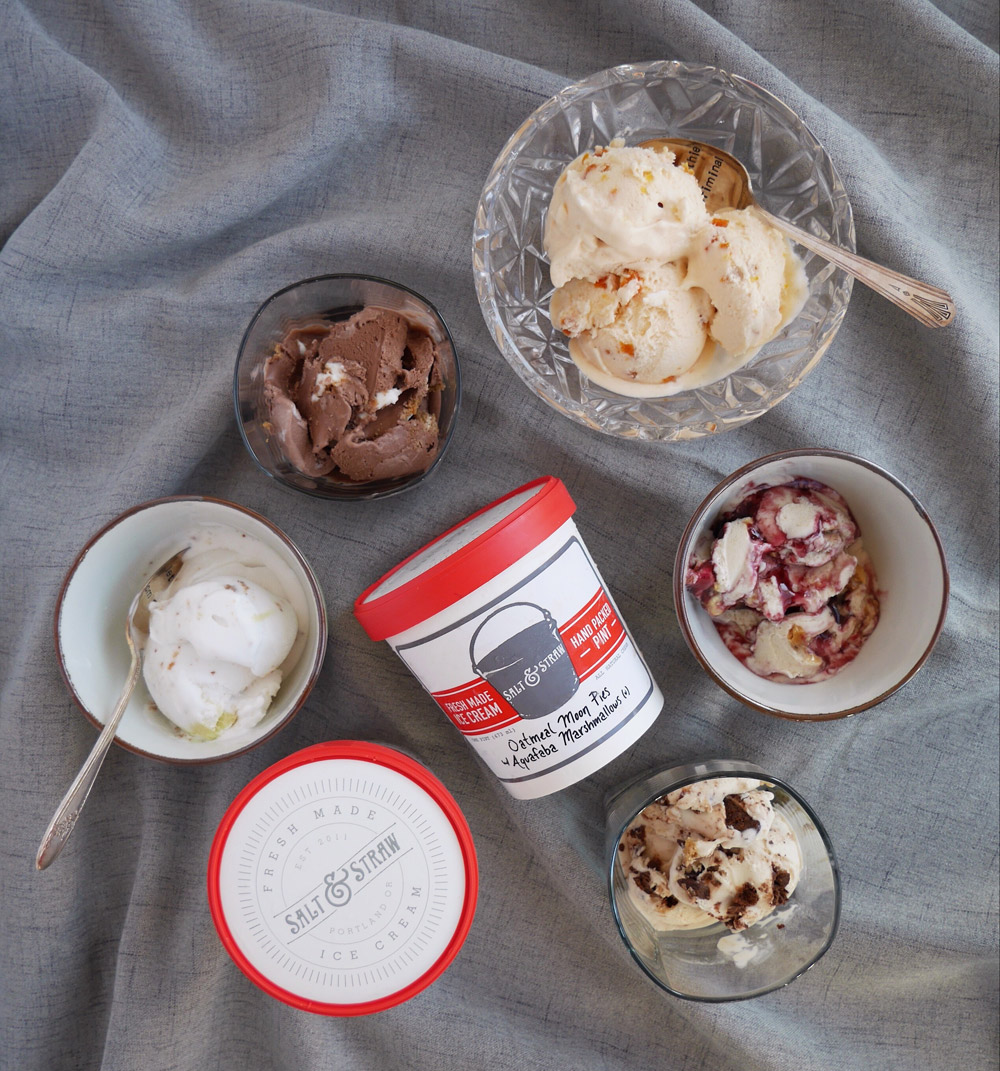 Many thanks to Salt & Straw for this special delivery of ice cream. As always, all opinions are my own.

Some people start the new year with juice cleanses. Others start the new year right with ice cream. To kick off 2019, Salt & Straw launched their Vegandulgence Series: a collection of five vegan ice cream flavors that are so rich, creamy, and indulgent that most omnivores can’t tell the difference from the dairy-based ice cream. If you haven’t tried Salt & Straw’s vegan ice cream flavors yet, get yourself to a Salt & Straw shop ASAP because they are seriously delicious.

Founded in 2011 by cousins Kim Malek and Tyler Malek, Salt & Straw is a Portland-based and family-run ice cream company with three scoop shops here in Portland and many more in Seattle and throughout California. The menu rotates every four weeks so every visit to the ice cream shop can be a unique experience. Known for their small batch, hand made ice cream, Salt & Straw has always offered vegan flavors, but this January’s vegan ice cream series marks the beginning of something extra special. Salt & Straw’s new year’s resolution is to commit to having a 20% plant-based menu throughout the year. That means one in every five Salt & Straw flavors will be vegan. Anyone else ready to do a little happy dance with me?

Okay, fellow vegans, we need to have a little talk. On social media, I’ve seen some vegans dismiss this news because it’s only 20%. Yes, 20% vegan is still small compared to the 80% that will still be made of dairy. However, keep in mind that Salt & Straw is a local, artisanal shop with a lot of influence and a major cult following. People wait in long lines for a scoop of Salt & Straw ice cream, and the Salt & Straw name is recognized by foodies all over the country. It’s only 20% vegan (for now), but that is 20% less dairy on the menu. That is progress, and if there’s a demand for more vegan flavors, they will shift even further in that direction. Supply and demand. 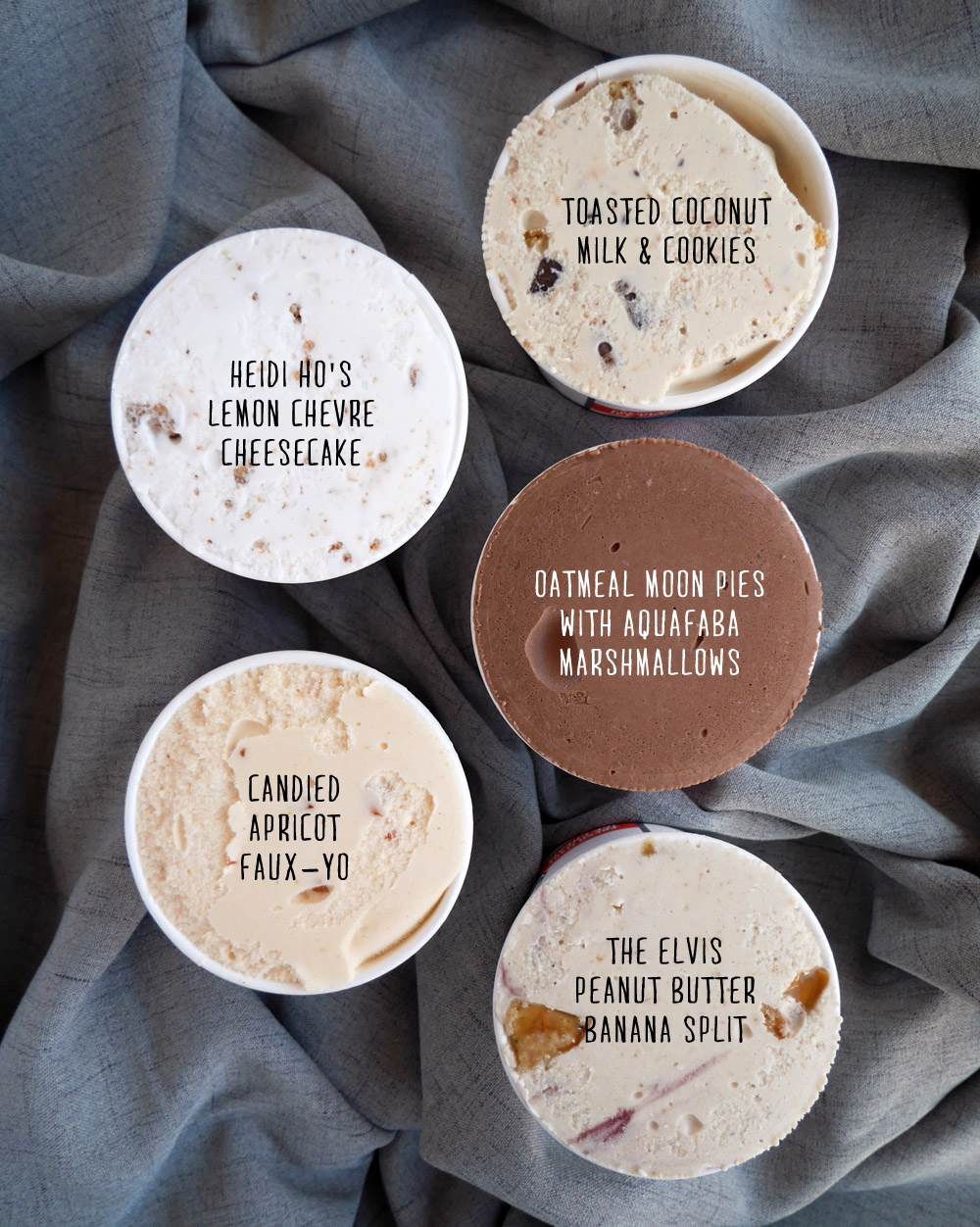 Let’s get down to the yummy part, shall we? There are five flavors in the January 2019 vegan series, and they are available by the scoop, pint, or flight at all Salt & Straw locations. The tasting flight of four flavors is $9, but you can do like I did last year and get a scoop of the fifth on side.

This year, I was lucky enough to receive a special delivery of the Salt & Straw vegan ice cream flavors. Honestly, they’re all delicious. I’m no stranger to making vegan ice cream, but dang, mine never turn out as creamy as Salt & Straw’s. Also, while styling and shooting these photos, I learned that my ice cream scooping skills are not on par with how they do it at the shop. That’s okay. I’m better at eating ice cream anyway. ;)

If you’re only going to get one flavor of ice cream, this is The One. Extra rich coconut ice cream with dark-toasted shredded coconut and a hint of molasses for depth complexity. Gluten-free salted chocolate chip cookies and velvety chocolate ganache. Hello, sweet, salty, cream, and fudgy.

This one’s for the chocolate lovers. As if Salt & Straw’s chocolate coconut ice cream isn’t indulgent enough, they’ve blended in toasted oatmeal and chickpea cookies, aquafaba marshmallows, and chocolate stracciatella. For those who aren’t in the know, aquafaba is the leftover water from chickpeas and a special ingredients to many vegan treats (like my homemade cheese!).

If you’re looking for something a little lighter, this bright and tangy vegan froyo is your friend. Cultured coconut cream meets apricots, vanilla, and lime. The pieces of candied apricots are such a treat. I wouldn’t normally gravitate toward something apricot flavored, but this froyo is very addictive.

Last, but not least, we’ve got Salt & Straw’s vegan homage to the King’s favorite food: peanut butter, bacon, and banana sandwiches. Ripe bananas, coconut ice cream, cashew butter, marionberry jam, crunchy peanut butter “bacon” brittle. Sweet, salt, and so delicious. I made a little bit of a mess in my kitchen thanks to that marionberry jam. 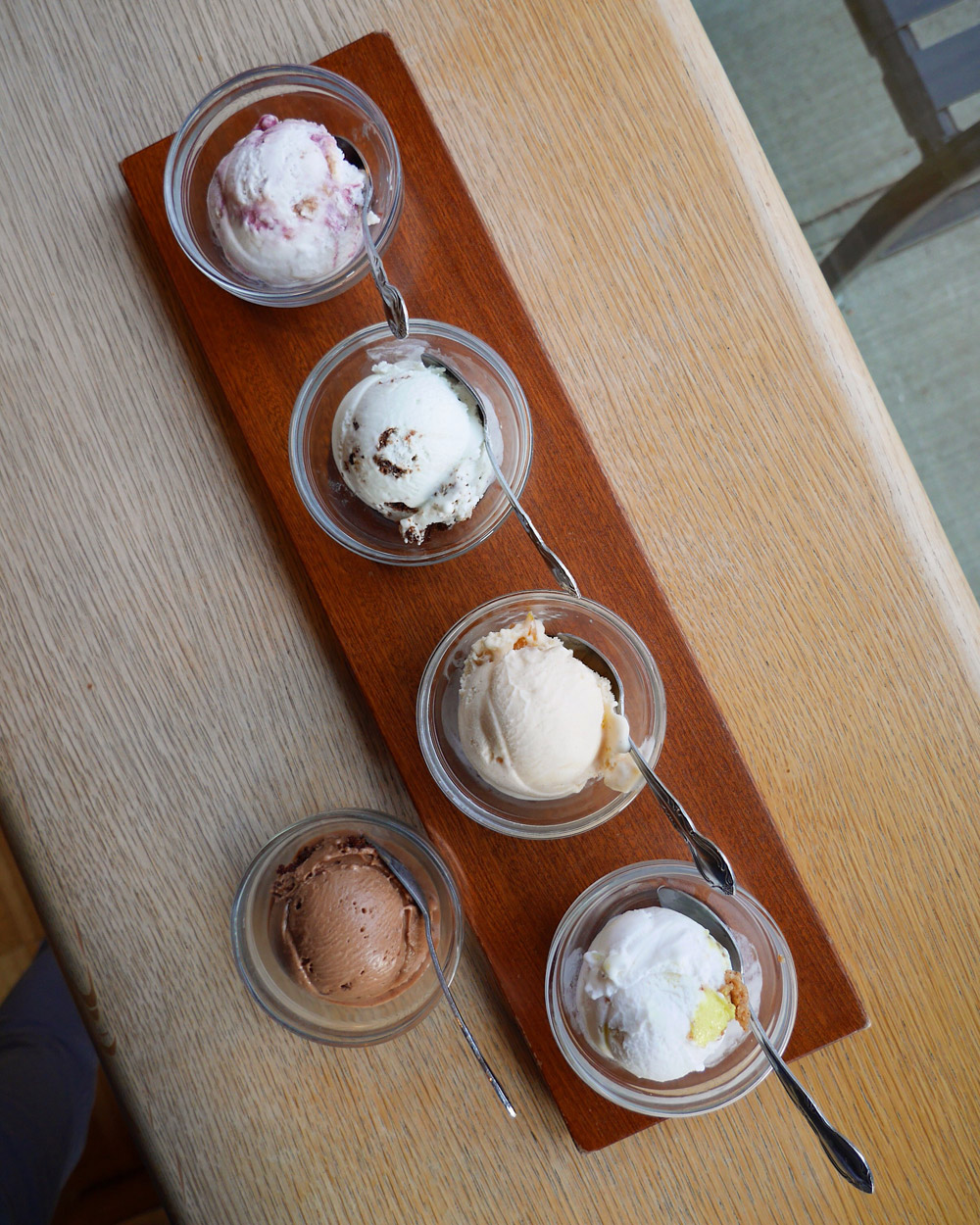 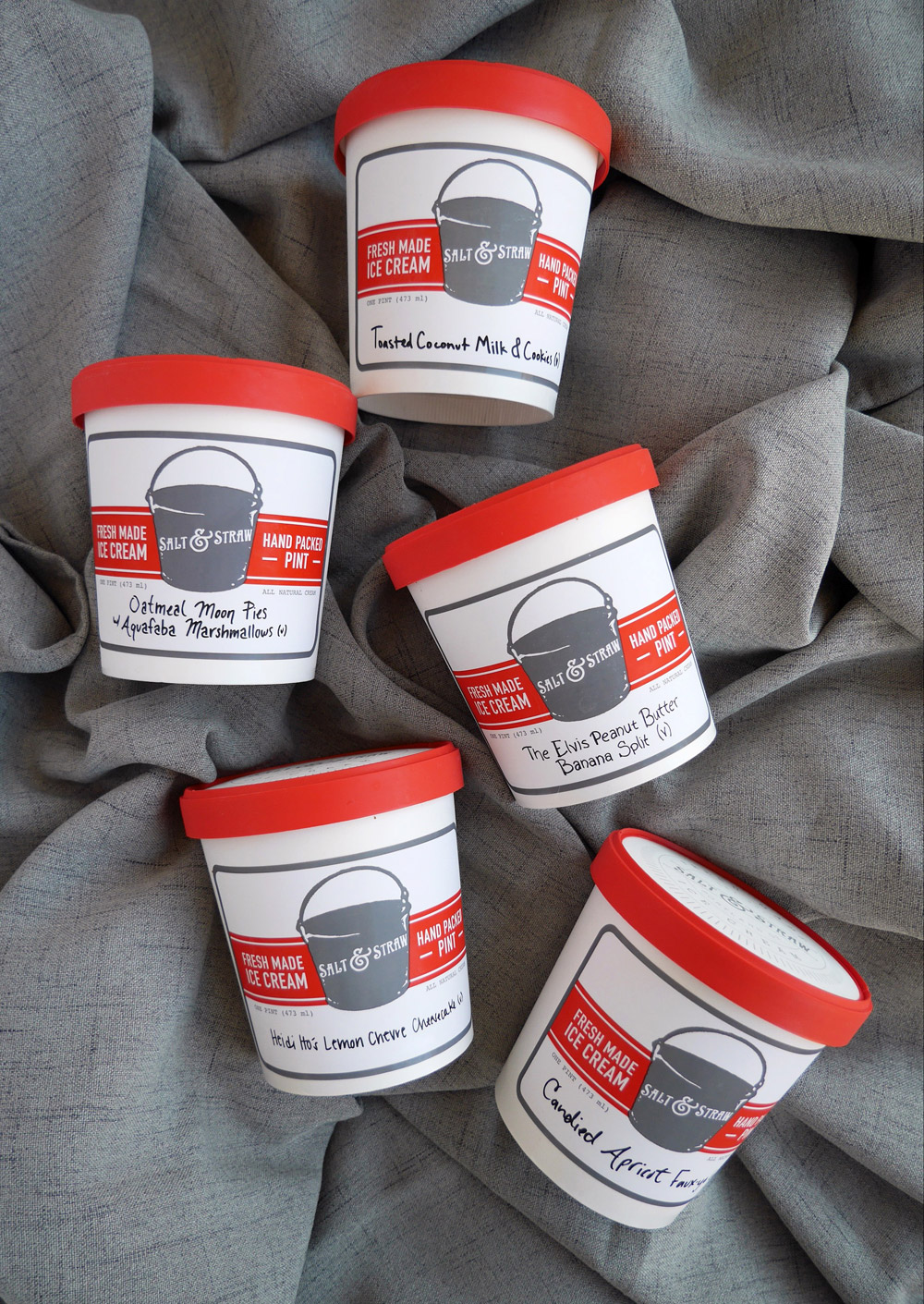 Note: This post is in collaboration with Salt & Straw. I received a delivery of Salt & Straw’s January vegan ice cream specials. This was not in exchange for a positive review and all opinions expressed here are my own. 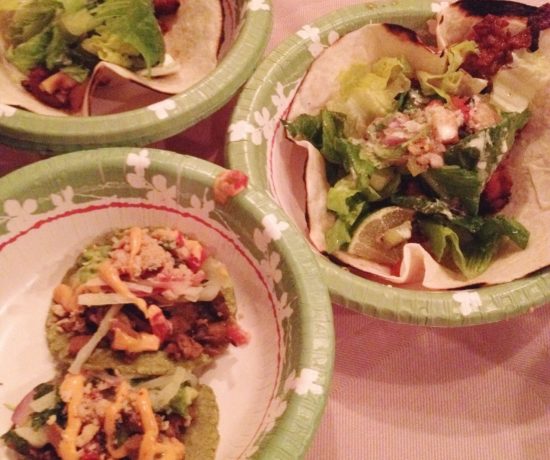 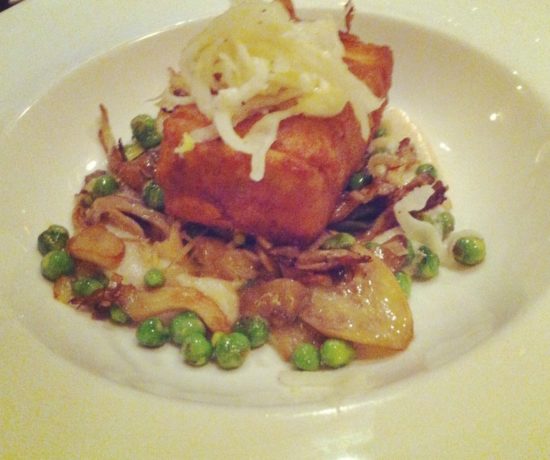 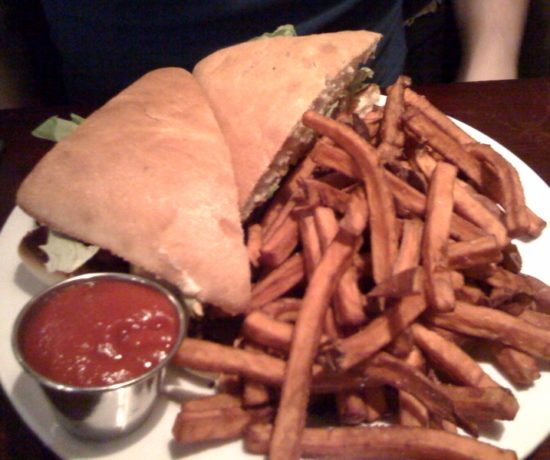