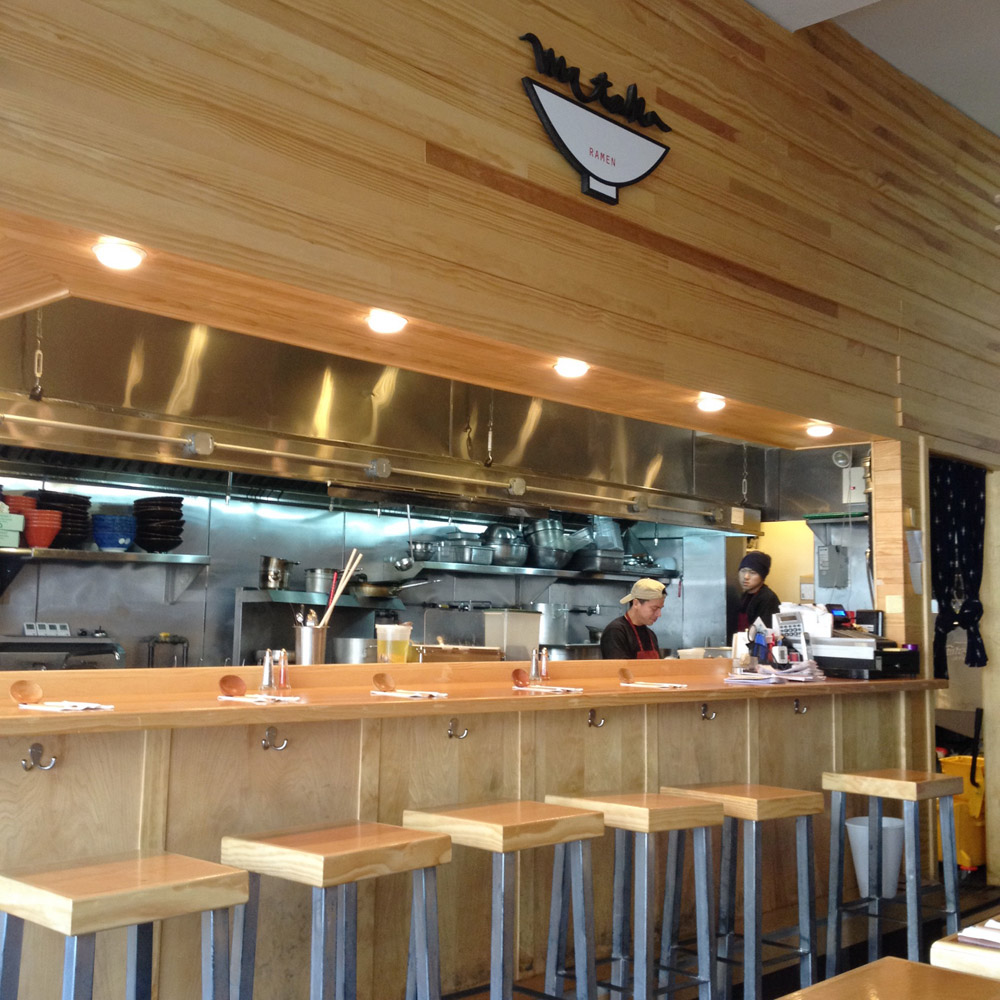 Over the past few months, new ramen shops have been popping up all over NYC! Located on the Lower East Side, Mr Taka Ramen is a collaboration between Chef Takatoshi and Chef Takayuki, both hailing from Japan, of course. The interior is your typical ramen-ya: lots of wood, clean, minimal, light, and airy. There was no wait at lunchtime, but I’ve heard about the 30 minute wait for dinner. P.S. Mr Taka is cash only. 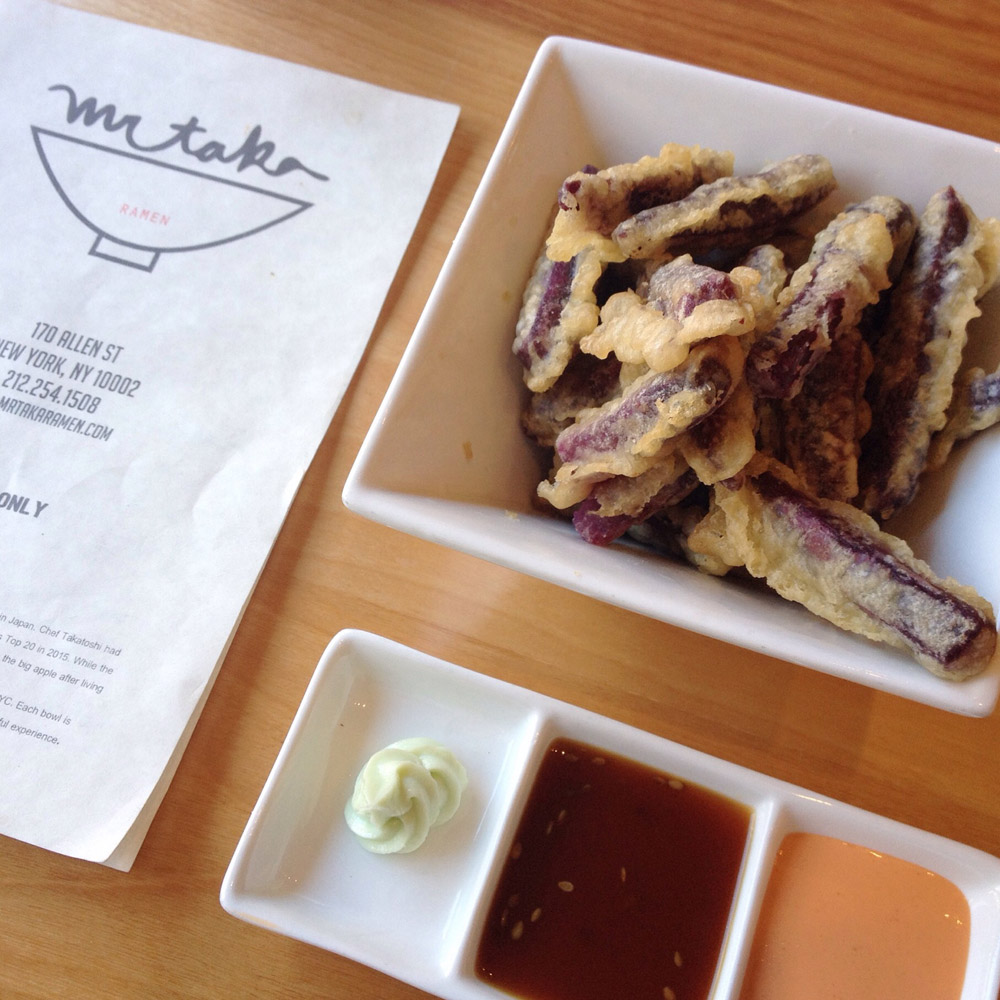 I visited Mr Taka with fellow food blogger, Ron of Gratuitous Foodity, and while I waited for him, I munched away on the sweet potato tempura ($7). Purple Japanese sweet potato with three dipping sauces: wasabi mayo, a gingery soy sauce (?), and spicy mayo. 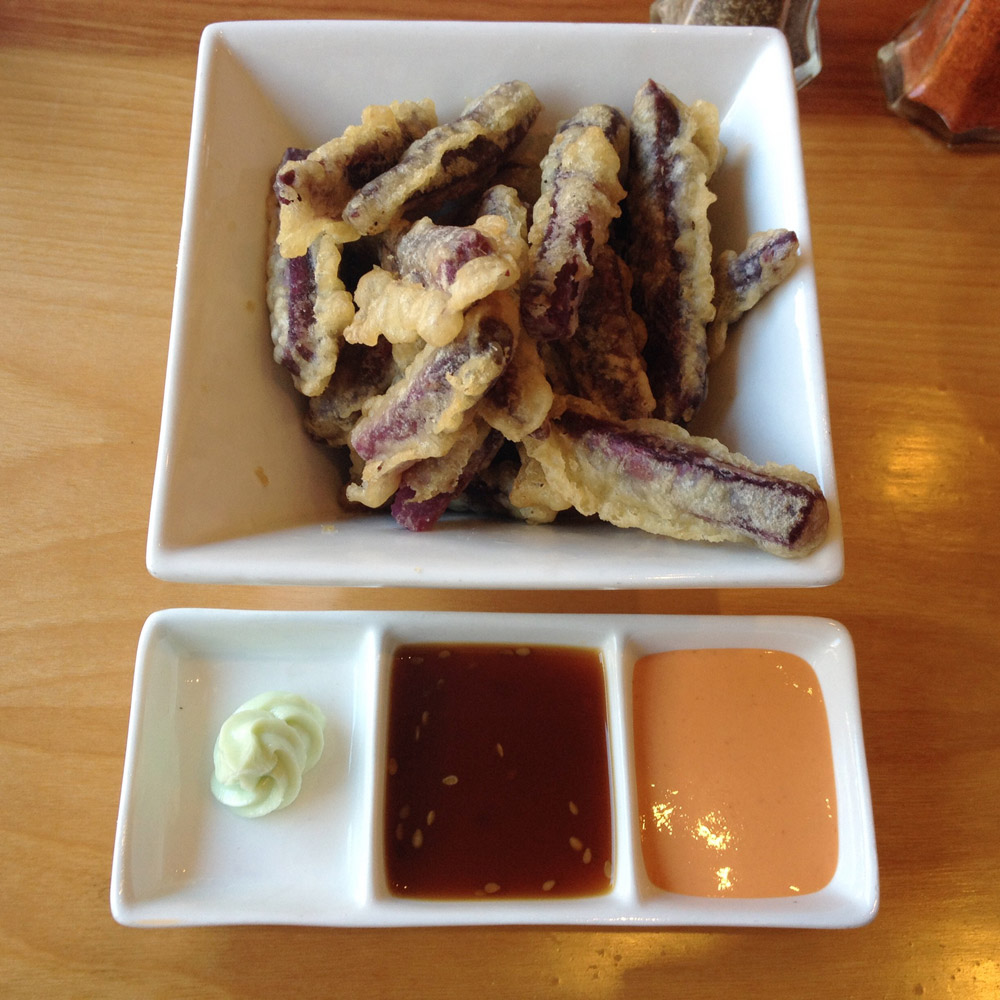 The tempura was pretty decent, and the purple color of the sweet potato was a fun touch, but the sauces were the best part. Unless you’re very hungry like I was, I would recommend sharing it with a friend as it’s quite filling. Don’t wanna be too full for the main attraction. 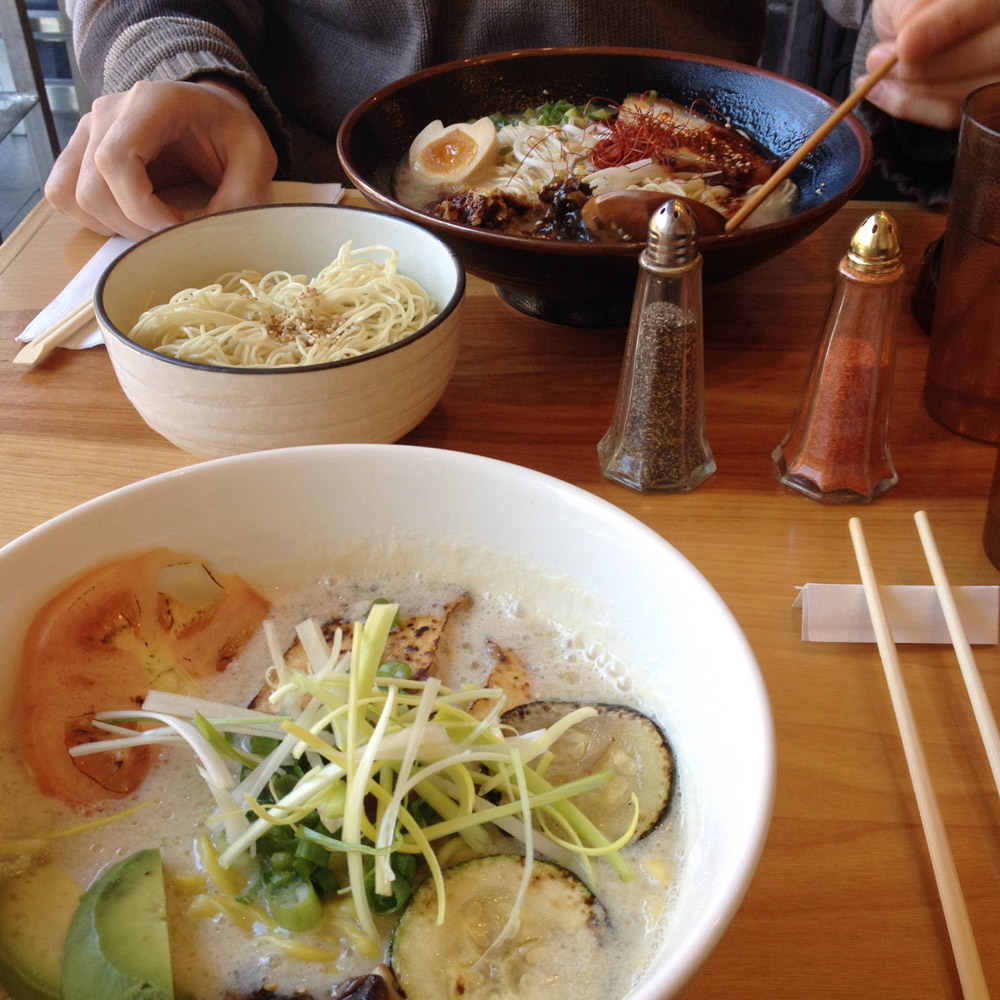 Ron got the spicy tonkotsu ramen ($16) with extra noodles ($2). I was surprised that they used thin noodles here. Pork broth, spicy paste, spicy oil, sliced pork belly, pulled pork, scallions, kikurage mushrooms, bean sprouts, sesame seeds, soft boiled egg, fried garlic. Even though my tonkotsu eating days are far behind me, I’ll admit that this was a good looking bowl, and according to Ron, it tasted pretty good too. 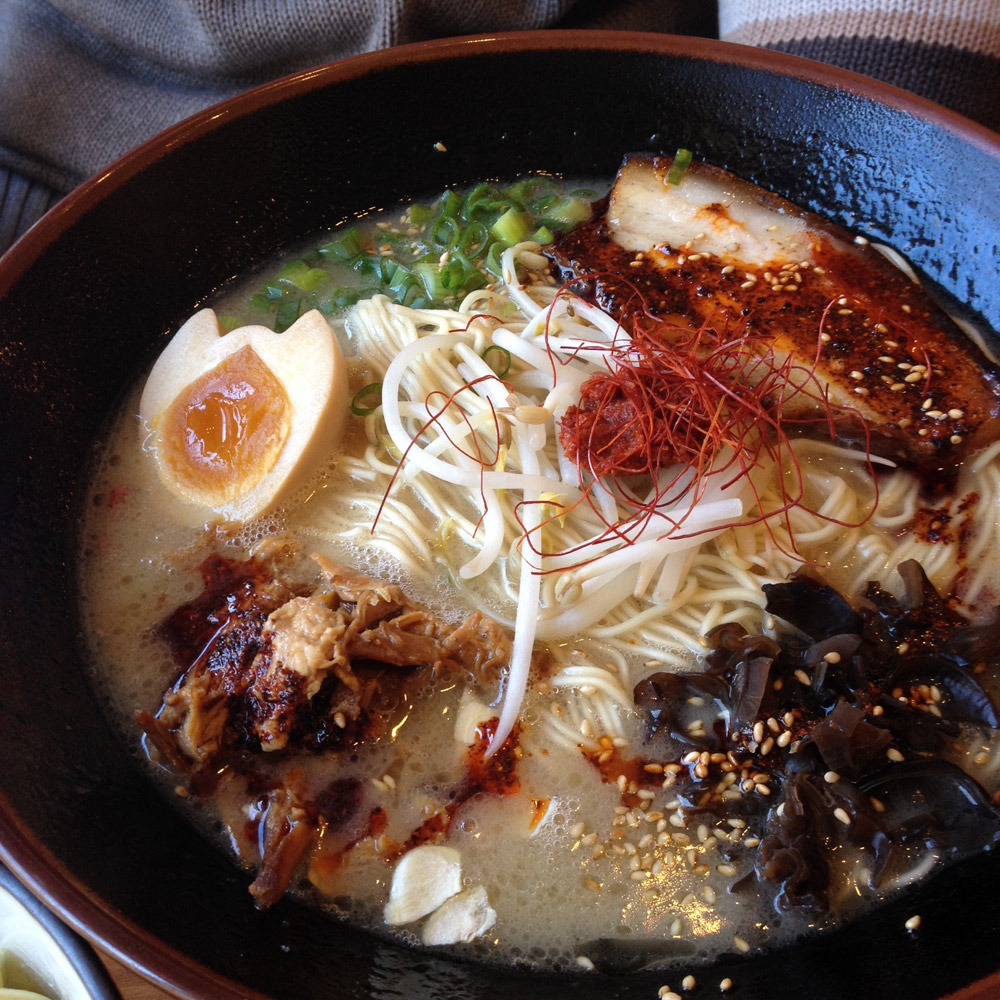 I got the vegetarian ramen ($15), which is listed as on the menu as vegan friendly. I checked with the waitress, and she confirmed that the noodles are egg-free. So if you say no to the egg topping, this would be vegan! I was tempted to go spicy since it was such a chilly day, but opted for the regular version to get a better taste of the broth on my first visit. 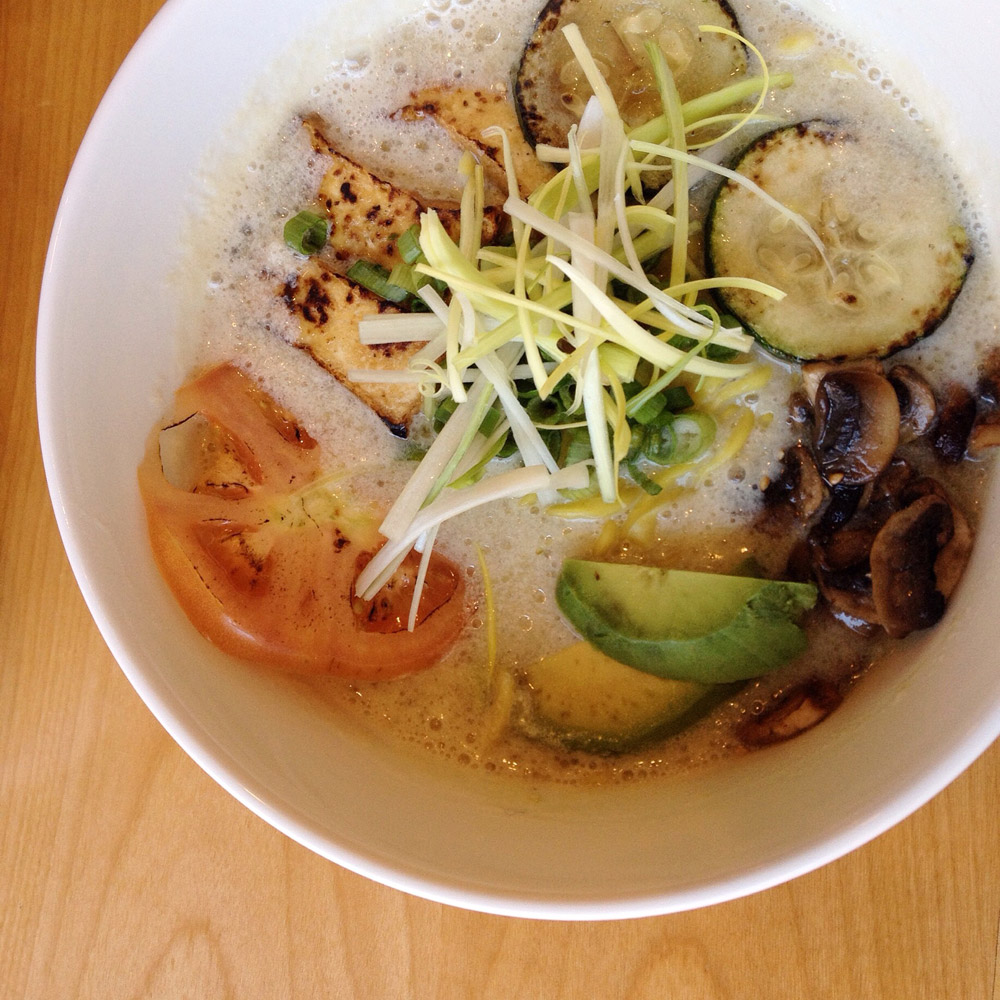 Mr Taka does a vegetable broth with soy milk mixed in for extra richness. Unlike other soy milk broths I’ve had, this one was not bland at all. Quite the opposite in fact. The frothiness due to the oil in the broth is a bit odd, but maybe that’s why it tastes so good. Visually, it could use some improvement. Maybe the spicy version has some extra color to spruce it up? 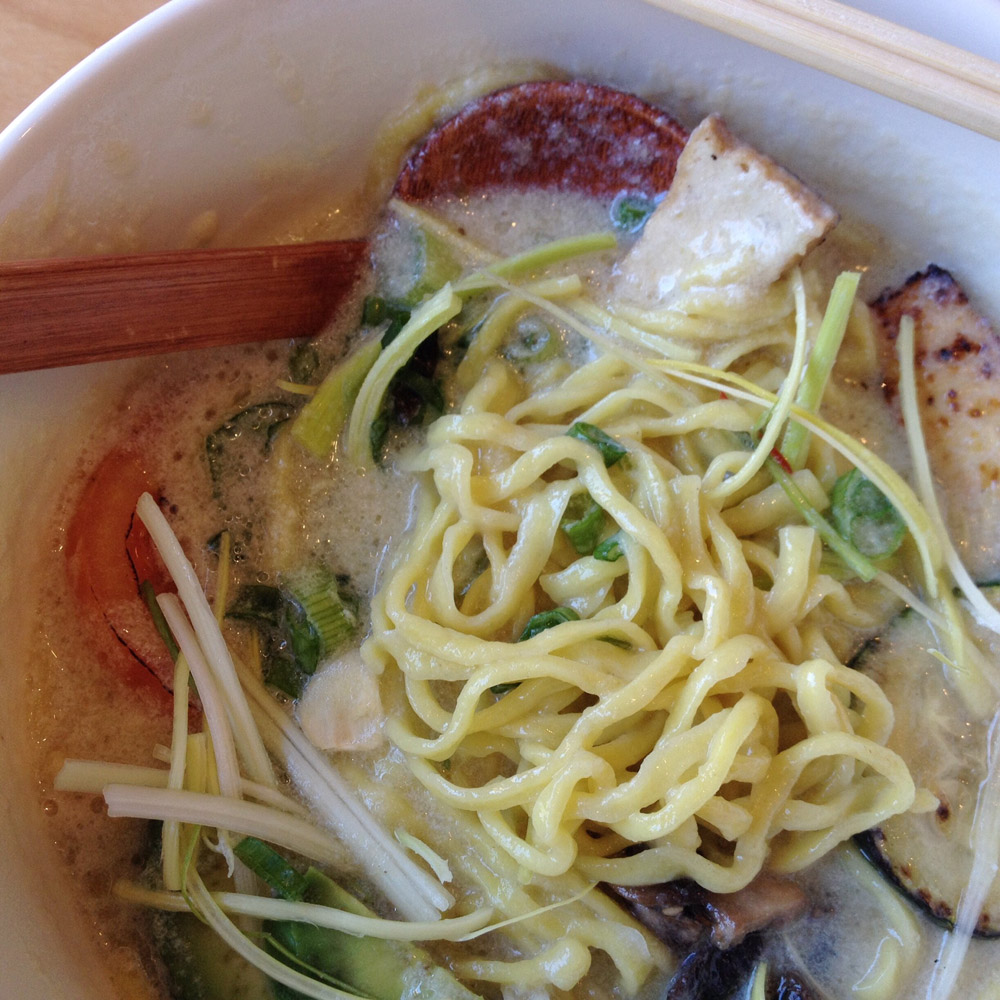 The thick, wavy noodles were pretty good, but I wouldn’t mind if they were slightly firmer. They’re generous with the toppings, which included avocado, zucchini, tomato, mushrooms, tofu, leeks, and scallions. Pretty tasty overall. The mushrooms and zucchini were especially salty, but go well with the milky broth and noodles. 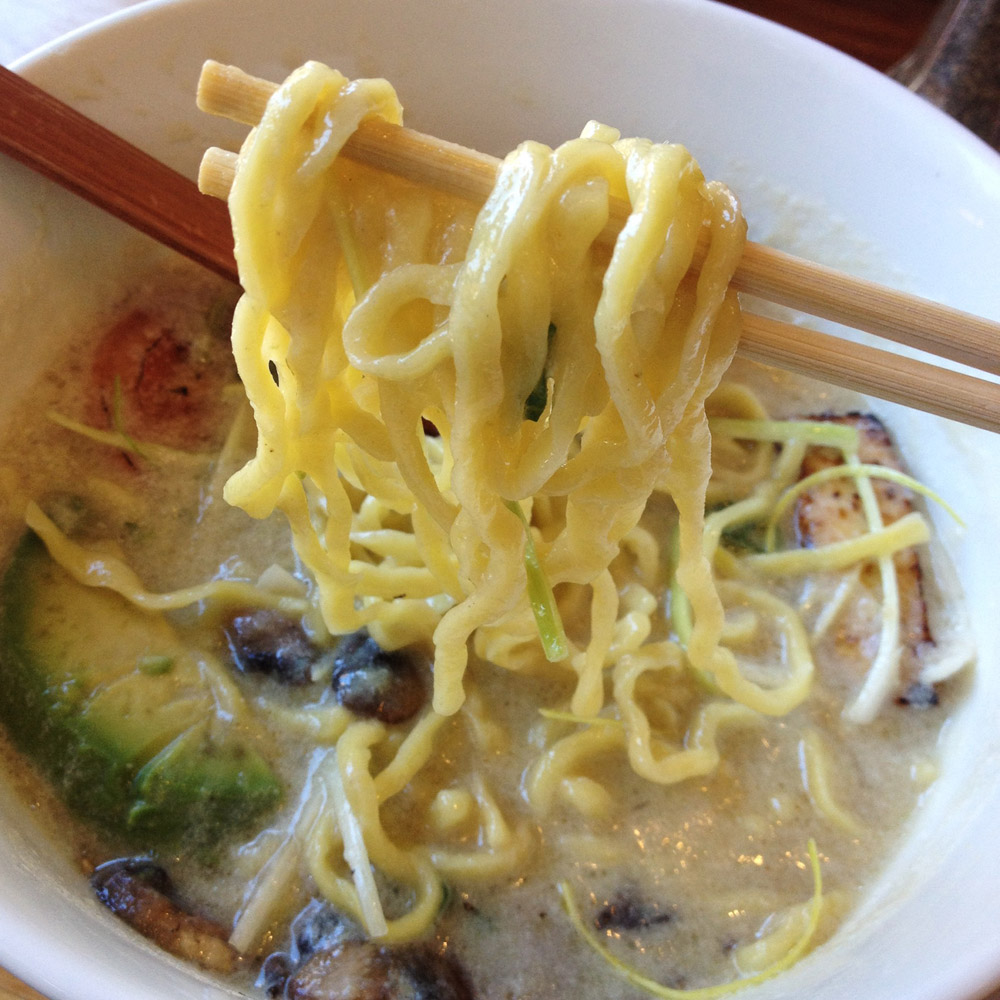 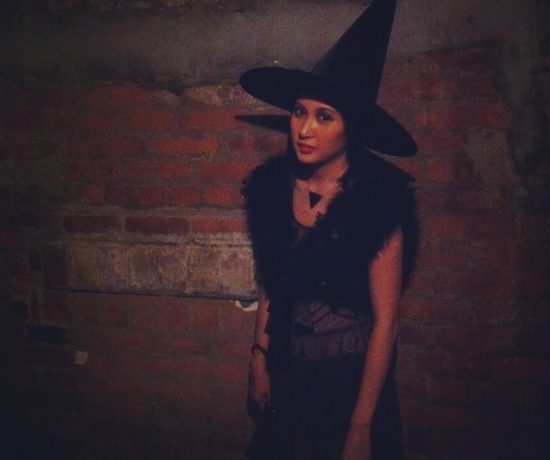 Halloween at the McKittrick Hotel, Chelsea